The Navajo Nation and the US state of New Mexico have reached multimillion-dollar settlements with mining companies to resolve claims stemming from a 2015 spill that resulted in rivers in three western states being fouled with a bright yellow plume of arsenic, lead and other heavy metals, officials confirmed on Wednesday.

Under the settlement with the Navajo Nation, Sunnyside Gold Corp – a subsidiary of Canada’s Kinross Gold – will pay the tribe $10m. New Mexico’s agreement includes a $10m payment for lost tax revenue and environmental response costs as well as $1m for injuries to the state’s natural resources.

The spill released 3 million gallons (11 million litres) of wastewater from the inactive Gold King Mine in southwestern Colorado. A crew hired by the US Environmental Protection Agency triggered the spill while trying to excavate the mine opening in preparation for a possible clean-up.

The wastewater made its way into the Animas River and eventually down to the San Juan River, setting off a major response by government agencies, the tribe and private groups.

Water utilities were forced to shut down intake valves, and farmers stopped drawing from the rivers as the plume moved downstream.

The tribe said the toxic water coursed through 200 miles (322km) of rivers on Navajo lands.

“The Gold King Mine blowout damaged entire communities and ecosystems in the Navajo Nation,” Navajo Nation President Jonathan Nez said in a statement announcing the settlement. “We pledged to hold those who caused or contributed to the blowout responsible, and this settlement is just the beginning.”

The tribe’s claims against the EPA and its contractors remain pending. About 300 individual tribal members also have claims pending as part of a separate lawsuit.

The EPA under the Obama administration had claimed that water quality quickly returned to pre-spill levels. But New Mexico officials, tribal leaders and others voiced ongoing concerns about heavy metals collecting in the sediment and getting stirred up each time rain or snowmelt results in runoff.

State officials said the Animas Valley is now well within irrigation standards. But farmers continue to see lower sales because of the stigma left behind by the spill.

New Mexico Attorney General Hector Balderas, who has been shepherding the state’s legal claims, said in a statement that he was pleased to settle this part of the case and that it marks a step towards holding polluters accountable.

“It is now the US EPA who must step up and take responsibility,” Balderas said. “I will continue to fight to protect our most vulnerable communities and pristine environment, especially from the federal government, which should be held responsible to these communities too.”

In August, the US government settled a lawsuit brought by the state of Utah for a fraction of what that state was initially seeking in damages.

In that case, the EPA agreed to fund $3m in Utah clean water projects and spend $220m of its own money to clean up abandoned mine sites in Colorado and Utah.

After the spill, the EPA designated the Gold King and 47 other mining sites in the area a Superfund clean-up district. The agency is still reviewing options for a broader clean-up. 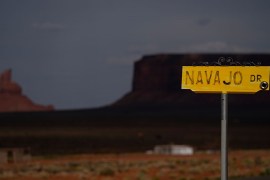 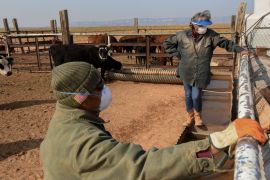 Decades of severe drought and climate change are drying the lifeblood of Navajo ranchers.

Why has Navajo Nation been hit so hard by the coronavirus?

Navajo Nation has the highest per capita infection rate in US, highlighting centuries of neglect, native leaders say. 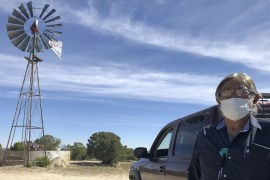 Can the Navajo Nation survive coronavirus?

As Navajo communities in the US reel from the impact of COVID-19 we ask what can be done to fight back.