A Black man who was shot in the back by a white police officer in the US state of Wisconsin, triggering several nights of violent protests in mid-2020 and leaving him partially paralysed, said in an interview broadcast on Thursday that he was prepared to surrender just before the officer opened fire.

Jacob Blake, 29, said an interview with ABC’s Good Morning America that during a struggle with Kenosha police who were trying to arrest him on August 23 on an outstanding warrant his pocketknife fell from his pants. He said he picked it up before heading to a vehicle to drive away with two of his children in the backseat.

“I’m not really worried. I’m walking away from them, so it’s not like they were going to shoot me,” Blake said.

Blake said that he was prepared to surrender once he put the knife in the vehicle.

“Throw myself to the ground and you know, put my arms behind my back because if they did it there and they killed me there, everybody would see it,” he said.

Officer Rusten Sheskey told investigators that he feared that Blake was going to stab him, so he opened fire. Blake family lawyer Ben Crump, however, has questioned whether Blake threatened Sheskey with a knife, saying “nowhere does the video footage show a knife extended and aimed to establish the requisite intent.”

Kenosha erupted with violent protests for several nights after Blake was shot. Hundreds were arrested, and multiple businesses were destroyed. A Wisconsin prosecutor on January 5 declined to file charges against Sheskey, concluding he could not disprove the officer’s contention that he acted in self-defence.

In the Good Morning America interview, Blake, who was shot seven times, said he shouldn’t have grabbed his knife. He said he “wasn’t thinking clearly.” He said he could not hear officers’ orders to comply before he was shot.

“I was counting down my breaths, my blinks and I was like ‘God I’m coming. I guess this is it for me,’” he said.

He said his thoughts turned to his sons in the backseat.

“’Daddy loves you no matter what,’” Blake said he told them. “I thought it was going to be the last thing I say to them.” 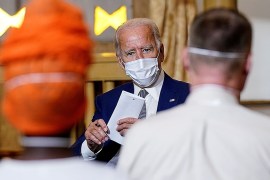 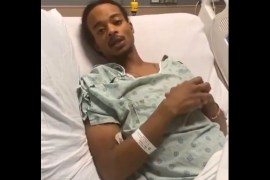 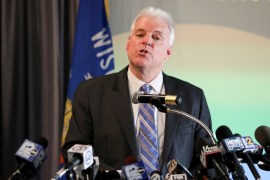 No charges against police officer who shot Jacob Blake

Kenosha district attorney says no police offices to face charges for shooting of Jacob Blake, a Black man, in August.