Authorities pinpointed the location of the cockpit voice and flight data recorders from a crashed Indonesian jet on Sunday, items crucial to understanding what happened to the aircraft that went down with 62 people on board.

Indonesian divers also located parts of the wreckage of a Boeing 737-500 in the Java Sea as rescuers pulled out body parts, pieces of clothing and scraps of metal from the waters where the Siriwijaya Air flight SJ182 carrying 62 people crashed.

“The two signals emitted by the black box are continuously monitored and now we have them marked,” said Hadi Tjahjanto, Indonesian Armed Forces chief.

“Hopefully in not too long we can lift up the black boxes for the National Transportation Safety Committee to investigate and find out the cause of the crash.”

Divers recovered parts of the plane about 23 metres (75 feet) below the water’s surface, the transport ministry said in a statement.

“We are sure that is the point where the plane crashed,” he said in the statement, expressing hope that weather conditions and “the view under the sea are still good so that we can continue the search” on Sunday.

Indonesia’s chequered air safety record is again in the spotlight after the plane went down. Before the crash there had been 697 fatalities in Indonesia over the last decade including military and private planes, making it the deadliest aviation market in the world – ahead of Russia, Iran and Pakistan – according to Aviation Safety Network’s database.

The break in the search for Sriwijaya Air flight SJ182 came after sonar equipment on a navy ship detected a signal from the aircraft at a location that fit the coordinates from the last contact made by the pilots before the plane went missing on Saturday.

The plane headed to Pontianak in West Kalimantan crashed shortly after takeoff from the Indonesian capital, Jakarta.

“I represent the government and all Indonesians in expressing my deep condolences for this tragedy,” President Joko Widodo said. “We are doing our best to save the victims. We pray together so that the victims can be found.”

The nearly 27-year-old aircraft was much older than Boeing’s problem-plagued 737 MAX model, one of which crashed off Jakarta in late 2018, killing all 189 people on board the Lion Air flight.

Older 737 models are widely flown and do not have the system implicated in the MAX safety crisis.

“We are in contact with our airline customer and stand ready to support them during this difficult time,” Boeing said in a statement. “Our thoughts are with the crew, passengers, and their families.”

Fishermen in the area around the Thousand Islands, a chain of islands north of Jakarta’s coast, reported hearing an explosion about 2:30pm (07:30 GMT) on Saturday.

“We heard something explode; we thought it was a bomb or a tsunami since after that we saw the big splash from the water,” fisherman Solihin, who goes by one name, told The Associated Press by phone.

“It was raining heavily and the weather was so bad. So, it is difficult to see around clearly. But we can see the splash and a big wave after the sounds. We were very shocked and directly saw the plane debris and the fuel around our boat.”

Authorities established two crisis centres, one at the airport and one at the port. Families gathered to wait for news of loved ones. The 62 people on board included seven children and three babies.

“I have four family members on the flight – my wife and three children,” Yaman Zai said as he waited at the Pontianak airport on Saturday night. “[My wife] sent me a picture of the baby today … How could my heart not be torn into pieces?” he said as he sobbed.

On social media, people began circulating the flight manifesto with photos and videos of those who were listed as passengers. One video shows a woman with her children waving goodbye while walking through the airport.

Transportation Minister Budi Karya Sumadi said Flight SJ182 was delayed for an hour before it took off at 2:36pm (07:36 GMT). It disappeared from radar four minutes later, after the pilot contacted air traffic control to ascend to an altitude of 29,000 feet (8,839 metres), he said.

Sriwijaya Air President Director Jefferson Irwin Jauwena said the plane, which was previously used by airlines in the United States, was airworthy. He told reporters on Saturday that the plane had previously flown to Pontianak and Pangkal Pinang city on the same day.

“Maintenance report said everything went well and airworthy,” Jauwena told a news conference. He said the plane was delayed due to bad weather, not because of any damage.

Founded in 2003, the Jakarta-based Sriwijaya Air group flies largely within Indonesia. The budget airline has had a solid safety record, with no on-board casualties in four incidents recorded on the Aviation Safety Network database.

In 2007, the European Union banned all Indonesian airlines following a series of crashes and reports of deteriorating oversight and maintenance since deregulation in the late 1990s. The restrictions were fully lifted in 2018.

Between 2007 and 2016, the United States Federal Aviation Administration lowered its Indonesia safety evaluation to Category 2, meaning its regulatory system was inadequate. 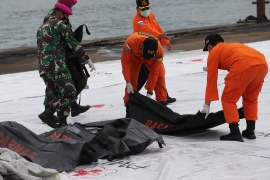 Indonesian ships with rescue divers locate jet debris after it crashed into the sea minutes after takeoff on Saturday. 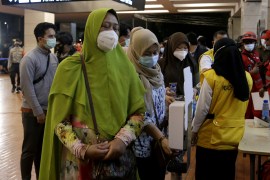 Aircraft with 62 people on board is missing after it plunged into a steep dive minutes after takeoff from Jakarta. 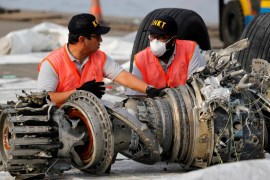 Incorrect assumptions on how an anti-stall device functioned and how pilots would react cited as factors of the crash.