South Koreans will give up some of their most cherished traditions as they celebrate Chuseok, the country’s biggest holiday, as the coronavirus forces people to reconsider plans to return to their hometowns, and change the way they honour their ancestors.

Authorities have urged people to avoid travel and follow physical-distancing guidelines during the five-day break, which starts on Wednesday. Millions usually visit their hometowns during the autumn holiday and the government is concerned mass travel will risk spreading the virus.

“We’d like to ask everyone to build family bonds and say hello to each other in a non-contact manner during this year’s Chuseok for the safety of your families and all of us,” Health Minister Park Neung-hoo said at a recent virus briefing. “We can have video calls with each other or use video conferencing for family gatherings.”

The country reported 113 new cases on Wednesday – the first time the number has been in triple digits for five days – following a resurgence of cases in the Seoul area that began in mid-August, and forced physical distancing and other measures to be strengthened.

“(We) are observing Chuseok at a difficult time,” President Moon Jae-in said in a video message released for the holiday, which begins on Thursday and continues until Sunday. “The government will surely repay the people who have endured difficulties by succeeding in controlling the virus and protecting the economy.”

Honour from the heart

Lee Yong-su, 34, whose ancestors founded Korea’s last ruling dynasty of Joseon, said he would not make the customary visit to his parents, and had instead decided to stay at home with his pregnant wife and six-year-old son.

“My father said we can honour our ancestors from the heart, sharing a news article about how other famous families would skip this year’s service in bad years,” Lee told Reuters news agency.

Lee Chi-eok, the 17th-generation descendant of Lee Hwang, one of the greatest Korean Confucian scholars from Joseon, said some of the old traditions were fading even before the novel coronavirus struck, thanks to increasing urbanisation, lower birth rates and an ageing population.

His family once performed dozens of rites every year, involving complex rules about how to prepare and place food offerings. This year, in line with the COVID-19 guidelines, there will be none.

“Those rituals were a formal yet welcoming party in slow agricultural communities, where people gather and enjoy good food, but the current fast-paced society can’t afford it,” said Lee, a research fellow at the Academy of Korean Studies.

Korean media reported that cemeteries and memorial homes greeted fewer visitors than usual on the first day of the holiday, with some offering online services.

84-year-old Chung Seong-ran enlisted the help of one of her care workers when she decided to send a video greeting to her daughter for Chuseok .

“Please, always wear masks and be vigilant! Mummy is eating well and doing fine at home. I only worry about you. I love you,” Chung said in the 15-second video clip – the first one she’s ever recorded.

Chung’s daughter, Kang Myoung Suk, who lives in the Seoul area, said when she received her mother’s message, she “felt really happy”.

Chung had been to visit her in June, but the worsening outbreak meant that was the last time they had not seen each other since.

“My heart sank whenever I saw news about big outbreaks” near her daughter’s place, Chung told AP news agency.

Airport authorities have said the number of people taking domestic flights will drop by 25 percent compared with last year, and local media showed relatively empty train and bus stations on Wednesday, although Seoul airport’s domestic terminal was bustling with travellers.

Surveys of residents in the greater Seoul area – where more than half of South Korea’s 51 million people live – showed that most were not planning to visit relatives during Chuseok.

Still, more than 230,000 people are expected to visit the resort island of Jeju this week, compared with 190,000 last year, local authorities said.

Many golf courses and beach resorts along the east coast are fully booked.

“Many of my friends were planning a trip instead of visiting their parents,” said Ko Dong-hee, a 35-year-old housewife. “I’m still going to visit my in-laws, which isn’t my choice but at least they’re holding simplified ancestral rites.” 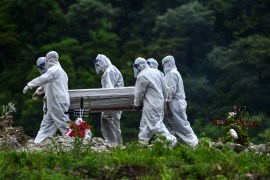 The US has reported a fifth of all deaths from COVID-19, which first emerged in China late last year. 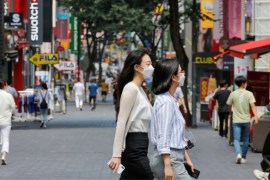