Iranian Foreign Affairs Minister Mohammad Zarif has blasted the efforts of the United States government to reimpose sanctions during a digital address to the Council on Foreign Relations, calling the US an “irresponsible actor”.

The administration of US President Donald Trump has taken a hardline stance on Iran, pulling out of the 2015 Joint Comprehensive Plan of Action (JCPOA), commonly called the Iran nuclear deal.

The deal between Iran and world powers saw Tehran agree to curb its nuclear programme and allowing for regular, international inspections of their nuclear facilities in exchange for the lifting of certain international sanctions. It was hailed as an achievement of diplomacy, but the US unilaterally withdrew from the deal in 2018.

In his address on Monday, Zarif said Iran took a great step to engage with the administration of former US President Barack Obama.

“We did that with [Former State Secretary John Kerry]. It wasn’t easy to start the negotiations, which resulted in JCPOA, those were extremely difficult negotiations, based on not mutual trust but mutual respect.”

Zarif told the CFR Iran needs the US to offer concessions as a sign of good faith to “renegotiate what has already been negotiated … And I think after these very difficult years of [US President Donald Trump], it is important for the United States to send the right signals to Iran, that it is willing to end this … policy of pressure.”

Almost simultaneously as Zarif made the comments, Trump announced an executive order blocking access to financial assets of those who engage in arms trade or training with Tehran, which he claims is necessary to enforce the UN arms blockade set to expire in October under the JCPOA.

“The United States has now restored UN sanctions on Iran,” Trump said in a statement issued shortly after he signed an executive order spelling out how the US will enforce the “snapback” of the sanctions. “My actions today send a clear message to the Iranian regime and those in the international community who refuse to stand up to Iran.”

Though the US, which has reimposed some sanctions on Iran since leaving the JCPOA in 2018, is adamant about a broader reimposition of UN sanctions on Iran, they appear to be alone in their endeavour.

The US order is meant to enforce the “snapback mechanism” of the JCPOA, which resumes sanctions if Iran doesn’t meet its end of the bargain.

But the US cannot enact the mechanism, according to the foreign ministries of Germany, France and the United Kingdom.

The E3 🇩🇪🇫🇷🇬🇧 note that the US ceased to be a participant to the JCPoA following their withdrawal on 8 May, 2018. Consequently, the US attempt to initiate the ‘snapback mechanism’ is incapable of having any legal effect. We remain committed to preserve the nuclear agreement. pic.twitter.com/N3LnmwRT5d

Speaking to reporters with fellow Cabinet secretaries at the State Department, State Secretary Mike Pompeo announced the administration was hitting more than two dozen Iranian individuals and institutions with penalties.

“No matter where you are in the world, you will risk sanctions,” he said, warning foreign companies and officials not to do business with targeted Iranian entities.

Nearly all of them, however, including the Iranian defence ministry and its atomic energy agency, were already subject to US sanctions the administration had reimposed after it withdrew from the deal.

Pompeo said the US was acting because the rest of the world is refusing to confront the Iranian threat.

A UN arms embargo on Iran is set to expire in October under the terms of the nuclear deal, but Pompeo and others insist the snapback has rescinded its termination.

The remaining world powers in the deal – France, Germany, the UK, China and Russia – have struggled to offset the sanctions the US reimposed on Iran after the Trump administration left the pact, which the president said was one-sided in favour of Tehran.

Few UN member states believe the US has the legal standing to restore the sanctions due to the 2018 withdrawal. The US argues it retains the right to do so as an original participant in the deal and a member of the council.

Disagreement over the accord and US legal standing could set the stage for a tense meeting at the UN General Assembly this week. 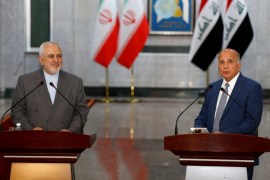 Ties between the neighbours have been turbulent since the US assassinated the Iranian commander in Iraqi in January. 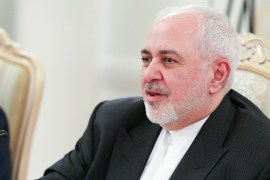 As the US tries to rally support to extend UN arms embargo on Iran it faces scepticism from UNSC members. 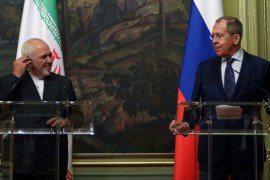 Lavrov says, after meeting Zarif, Russia will do ‘everything’ to preserve nuclear deal between Iran and world powers.