Beirut, Lebanon – A towering inferno at Beirut’s port caused widespread panic in the Lebanese capital, just two days after another fire was put out at the site of an enormous explosion that killed nearly 200 people last month.

The Lebanese army said on Thursday the latest blaze erupted at a warehouse storing oils and tyres in the port’s Duty Free area.

A witness told Al Jazeera she saw people fleeing from the direction of the fire, which sent a large plume of smoke into the sky. She also saw cars reversing in the Mar Mikhael neighbourhood, which was devastated by the August 4 explosion that wounded more than 6,500 people and left hundreds of thousands homeless.

Lebanese civil defence firefighters on the scene said the fire had been brought under control but is not yet extinguished. No injuries have been reported.

Bassem Kaissi, who was appointed as the new director of Beirut’s port following the blast, told Al Jazeera the blaze broke out in a storage area rented from the port by BCC Logistics. He said BCC had been undertaking reconstruction work in the facility when the fire started.

He said BCC had built the facility to meet health and safety requirements, including being equipped with fire extinguishers and fire alarms – but they had been destroyed in the August 4 blast.

Kaissi said no security agencies nor state officials were at the site at the time of the fire, adding that they do not have a presence there because the property is rented from the port and therefore considered private.

“We’re not responsible for it at all,” he said.

Kaissi declined to comment on what may have caused the fire, saying he would wait for investigations to run their course.

Top prosecutor Ghassan Oueidat has tasked all major security agencies with carrying out an investigation into the cause of the fire after being ordered to do so by the country’s Caretaker Justice Minister Marie Claude Najem.

As in the case with the August disaster, firefighters arrived on the scene without being informed of exactly what was on fire -though Lieutenant Michel Murr, who oversees firefighting efforts in Beirut, told Al Jazeera: “We didn’t go in blind.”

Ten firefighters were killed on August 4 after being sent to extinguish the fire caused by the explosion of 2,750 tonnes of ammonium nitrate stored at the port.

Murr said he could not entirely rule out the presence of explosive material in the area, but said it was unlikely.

“We’re being as careful as we can be given the situation,” Murr added.

In addition to further destroying a large part of Beirut’s already decimated port, Thursday’s fire appears to have incinerated aid destined for those who survived the blast last month.

Fabrizio Carboni, regional director for Near and Middle East at the International Committee for the Red Cross, said half a million litres of oil and thousands of food parcels were stored at the warehouse that caught fire.

“The extent of the damage still remains to be established. Our humanitarian operation risks to be seriously disrupted,” he said in a tweet.

Shocking images from the port of Beirut. The warehouse on fire is where @ICRC_lb stocks thousands food parcels and 0.5 million L oil. The extent of the damage still remains to be established. Our humanitarian operation risks to be seriously disrupted.https://t.co/S6l6IA0bdz

A smaller fire broke out at Beirut’s port on Tuesday, leading many to panic, though it was quickly extinguished.

Just a few days before that, the army said it had found 4.35 tonnes of ammonium nitrate at Beirut’s port. It says it has since destroyed the explosive material.

An army source told Al Jazeera security forces were in the process of undertaking a complete survey of the entire port area, but could not say how much had been completed and when the survey would be done.

“The amount of work and the area involved is massive,” he said.

On social media, Lebanese voiced a mixture of rage, fear and fatigue at the latest emergency to grip their capital.

Another huge fire at the Beirut port. Do we open all the windows to guard against another blast or close them to guard against the toxic fumes? The sky is black black above and my lungs hurt. (So does my heart). https://t.co/cpAZj1kCYu

Others raised questions about possible evidence-tampering amid a continuing investigation into the explosion.

Beirut's port is an official crime scene… having back to back fires in it within a few days is not an innocent accident… it cannot be… another investigation should be undertaken to know why is there a fire? And who is responsible?
This is not accidental 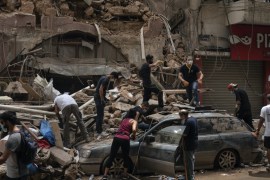 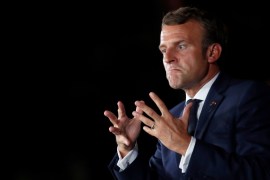