Beirut, Lebanon – Angry protesters have stormed government buildings in Beirut as tens of thousands of people rallied against Lebanon’s ruling class amid growing anger about a deadly explosion at the capital’s port.

Clashes erupted with Internal Security Forces (ISF) almost immediately after protesters, on Saturday, attempted to reach Lebanon’s parliament building, a site they have repeatedly targeted throughout an anti-establishment protest movement that began in October last year.

Thousands participated in riots, settling fires in buildings already destroyed by Tuesday’s explosion and repeatedly charging police, who fought back with a thick fog of tear gas and rubber bullets, as well as a sporadic use of live ammunition fired into the air.

“They’ve taken everything from me – my money, my youth and now they killed my people,” 26-year-old protester Sandra Khoury told Al Jazeera, holding a stick in one hand and a piece of onion – which protesters sniff to alleviate the effects of tear gas – in the other.

In a sign of solidarity with the protesters, Beirut’s fire brigade – which lost at least 10 members in the first response to the explosion – refused to leave their bases to douse protesters with water. Beirut Governor Marwan Aboud formalised the matter by putting out an order saying they should only respond to fires.

One officer died during the clashes, according to the ISF, which said he was attacked by protesters and fell from a hotel in central Beirut. The Lebanese Red Cross, meanwhile, said they took 63 people to hospitals and treated some 175 on the scene.

Later on Saturday, the army and protesters clashed by Beirut’s main ring road near the city centre. Soldiers, empowered by a state of emergency that has been declared in the capital, used sticks to beat civilians, a small number of whom responded by throwing rocks.

“We’ve lost everything,” this man kept shouting at soldiers, after they attacked protesters. pic.twitter.com/swZoTYqtco

“Take off the suit and come stand with us, then you can wear it again with honour,” a protester said as a number of them confronted a line of soldiers.

“Tell us what you get from being with them?” a demonstrator shouted in a hoarse voice. “We really don’t understand it, why are you doing this to us?”

Earlier, demonstrators in Martyrs’ Square erected gallows and hung up cardboard cutouts of Lebanon’s political class, which they blame for the enormous explosion that ripped through Beirut on Tuesday, killing more than 150 people, wounding 6,000 and leaving some 250,000 people without homes.

As they symbolically fitted nooses around the frames of leaders, a rumbling cheer went up from the crowd, a large number of whom wore bandages from wounds sustained in the explosion.

“They’ve drowned us in poverty and debt, and we were silent. Our currency is worth nothing, and we did nothing,” Farah, an 18-year-old student, told Al Jazeera. “But for them to kill us with a blast in Beirut, we’re definitely going to do something.”

In unison, the protesters chanted curse-filled slogans against President Michel Aoun and Hezbollah, among others.

Protestors have taken over the #Lebanon economy ministry, throwing down a rain of documents and a picture of President Michel Aoun. A man next to me shouts “focus on the bills man, tear up my bills.” pic.twitter.com/RAHtyOyk6K

By sunset, protesters had taken over the foreign and energy ministries and raided the economy and environment ministries, as well as the headquarters of the Association of Banks in Lebanon.

From the sixth floor of the economy ministry, located in central Beirut, they threw out documents and a picture of Aoun, and set fires which burned into the night.

As the documents rained down, many in the crowd began picking them up and sifting through, looking for signs of systemic corruption by the political elite. “Focus on my bills, tear up the bills,” one protester shouted, jokingly.

At the foreign ministry, protesters hung up a banner reading, “Beirut, capital of the revolution.”

“We have overtaken the headquarters of the foreign ministry and consider it the base of the October 17 revolution on the basis that the Ministry of Foreign Affairs is the face of Lebanon to the outside world,” said former General Sami Rammal, referring to an anti-establishment protest movement that erupted in the country last year.

“Tonight, we will sleep here. They can take us out with bullets, but we will not leave out of our own free will.”

Later on Saturday, the army stormed the ministry and kicked the protesters out.

Absolutely staggering numbers toay in #Beirut. Square split between peaceful on one side and rioting on the other. We’re hearing live fire every now and then. Over 100 injured so far. #LebanonProtests pic.twitter.com/C4cpYhyJIQ

In a televised address on Saturday evening, Prime Minister Hassan Diab, whose cabinet won a vote of confidence in Parliament in February after former Prime Minister Saad Hariri’s government was forced to resign in the face of the mass anti-establishment protests, said he would introduce a draft bill on Monday to hold an early election.

It remained unclear when the vote would be held, if the bill was passed, though Diab said he would stay at his post for two more months.

Officials have linked Tuesday’s blast to 2,750 tonnes of ammonium nitrate stored at the port for more than six years – a fact seen by many Lebanese as an indictment of the country’s ruling class.

The protests come about 10 months after Lebanese from across the country’s religious and political divides began staging mass demonstrations demanding the ruling class be held accountable for years of mismanagement and corruption.

At the peak of those protests, some would spend the night in central Beirut, but most would return to their homes.

Following the explosion, however, many of these protesters do not have homes to return to.

“If you don’t fight corruption, this is what would happen – let that be a message to all democracies in the world,” a protester told Al Jazeera. 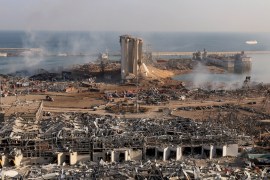 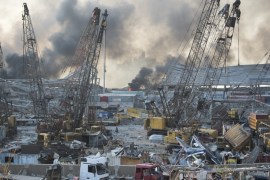 On August 4, a failing state, through negligence and corruption, destroyed its own capital and killed its own citizens.