A court in New Zealand is set to begin sentencing on Monday of an Australian man who murdered 51 Muslims as they prayed in the city of Christchurch last year.

Brenton Tarrant, a self-confessed white supremacist, pleaded guilty in March to 51 murder charges, 40 of attempted murder and one charge of committing a terrorist act. The plea came a year after Tarrant attacked people attending Friday prayers at two mosques with semi-automatic guns, streaming the shooting live on Facebook.

During the four-day sentencing hearing at the Christchurch High Court, Judge Cameron Mander will hear statements from 66 survivors of the attack.

The court was sealed off on Monday morning with sniffer dogs checking lines of court staff and media queuing outside in the drizzle.

Tarrant, who is likely to be present in the courtroom and is representing himself, got off a New Zealand Air Force plane at Christchurch Airport on Sunday afternoon. Television footage showed him wearing a protective vest and helmet as armed officers escorted him into the back of a white van.

He will be sentenced after being allowed to make a statement.

With wounds still raw from the attack – New Zealand’s worst mass shooting in recent history – Mander said the sentencing was an important milestone for victims.

“Finality and closure is considered by some as the best means of bringing relief to the Muslim community,” the judge said in the lead-up to the hearing.

‘People need to be heard’

Prime Minister Jacinda Ardern said it would be a difficult week for many.

“I don’t think there’s anything I can say that is going to ease how traumatic that period is going to be,” she told reporters on Friday.

“The whole process is likely to take some time, that’s as it should be, people need to be heard.”

Tarrant faces life imprisonment, with a non-parole period of 17 years. But the judge has the power to decide on imprisoning him without the possibility of release, which means Tarrant would be imprisoned for the rest of his life. Such a sentence has never been imposed in New Zealand.

Authorities are intent on preventing Tarrant, who sacked his lawyers last month, from using the hearing to cause further harm. He has tried sending coded messages previously, flashing an “OK” hand gesture used to signal white power during his first court appearance.

Mander has imposed extraordinary restrictions on media to ensure that even if the 29-year-old spouts neo-Nazi propaganda from the dock it does not gain publicity. Providing live updates – a common practice for media covering court cases – has been banned.

Instead, Mander will inform media after each court session what can and cannot be reported, with any breaches likely to result in a contempt of court charge.

“The court has a duty, particularly in the context of offending against the Terrorism Suppression Act, to ensure it is not used as a platform … (and) to prevent it being used as a vehicle for further harm,” he said.

Tarrant stormed into the Al Noor mosque in Christchurch on March 15 last year, shooting at worshippers, including women and children, before attacking another neighbouring mosque. He was arrested on the way to a third attack.

A manifesto posted online by Tarrant shortly before he carried out the attacks, and video recordings of the mosque shootings have been banned by New Zealand’s censor board.

The attack led to a ban on firearms in New Zealand and Ardern led a campaign against hate content online, a response that was hailed as a model for other countries. 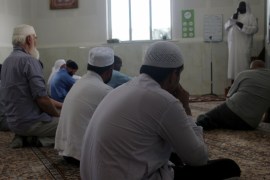 Building unity in New Zealand a year after Christchurch attacks

Plans due to be unveiled to rebuild Linwood Islamic Centre as community hub in fusion of Islam and Maori culture. 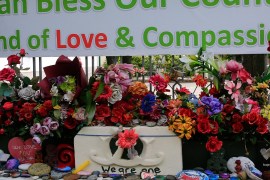 Commission was due to submit findings this week, but wants time to consider issues such as racism and discrimination.