Libya’s UN-recognised government announced a ceasefire across the country on Friday and called for demilitarising the contested strategic city of Sirte, raising hopes for peace in the more than nine-year-old conflict.

The Tripoli-based Government of National Accord (GNA) also called for parliamentary and presidential elections to be held in March, and for an end to an oil blockade imposed by rival forces since earlier this year.

GNA head Fayez al-Sarraj “issued instructions to all military forces to immediately cease fire and all combat operations in all Libyan territories”, a statement said.

Al-Sarraj added the ultimate aim of the truce is to impose “full sovereignty over the Libyan territory and the departure of foreign forces and mercenaries”.

Aguila Saleh, speaker of the rival eastern-based House of Representatives, said: “A ceasefire blocks the way for foreign military interventions and ends with the expulsion of mercenaries and dissolving the militias in order to achieve comprehensive national sovereignty”.

UN Secretary-General Antonio Guterres welcomeed the calls for a ceasefire. hoping they “will be respected immediately by armed forces from both sides”, UN spokesman Stephane Dujarric said.

The European Union also welcomed the announcement, with its High Representative Josep Borrell saying it was “positive news coming from Libya” before adding that it was “crucial now that all parties stand by their statements”.

Aguila Saleh, speaker of the pro-Haftar Libyan parliament, called on all parties to adhere to the truce. Saleh said the ceasefire will prevent foreign military intervention in Libya.

The truce will make the strategic city of Sirte a temporary seat for a new presidential council to be guarded by security forces from various regions in the country, said Saleh.

Egypt’s President Abdel Fattah el-Sisi – who has backed Haftar and threatened to deploy troops across the border into Libya – welcomed the ceasefire declarations, a statement said.

As did the UN Support Mission in Libya, which called for the expulsion of all foreign forces and mercenaries in Libya. Both sides of the conflict are supported by thousands of mercenaries.

Sami Hamdi, editor-in-chief of The International Interest, a current affairs analysis magazine, said the announcements raised the prospect of peace in the North African nation after a number of failed ceasefires.

“I think this is the first time in the entire Libyan conflict whereby we have military stalemate, the military dynamics are equal,” Hamdi told Al Jazeera. “This time as a result of Turkish intervention, the western side, the GNA … has enough power to prevent Haftar from marching westwards.

“This ceasefire has a very good chance of lasting because the cost of a potential battle is so high and if an individual faction decides to launch a battle by itself it would find itself obliterated,” he added.

“Now, we are seeing a new phase in the negotiations between Turkey and the other foreign powers. All the dynamics suggest that all the foreign powers prefer some sort of peace at least for the foreseeable future.”

Libya was plunged into chaos when a NATO-backed uprising in 2011 toppled longtime ruler Muammar Gaddafi, who was later killed. The country has since split between rival east and west-based administrations, each backed by armed groups and foreign governments.

Haftar launched an offensive in April 2019 trying to capture the capital, Tripoli.

But his campaign collapsed in June when the Tripoli-allied fighters, with Turkish support, gained the upper hand, driving his forces from the outskirts of Tripoli and other western towns.

The GNA was founded in 2015 under a UN-led agreement, but efforts for a long-term political settlement failed after a series of military offensives by forces loyal to Haftar.

The chaos in the oil-rich country has worsened in recent months as foreign backers increasingly intervene, despite pledges to the contrary at a high-profile peace summit in Berlin earlier this year.

Haftar is supported by Egypt, the United Arab Emirates, and Russia. Turkey, a bitter rival of Egypt and the UAE in a broader regional struggle over political Islam, is the main patron of the Tripoli forces, which are also backed by the wealthy Gulf state of Qatar. 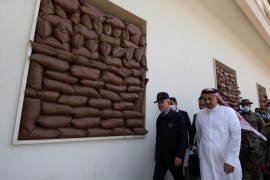 Turkish, Qatari and German ministers in Libya for talks with GNA 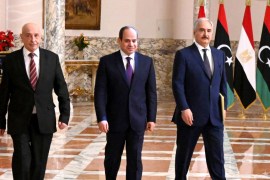 Egypt seeks support of Libya tribes amid threat of intervention

Cairo hopes alliances boost its legitimacy if it were to engage in battle against forces backed by Turkey. 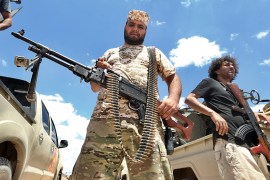 US Ambassador Norland discussed steps towards a complete withdrawal of foreign forces and mercenaries from Libya.