When fighters from a shadowy group, known as Ahlu Sunnah Wa-Jama (ASWJ) or “followers of the prophetic tradition”, began launching attacks in northern Mozambique in October 2017, security agencies dismissed it as isolated acts of banditry.

But the fighters continued attacking villages and towns in the resource-rich Cabo Delgado region, killing residents, burning houses and forcing thousands from their homes.

While not much is known about the fighters or ASWJ itself, some of the more recent assaults have been claimed by the ISIL-affiliated Islamic State Central Africa Province (ISCAP).

In April this year, police said 52 villagers in Cabo Delgado were killed when they refused to be recruited by the fighters, a major escalation that prompted authorities to admit for the first time the presence of ISIL-affiliated fighters in the country.

The National Council for Defence and Security, the body that advises President Filipe Nyusi on security matters, said in a statement it had “analysed the situation of the attacks in the province of Cabo Delgado and concluded that … they were committed by the Islamic State, a terrorist organisation”.

The council added that the country was dealing with “external aggression”. 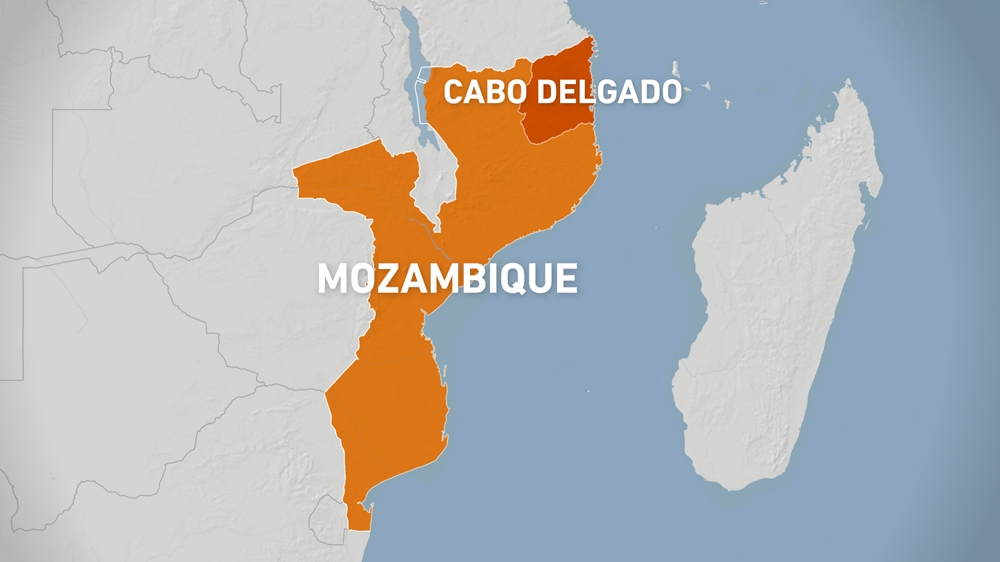 The group, known locally as al-Shabab, with no established links to the armed group in Somalia, has continued to launch attacks, briefly seizing key towns, barricading important roads and reportedly beheading residents and abducting girls.

Some displaced villagers have shared gory details and say they are too worried to even contemplate returning home soon.

“For several months, we couldn’t sleep well because these al-Shabab boys could strike anytime. They came mostly at night,” said Miguel Marcos, 57, who fled to the district headquarters in Pemba.

“We were left on our own. No government security came to our rescue, no help from anywhere. We lived in great fear until I decided to run away with my family,” Marcos told Al Jazeera.

Monitoring groups say at least 1,500 people have been killed and tens of thousands displaced since the fighting began.

“The increasing attacks by ASWJ in Cabo Delgado speaks both of the failure by the Mozambican government to counter the threat posed by the insurgency, in addition to the insurgents continuing to enhance their overall operational capabilities within Cabo Delgado province,” Ryan Cummings, a political and security risk analyst, told Al Jazeera.

“At this stage, it appears that the Mozambican government is ill-prepared to counter the threat,” he said.

Last week, the fighters scaled up their operations by attacking for the third time this year the town of Mocimboa da Praia and seizing its port.

The strategic port is used for cargo deliveries to the $60bn-worth gas projects located 60km (37 miles) further north that are being developed by oil giants such as France’s Total, Exxon Mobil Corp and other energy firms.

“The violence has raised concerns regarding investment in Cabo Delgado’s Liquified and Natural Gas sector, given that multinational companies have to increase both onsite and offsite security which will all impact the operational costs of their investment in the region,” Cummings said.

Insecurity in Mozambique’s gas-rich region was part of the agenda on Monday when Southern African regional leaders gathered for a virtual summit that saw Nyusi assume the chairmanship of the Southern African Development Community (SADC).

The regional bloc was expected to consider reported suggestions for deployment of foreign troops to assist Mozambican forces in Cabo Delgado.

“They should do whatever they can to help us and secure our region. We want peace to return,” Marcos said.

“We need immediate action from our leaders because these people [fighters] are so vicious in their attacks,” he added.

Analysts have pointed out that Mozambique’s army has historically been weak, and the country has reportedly employed the services of private security operators to support the battle against the fighters.

“Its engagement of private military contractors – such as Wagner and the Dyck Advisory Group – is not stemming the flow of violence or degrading insurgency capabilities,” Cummings said.

“SADC needs to mobilise both its diplomatic and security resources to ensure that the insurgency is contained in the near term, while looking at various mechanisms it could employ to ensure longer term solutions to socioeconomic grievances,” he said.

But in joint a statement, the leaders of the 16-member bloc expressed their “commitment to support Mozambique in addressing the terrorism and violent attacks” and praised Mozambique for its “continued efforts”.