Israel and the United Arab Emirates have reached an agreement – brokered by the United States – to work towards a “full normalisation of relations”, a deal the Palestinians called a “treacherous stab in the back”.

Under the agreement announced by the US President Donald Trump on Thursday, Israel said it has agreed to “delay” the annexation of Palestinian lands in the occupied West Bank, but the plan “remains on table”.

The UAE is the first Gulf Arab state and the third Arab nation – after Egypt and Jordan – to announce active ties with Israel.

The surprise deal was the product of lengthy discussions between Israel, the UAE and the US that accelerated recently, the White House said.

A joint Israel-UAE statement was also tweeted out by Trump, who called the deal a “huge breakthrough”.

“This historic diplomatic breakthrough will advance peace in the Middle East region and is a testament to the bold diplomacy and vision of the three leaders and the courage of the United Arab Emirates and Israel to chart a new path that will unlock the great potential in the region,” said the joint statement.

Delegations from Israel and the UAE would meet in coming weeks to sign bilateral agreements on investment, tourism, direct flights, security, telecommunications and other issues, the statement said. 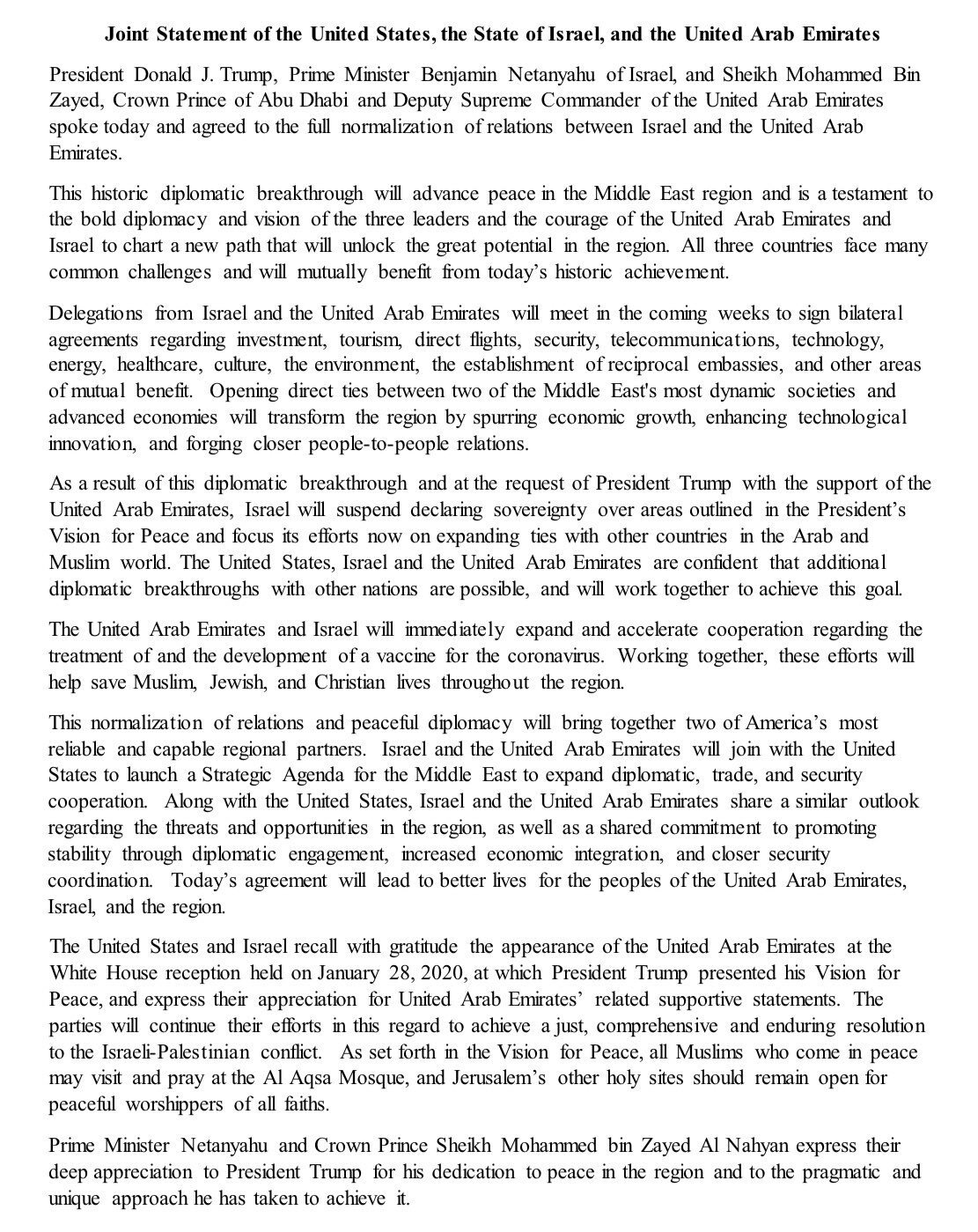 Speaking to reporters in the White House, Trump said he hoped other Muslim nations in the region will follow the UAE.

“Now that the ice has been broken, I expect more Arab and Muslim countries will follow the United Arab Emirates,” he said.

Netanyahu said it was a “historic day” in response to Trump’s tweets about the normalisation deal.

In a news conference later, he said he agreed to delay the annexation in the occupied West Bank as part the deal, but he would “never give up our rights to our land”.

Hamas condemned the deal, which it said was a “treacherous stab in the back”.

The Fatah movement said the UAE is “flouting its national, religious and humanitarian duties” toward the Palestinian cause.

Hanan Ashrawi, a member of the Palestinian Liberation Organization’s (PLO) executive committee, said the UAE has “come out in the open on its secret dealings” with Israel.

“Israel got rewarded for not declaring openly what it’s been doing to Palestine illegally and persistently since the beginning of the occupation,” she posted on Twitter.

May you never experience the agony of having your country stolen; may you never feel the pain of living in captivity under occupation; may you never witness the demolition of your home or murder of your loved ones. May you never be sold out by your "friends." https://t.co/CBaNl1QQqx

Reporting from West Jerusalem, Al Jazeera’s Harry Fawcett called the deal “a huge development” and something that Netanyahu had been “working towards for much of his political career”.

“The idea has been to normalise relations between Israel and its important Arab Muslim neighbours in the region and this is the first such agreement in full,” he said.

“Under the Arab initiative, there should be first a settling of the Arab-Israeli conflict before any normalisation, so this is a major upset in terms of what has been the explicit thinking of Arab politics up until this point.”

Al Jazeera’s senior political analyst Marwan Bishara said the Israel-UAE is not about “peace in the Middle East”.