Joe Biden, the presumptive Democratic presidential candidate, picked Senator Kamala Harris as his choice for vice president, making her the first Black woman and the first Asian American to compete on a major party’s presidential ticket in the United States.

The announcement on Tuesday capped a months-long search for a Democratic partner to challenge President Donald Trump in November.

Biden on Twitter called Harris “a fearless fighter for the little guy, and one of the country’s finest public servants”.

“Together, with you, we’re going to beat Trump,” he said.

I have the great honor to announce that I’ve picked @KamalaHarris — a fearless fighter for the little guy, and one of the country’s finest public servants — as my running mate.

Harris, who ran for the 2020 Democratic presidential nomination against Biden, said she was “honored” to join the ticket and would “do what it takes” to help him win.

Biden could “unify the American people because he’s spent his life fighting for us”, she wrote on Twitter

.@JoeBiden can unify the American people because he's spent his life fighting for us. And as president, he'll build an America that lives up to our ideals.

I'm honored to join him as our party's nominee for Vice President, and do what it takes to make him our Commander-in-Chief.

Biden’s campaign said he and Harris would make their first joint appearance on Wednesday in Wilmington, Delaware, where Biden lives and has spent most of his time in recent months limiting campaign travel because of the coronavirus pandemic.

In choosing Harris, a 55-year-old first-term senator from California, Biden is acknowledging the vital role Black voters will play in his bid to defeat Trump. Four years ago, the first dip in Black voter turnout in 20 years contributed to Democrat Hillary Clinton’s upset loss to Trump.

Biden, whose foundering campaign was rescued by Black voters in South Carolina’s primary in February, needs their strong support against Trump. Black voters will be crucial in battleground states, such as Michigan, Pennsylvania and Wisconsin, where Trump narrowly prevailed in 2016, as well as Republican-leaning southern states like Georgia and Florida that polls show have become competitive this year.

Biden had also been under increasing pressure to select a Black woman as his running mate amid social unrest over racial injustice and police brutality following the May 25 killing of George Floyd, a Black man, by a white policeman in Minneapolis.

Numerous Black leaders, including politicians who had themselves been considered as Biden’s running mate, emphasised the historic import of Harris’ selection.

“To see a Black woman nominated for the first time reaffirms my faith that in America, there is a place for every person to succeed no matter who they are or where they come from,” said US Representative Val Demings, a Black woman who had been a contender.

Former President Barack Obama praised Harris on Twitter: “She is more than prepared for the job. She’s spent her career defending our Constitution and fighting for folks who need a fair shake.”

Biden served as vice president for eight years under Obama, the first Black US president.

I’ve known Senator @KamalaHarris for a long time. She is more than prepared for the job. She’s spent her career defending our Constitution and fighting for folks who need a fair shake. This is a good day for our country. Now let’s go win this thing. pic.twitter.com/duJhFhWp6g

Meanwhile, Clinton, the 2016 Democratic presidential candidate, called Harris “an incredible public servant and leader” and said she would be “a strong partner” for Biden.

I'm thrilled to welcome @KamalaHarris to a historic Democratic ticket. She's already proven herself to be an incredible public servant and leader. And I know she’ll be a strong partner to @JoeBiden. Please join me in having her back and getting her elected. pic.twitter.com/cmtOO8Gqqv

“This is as significant as the Barack Obama moment,” she told Al Jazeera from Washington, DC. “I’m a Black woman in her 40s, and I’ve never had the opportunity to vote for a Black woman for an office of this type. You can still count the number of Black people who’ve been senators, governors on one hand … this shows how far we have to go as a country.”

Harris was “not just a descriptive representative”, said Carter. “She is a formidable campaigner. She has won state-wide elections multiple times in the state of California, which while very diverse does not have a large Black population. So, you’re looking at someone who knows how to win elections.”

The Biden campaign notched its best grassroots fundraising day following the announcement, according to one of its digital directors, Clarke Humphrey.

Republicans immediately tried to portray Harris as a “radical” who embraces far-left priorities such as sweeping police reform and a ban on fracking.

During a White House briefing on Tuesday, Trump called Harris “the meanest, the most horrible, most disrespectful” and “most liberal” senator and said she was his “No. 1 draft pick” given her unsuccessful presidential campaign.

Harris joins Biden in the 2020 race at a moment of unprecedented national crisis. The coronavirus pandemic has claimed the lives of more than 160,000 people in the US, far more than the toll experienced in other countries. Business closures and disruptions resulting from the pandemic have caused severe economic problems.

Trump’s uneven handling of the crisis has given Biden an opening, and he enters the campaign’s final stretch in a strong position against the president. In adding Harris to the ticket, he can point to her relatively centrist record on issues such as healthcare and her background in law enforcement in California, the country’s largest state.

But Harris’s record as California attorney general and district attorney in San Francisco, which was heavily scrutinised during the Democratic primary, turned away some liberals and younger Black voters who saw her as out of step on issues of racism in the legal system and police brutality.

Critics said she did not do enough to investigate police shootings and too often sided with prosecutors in wrongful conviction cases. But her defenders said she has always been reform-minded – and point to her record in the Senate, where she has championed a police-reform bill and an anti-lynching bill, among other measures.

In the aftermath of Floyd’s killing, she co-sponsored legislation in June that would ban police from using chokeholds and no-knock warrants, set a national use-of-force standard and create a national police misconduct registry, among other things. It would also reform the qualified immunity system that shields officers from liability.

Harris is also known for her sometimes aggressive questioning style in the Senate, most notably of Brett Kavanaugh during his 2018 Supreme Court confirmation hearing.

As a presidential candidate, she also took Biden to task in a nationally televised debate over his past stances on mandatory busing for students as a means to desegregate schools.

While that exchange failed to boost her White House hopes, the Biden campaign will now look for her to train her fire on Trump and Vice President Mike Pence. Harris is scheduled to debate Pence on October 7 in Salt Lake City, Utah.

The choice of a running mate has added significance for Biden, 77, who would be the oldest person to become president if he is elected. His age has led to speculation he will serve only one term, making Harris a potential top contender for the nomination in 2024. 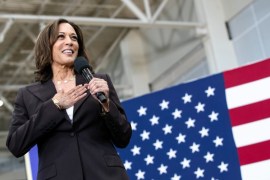 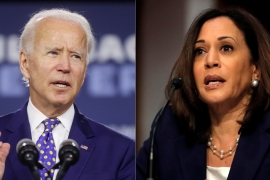 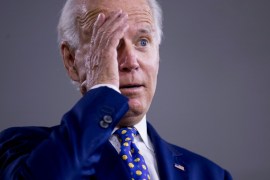 Biden vowed to select a woman and is expected to announce his VP this week ahead of the Democratic National Convention. 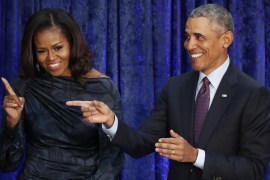 Biden: I would pick Michelle Obama as VP ‘in a heartbeat’

While many Democrats have fantasised about the prospect, the former first lady has said she has no interest in the role.