India’s southwesterly monsoon has lashed the western parts of the country with heavy and persistent rain, causing widespread disruption and leaving roads and buildings flooded.

People were seen wading through knee-deep waters while motorists had to take extra care on their journeys.

Until Sunday morning, the Santacruz neighbourhood in Mumbai had received a staggering 427mm of rain in 24 hours. It was 133mm in the previous 24 hours.

July is the city’s wettest month with an average rainfall of 819mm. The first five days of the new month has already seen 675mm of rain.

The wet weather is expected to move out of Maharashtra state into southern and central Gujarat over the next few days.

However, the India Meteorological Department said more heavy rain is likely across Mumbai and the surrounding areas for much of the week ahead.

Warnings have also been issued advising people to stay away from the coast.

Annual rainfall is essential in India as rains support two-thirds of the 1.3 billion population living in rural areas who rely on farming.

But excessive rainfalls often cause floods, landslides and waterborne diseases. 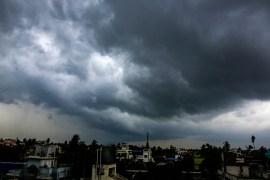 Some 83 people killed in the state of Bihar after being struck by lightning, and another 24 died in Uttar Pradesh state. 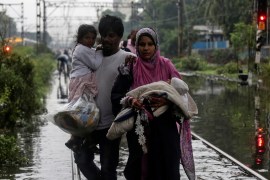 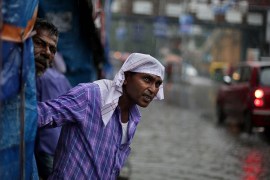 Heavy downpours bring disruption to a number of cities throughout India.