The United Kingdom suspended its extradition treaty and blocked arms sales with Hong Kong on Monday after China imposed a tough new national security law and was accused of forcibly sterilising ethnic minority women in Xinjiang.

As tensions grow with Beijing, Foreign Secretary Dominic Raab said he had concerns about the new law and alleged human rights abuses in China, particularly the treatment of the Muslim Uighur minority. He described the measures as “reasonable and proportionate”.

“We will protect our vital interests,” Raab said. “We will stand up for our values and we will hold China to its international obligations.”

The UK followed the example of the United States, Australia and Canada by suspending extradition arrangements with the semi-autonomous Chinese territory.

The ban is another nail in the coffin of what then-prime minister David Cameron in 2015 cast as a “golden era” of ties with China, the world’s second-largest economy.

London has been dismayed by a crackdown in Hong Kong, which returned to Chinese rule in 1997 from British rule, and the perception that China did not tell the whole truth over the coronavirus outbreak.

“The first is to offer refuge to up to three million Hong Kong citizens to come live and work in the UK,” Barker said, speaking from London.

“The second is to extend an arms embargo to mainland China – which has been in place since the late 1980s – to Hong Kong and that includes equipment that Raab said could be used for ‘acts of internal repression’ – which seems to be a veiled criticism of police tactics in Hong Kong against demonstrators.

“The third is to end a 30-year extradition agreement between the UK and Hong Kong, which will be effective immediately.”

The arms embargo extends a measure in place for China since 1989. It means Britain will allow no exports of potentially lethal weapons, their components or ammunition, as well as equipment that might be used for internal repression such as shackles, firearms and smoke grenades.

The review of the extradition measures comes only days after Britain backtracked on plans to give Chinese telecommunications company Huawei a role in the UK’s new high-speed mobile phone network amid security concerns fuelled by rising tensions between Beijing and Western powers.

The UK accused Beijing of a serious breach of the Sino-British Joint Declaration – under which the UK returned control of Hong Kong to China in 1997 – and announced it would open a special route to citizenship for up to three million eligible residents of the community.

But Johnson said on Monday he would not “completely abandon our policy of engagement” with Beijing.

The UK leader said he will not be “pushed into a position of becoming a knee-jerk Sinophobe on every issue, somebody who is automatically anti-China”.

“China is a giant factor of geopolitics, it’s going to be a giant factor in our lives and in the lives of our children and grandchildren. You have got to have a calibrated response and we are going to be tough on some things, but also going to continue to engage,” said Johnson.

China’s ambassador to Britain, Liu Xiaoming, told the BBC on Sunday that Britain was “dancing to the tune” of the United States and rejected the allegations of human rights abuses against the mainly Muslim Uighur people. 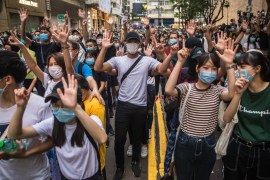 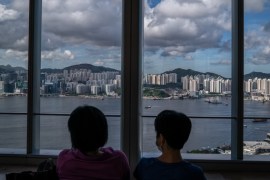 Could the United States break Hong Kong’s peg to the dollar?