The development follows a series of military victories of Libya’s UN-recognised Government of National Accord (GNA) against Haftar’s forces.

“This initiative calls for respecting all international efforts and initiatives by declaring a ceasefire from 6pm [16:00 GMT] Monday, June 8, 2020,” President Abdel Fattah el-Sisi told a news conference on Saturday.

He was speaking alongside Haftar and his ally, eastern parliament speaker Aguila Saleh.

El-Sisi urged international support for the initiative and called on the United Nations to invite Libya’s rival administrations for talks.

The initiative, called the “Cairo declaration”, urged the withdrawal of “foreign mercenaries from all Libyan territory”, he said.

El-Sisi added that the declaration also called for “dismantling militias and handing over their weaponry so that Libyan National Army [led by Haftar] would be able to carry out its military and security responsibilities and duties”.

The Egyptian president also said the initiative paves the way for forming an elected presidential council in Libya.

He added that it prevents “extremist militias” from gaining control over the country’s resources.

Later on Saturday, Russia announced its support for the ceasefire announced in Egypt

“We read the content of the Egyptian President’s offer, of course, we support all kinds of offers to stop the conflicts in Libya as soon as possible,” said Mikhail Bogdanov, the special representative of Russia to the Middle East and African countries, according to the Ria News Agency.

Meanwhile, forces loyal to Libya’s UN-recognised government said they launched an offensive on Saturday to seize the strategic city of Sirte.

“The air force has carried out five strikes in the outskirts of Sirte,” slain dictator Moamer Kadhafi’s hometown and the last major settlement before the traditional boundary between Libya’s west and east, GNA spokesman Mohamad Gnounou said.

“Orders have been given to our forces to begin their advance and to systematically attack all rebel positions,” he added.

Sirte was taken by Haftar’s forces virtually without a fight in January after one of Libya’s myriad local fighters switched sides.

Libya plunged into chaos in 2011 when an uprising toppled and later killed longtime leader Muammar Gaddafi.

It is split between two rival administrations in the east and the west, each backed by opposing fighters struggling for power.

Haftar has since last year sought to regain control over the west, fighting the GNA in an abortive attempt to seize the capital Tripoli.

His LNA forces have in recent weeks lost crucial ground to GNA forces, which are backed by Turkey.

Haftar is supported by Egypt and the United Arab Emirates as well as Russia. 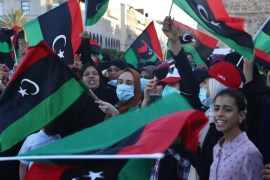 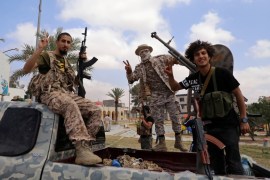