Forces loyal to Libya’s internationally recognised government said on Friday they entered Tarhuna, the last major stronghold of renegade military commander Khalifa Haftar in the west, capping the sudden collapse of his 14-month offensive on the capital.

Haftar’s self-style Libyan National Army (LNA) was pushed from its last positions in Tripoli a day earlier, the latest of in a series of battlefield defeats.

Al Jazeera’s Mahmoud Abdelwahed – reporting from Tarhuna, 75km (47 miles) east of Tripoli – said the city’s loss was a major blow to the LNA as Tarhuna was the main launchpad for the offensive against the capital.

Government forces now may target the Haftar-controlled city of Bani Walid to the south, said Abdelwahed.

Turkey’s backing has helped the internationally recognised Government of National Accord (GNA) win a string of victories in recent weeks, ending the assault on Tripoli that led to battles in its southern suburbs and the bombardment of the city centre.

The GNA operations room said its forces had reached the centre of Tarhuna after entering from four sides.

“Our heroic forces entered the city of Tarhuna from four axes and reached the city centre … and they gave the Haftar terrorist militia a lesson they will not forget,” said Mohammed Gnounou, a GNA military spokesman, in a statement.

Mostafa al-Majai, another GNA military spokesman, said government forces entered Tarhuna without a fight after the LNA pulled out of the city into the desert.

“No reprisal acts have taken place inside the city. A large number of residents left it days ago. This has made it easy to establish security there,” he said.

Libya’s conflict is far from over, however, with the LNA still controlling the country’s east, where there is a parallel administration, and large parts of the south, where the main oilfields are located.

The LNA is backed by Russia, the United Arab Emirates (UAE), and Egypt. The United Nations has warned a recent flood of weapons and fighters to both sides in Libya risks a major new escalation.

GNA Prime Minister Fayez al-Sarraj vowed his government would take control over all of Libya.

“Our fight continues and we are determined to defeat the enemy, impose state control on the whole of the homeland and destroy all those who jeopardise the construction of a civil, democratic and modern state,” al-Sarraj said after talks with Turkish officials in Ankara. 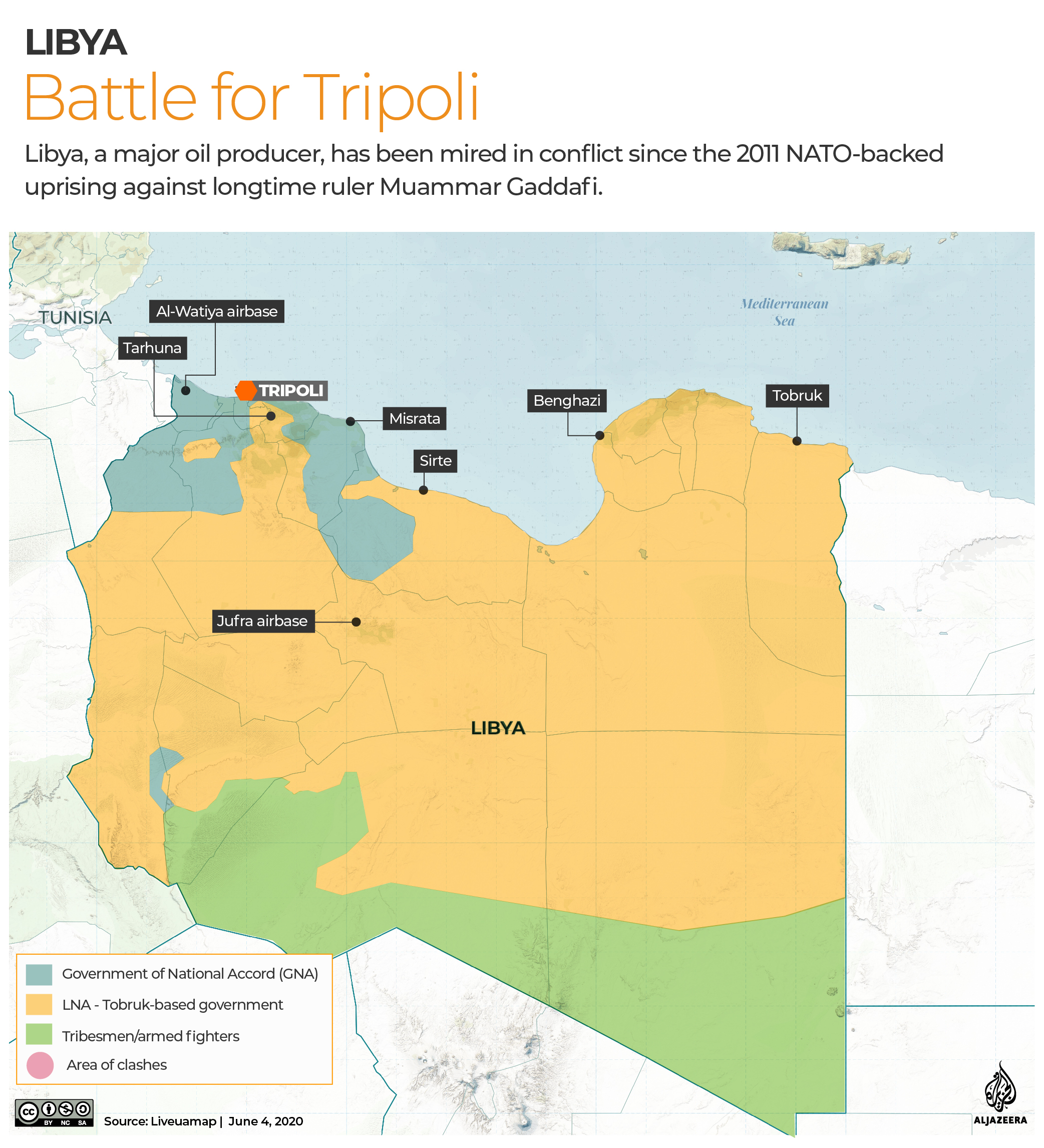 Sami Hamdi, The International Interest’s editor-in-chief, told Al Jazeera the Tarhuna’s fall may have been “a negotiated exchange between the Russians and the Turks”.

“In terms of its significance, it means the complete end of Haftar’s Tripoli offensive. The military solution that Haftar offered … is no longer on the table, and we are back to the status quo as it was before the beginning of the Tripoli offensive, east and west,” Hamdi said.

Meanwhile, Haftar’s forces confirmed their “redeployment” away from the capital following the UN-recognised government’s announcement on Thursday it was back in full control of the Greater Tripoli areas.

Hundreds of people have been killed and 200,000 more driven from their homes since Haftar launched his assault, pledging to “cleanse” the capital of the “terrorist militias” he said dominated the GNA.

Al-Mesmari said the redeployment was also intended to bolster the work of a UN-backed military commission tasked with shoring up a nationwide ceasefire.

“We announce that we are redeploying our forces outside Tripoli on condition that the other side respect the ceasefire,” he said in a statement released late on Thursday.

“If they do not respect it, we will resume military operations and suspend our participation in the negotiations of the military committee.”

Claudia Gazzini, a senior analyst with the International Crisis Group, said it was uncertain what Haftar’s next move will be but that it was unlikely for his foreign supporters to back a new offensive on Tripoli if the GNA stops at Tarhuna.

“We’ve registered over the past months increasing dissatisfaction from Haftar’s foreign backers about the conduct of the war and his own personal conduct. Egyptian and Emirati officials have been voicing this in private,” Gazzini told Al Jazeera.

“What they’re trying to do is avoid a counteroffensive if possible… But that also depends on what the GNA does, meaning if they stop their military offensive at Tarhuna and do not venture further east, then we could see a freezing of the conflict and ceasefire talks.”

“But if GNA forces and politicians call for a continued offensive toward Sirte, Jufra or even further east toward the oil terminals then at that point I think that Haftar’s foreign backers might recalculate again and go for a new counteroffensive.”

The UN’s Libya mission said on Tuesday that after a three-month suspension, the warring parties had agreed to resume ceasefire talks.

A military commission made up of five GNA loyalists and five Haftar delegates held talks in February, but the dialogue was suspended.

UN experts in April said hundreds of mercenaries from Russian paramilitary organisation the Wagner Group were fighting for Haftar.