Cyclone Nisarga, which intensified into a severe cyclonic storm in the Arabian Sea, is making landfall along India’s western coast, forcing a high alert in the financial hub of Mumbai and evacuation of tens of thousands of people.

“[The] landfall process started and it will be completed during the next three hours. The northeast sector of the eye of the severe cyclonic storm Nisarga is entering into the land,” India’s meteorological department said on Wednesday.

Nisarga dropped heavy rains and winds gusting up to 120km (75 miles) per hour as a category 4 cyclone near the coastal city of Alibagh, about 98km (60 miles) south of Mumbai, the capital of Maharashtra state and home to more than 18 million people.

At least 100,000 people, including coronavirus patients, were moved to safer locations, according to officials. The storm surge threatened to flood beaches and low-lying slums as city authorities struggle to contain the pandemic.

In Mumbai, the home of Bollywood and India’s largest stock exchange, high winds whipped skyscrapers and ripped apart shanty houses near the beach.

Reporting from New Delhi, Al Jazeera’s Elizabeth Puranam said there are many dwellings along the coastal areas which are not structurally sound to withstand the storm.

“We have seen many trees uprooted in parts of Maharashtra as India’s west coast, including the states of Goa and Gujrat, are hit by really strong winds and heavy rain and high tides even before Cyclone Nisarga made landfall,” she said.

Media reports said Nisarga is the worst cyclone to hit the region in more than 70 years, raising concerns about readiness in Mumbai and neighbouring areas.

The cyclone threatens to worsen prospects for an economic turnaround as a nine-week-long government-imposed coronavirus lockdown began to ease this week.

India’s largest container port, Jawaharlal Nehru Port Trust, on the outskirts of Mumbai, was ordered to shut for 24 hours, the port said in a statement.

The storm came as the Indian region grapples with the ongoing coronavirus pandemic.

Maharashtra and Gujarat states have reported about 44 percent of India’s more than 200,000 COVID-19 cases nationwide, and 61 percent of all virus deaths.

The metropolis of Mumbai is already struggling with the highest number of coronavirus cases with more than 41,000 infections.

Local news reports have shown an overwhelmed hospital system in Mumbai, with patients resting on hospital floors until beds become available and bodies left in wards.

Maharashtra Chief Minister, Uddhav Balasheb Thackeray, said some 150 coronavirus patients had been moved out of a hospital near the city’s beachfront.

Some 100,000 people were evacuated from low-lying areas in Maharashtra and neighboring Gujarat, according to the Press Trust of India news agency.

“If hospitals and clinics are damaged by the cyclone, the city won’t be able to cope with the large number of COVID-19 cases, and social distancing measures will become virtually impossible to follow,” Bidisha Pillai, chief executive of Save the Children in India, said in a statement.

Cyclones often skirt densely populated Mumbai, though every year during torrential rains of the June-September monsoon season roads are submerged, and the suburban railway service that serves millions of people comes to a halt.

But the city has rarely faced the brunt of cyclones – the last severe storm to hit the city struck in 1948, killing 12 people and injuring more than 100.

The NDRF has mobilised 32 teams, and a total of 1,500 men are ready in the two states to help with evacuations and relief.

Nisarga is the second cyclone to strike India in a little less than two weeks. On May 21, Cyclone Amphan battered the country’s eastern coast including Kolkata, and neighbouring Bangladesh, killing more than 100 people and leaving a trail of destruction.

Although post-monsoon flooding is common in Mumbai in the fall, some experts fear the city is not prepared for the strong winds and storm surges that come with the cyclone.

“There’s been no test of how the city does in a cyclone,” said Adam Sobel, a climate scientist at Columbia University who has studied the risk to Mumbai. “It just makes me nervous.” 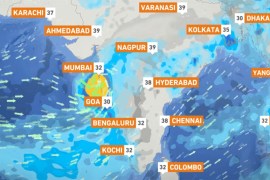 India braces for rains as another cyclone approaches west coast

Developing system threatens damaging winds and flooding rains along the northwest coasts of Maharashtra and Gujarat. 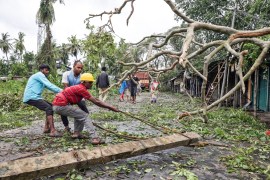 At least 88 killed, thousands of homes destroyed and millions remain without power as the cyclone batters the region.