Protests between Lebanese security forces and protesters against deteriorating economic and living conditions continued overnight on Friday, as Lebanese President Michel Aoun spoke of a plan to bolster the national currency.

Protesters threw stones and fireworks at police, and security forces responded with tear gas in an effort to disperse the crowd, which continued to grow into the late hours of Friday. Armoured vehicles were seen rolling onto the streets.

The Operations Room of the Lebanese Emergency and Relief Agency announced on Saturday morning at least 33 people – including two soldiers – were injured during clashes between the army and protesters.

In one incident in central Beirut, roughly 200 young men gathered on mopeds, some of them defacing shop fronts and setting fire to stores. Some chanted against sectarianism.

In the northern city of Tripoli, the army dispersed hundreds of protesters shouting “revolution, revolution”. Demonstrators had thrown stones and Molotov cocktails towards the soldiers and damaged the facades of several banks and shops. Soldiers responded with tear gas.

After a crisis meeting on Friday, President Aoun announced that the central bank would implement measures from Monday including “feeding dollars into the market”, in a bid to support the Lebanese pound.

No specific amount was given for the planned injection.

But 17-year-old Wael, protesting in Tripoli, was not impressed: “I just want a job so I can live. We don’t believe all the measures taken by the government to improve the dollar exchange rate.”

The country’s unemployment rate has soared to 35 percent.

Lebanese media reported that the exchange rate had tumbled to 6,000 per dollar on the black market early on Friday, compared to the official peg of 1,507 in place since 1997.

President Aoun blamed the currency plunge this week on “political manipulation,” intentionally aimed to create chaos to undermine the government he is allied with.

“What happened [on Thursday] as a result of the high price of the dollar without any justification, makes us wonder if the number given to the dollar price is a rumour that has been circulated to make people take to the streets and for confrontations take place,” he said. “Is it a political game or banking or something else?”

Aoun added that the huge losses in the financial system and the collapse of the lira against the dollar on Thursday, should be borne by the government, the central bank, and commercial banks, not depositors.

The local currency has lost nearly 70 percent of its value in weeks.

The Lebanese have for years used the dollar and the Lebanese pound interchangeably. So with the drop, employees saw their income and savings lose more than 60 percent in value in weeks.

Lebanon – one of the most indebted countries in the world with sovereign debt of more than 170 percent of its gross domestic product – went into default in March.

It started talks with the International Monetary Fund last month in a bid to unlock billions of dollars in financial aid. Dialogue is ongoing. 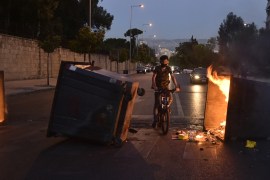 Hassan Diab’s government is facing growing calls to resign after the currency lost 25 percent of its value in two days. 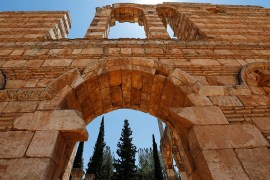 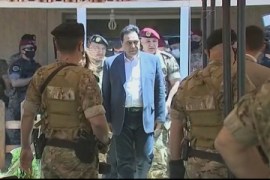 The government seeks to borrow billions of dollars but so far talks with the International Monetary Fund have made little progress.