Mexico’s capital registered 8,072 more deaths in the first five months this year than the average from the same period over the previous four years, an analysis by independent researchers showed on Monday, suggesting a possible surge in fatalities to the coronavirus pandemic.

Health officials have reported 1,655 deaths from the virus in Mexico City, out of 7,394 deaths nationwide. They have also acknowledged that the true death toll is higher, but difficult to estimate because of the low testing rate.

Software developer Mario Romero Zavala and economic consultant Laurianne Despeghel, whose analysis was published in Mexican magazine Nexos, counted 39,173 fatalities this year up to May 20 by extracting data from Mexico City’s online database of death certificates.

During the previous four years, they calculated just 31,101 deaths on average during the same period, using the same database.

Mexico City’s official count of deaths from the coronavirus represents just more than 20 percent of the study’s “excess mortality” – a term used by epidemiologists to estimate the increase in deaths, versus normal conditions, attributable to a public health crisis.

Excess mortality is difficult to calculate in Mexico because the most recent data on fatalities from the national statistics institute is from 2018.

Despeghel said the analysis was only a first step towards measuring the impact of the virus.

“While studying excess deaths allows us to identify a higher mortality rate during the COVID-19 crisis, it is not sufficient to attribute it directly or solely to the virus,” she said.

A Reuters review of data from 13 funeral homes in Mexico City showed that the excess mortality rate in the first week of May could be at least 2.5 times higher than the government’s tally of deaths from the coronavirus during that period.

Meanwhile, officials in a Mexican border city are tightening checks on travellers coming from Texas, saying they fear US visitors may be helping feed a spike in COVID-19 cases, The Associated Press news agency reported on Monday.

Municipal and state officials in Matamoros, together with Mexico’s National Guard began setting up checkpoints last Saturday at the three border crossings to question US citizens and residents coming from Brownsville, Texas.

City official Jorge Mora Solaldine said only one person would be allowed for each vehicle and people will have to prove they have essential business, such as work or medical care.

At least 180 people were turned back at a single point on Saturday, according to city officials.

Mexico and the US announced in March that they were closing the border to non-essential business, but enforcement has been spotty in some places, and there were few, if any, checks on those coming into Matamoros.

Commercial traffic, critical to the economy on both sides of the border, has continued on a large scale.

The municipality of Matamoros, with a population of roughly 500,000, has reported 323 confirmed infections of the new coronavirus and 29 deaths, while Cameron County on the other side of the border has recorded about 700 cases and 32 deaths among its roughly 420,000 people.

The US-Mexico border is the busiest in the world, with many people normally crossing almost daily for work or school.

Residents and officials on both sides have claimed that travellers from across the border were bringing the infection. 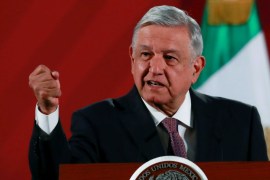 More than 38,000 people have been infected with COVID-19 in Mexico, but health experts warn the number is much higher. 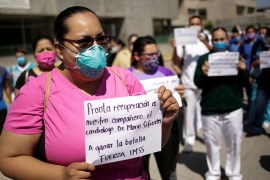 ‘No one’s looking out for us’: Mexico medical workers beg for PPE

As Mexico prepares for the peak of the pandemic in May, health workers say PPE shortage is fuelling hospital outbreaks. 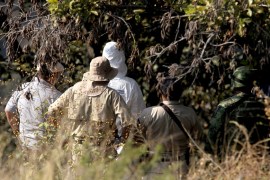 Remains of at least 25 bodies found in Mexico mass grave