“Our heroic forces have entered the towns of Bader and Tiji amid welcome from their residents,” the media office of the Burkan Al-Ghadab (Volcano of Rage) Operation, the government-led counteroffensive launched last April, said in a statement on Facebook on Tuesday.

On Monday, forces allied to the GNA retook the strategic al-Watiya airbase south of the capital, Tripoli. The base had been under Haftar’s control since 2014.

Analysts say losing the base, one of the main strongholds for Haftar’s forces in western Libya, is a significant blow to Haftar’s year-long campaign to seize the capital from the GNA.

After losing control of the base, Ahmed al-Mesmari, the spokesperson for Haftar’s Libyan National Army (LNA) said on Tuesday Libya’s eastern-based forces had withdrawn from some embattled areas of the capital Tripoli. 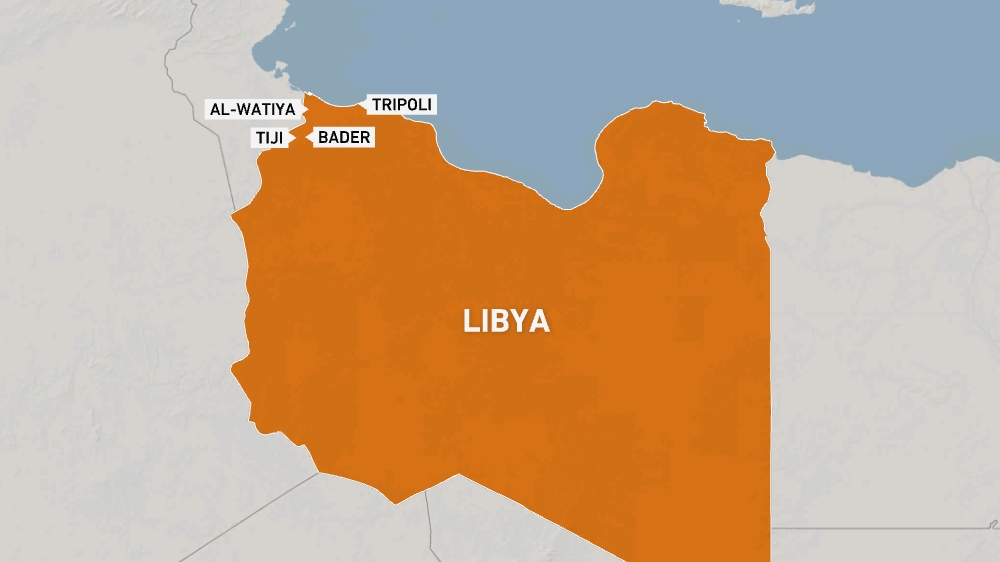 However, al-Mesmari said in the televised speech that the base had been abandoned as part of a long-planned strategic decision and that only old, obsolete equipment was left there.

He said the forces had carried out a “redistribution and repositioning in the battlefronts, disengaging from some crowded residential areas”.

“This move was not made in the spur of the [moment]; it was planned for months. We’ve been pulling out strategical equipment and heavy military gear from the base,” al-Mesmari said.

“Only yesterday orders were given from personnel to withdraw under our air cover. The withdrawal was successful, and we’ve moved the personnel and all the weaponry and ammunition.

“We have our own plans and we will recapture the airbase.”

GNA forces retook the al-Watiya airbase after weeks of attempts, their biggest advance in a year that deprives the LNA of its only airfield near Tripoli.

After taking the base, they paraded what they said was a Russian-made Pantsir air defence system mounted on a truck, along with an Arabic manual.

GNA Minister of Interior Fathi Bashagha said on Twitter that “Haftar’s chance of success is now effectively zero” following his loss of Watiya.

Haftar’s forces have been fighting for more than a year to capture Tripoli, the seat of the GNA, with more than 1,000 killed in the violence.

The GNA, recognised by the United Nations, has moved onto the front foot in the war since January with increased military help from Turkey. The LNA, under Haftar, is supported by the United Arab Emirates (UAE), Russia and Egypt.

Violence between the two sides has raged in recent weeks despite repeated international calls for a humanitarian truce in Libya to focus on the fight against the coronavirus.

Libya has been in turmoil since the NATO-backed overthrow of late ruler Muammar Gaddafi in 2011.

The UN imposed an arms embargo on Libya after Gaddafi’s removal, but it has been repeatedly violated.

Al Jazeera’s Mahmoud Abdelwahed reporting from Tripoli said the loss of the al-Watiya airbase for Haftar’s forces has changed the balance of power in other front lines namely in southern Tripoli.

“The spokesman of Haftar’s forces stated that they are repositioning, regrouping and this is interpreted as he’s paving the way for a kind of withdrawal,” Abdelwahed said.

After recapturing Tiji and Bader, government forces have since moved on to the town of Asabi’a, another Haftar stronghold, Abdelwahed said. Tarhuna now remains the only major stronghold for Haftar’s forces in western Libya.

“It’s clear that Haftar’s forces are losing momentum, especially [considering] the series of setbacks they suffered over the two months,” Abdelwahed said.

“They lost six strategic cities and towns along the western coast in mid-April, the strategic al-Watiya airbase on Monday, Tiji and Bader this morning in the western mountain. And Asabi’a has almost fallen to the government forces. The question now is whether or not Haftar’s forces will withdraw to the city of Tarhuna.”

He added that government forces say they will continue “defending Tripoli until they repel the attack by Haftar’s forces in southern Tripoli”.