Kuala Lumpur, Malaysia – The Parliament of Malaysia will sit for the first time on Monday, two months after a power grab led to a change in government and the emergence of a cluster of coronavirus cases forced the country into lockdown from which it is only now starting to emerge.

But there will be no government bills presented for scrutiny and no opportunity for the politicians suddenly flung into opposition to test the majority of Prime Minister Muhyiddin Yassin with a vote of no-confidence.

The only item on the agenda is the king’s speech, a roughly one-hour-long address on the government’s plans.

“It is a case of ‘tick a box’ so to speak,” constitutional lawyer Lim Wei Jiet told Al Jazeera, referring to a requirement that the parliament, which last sat in December, cannot be in recess for more than six months. “I think the real intention is to prevent the executive from being scrutinised by the legislature and avoiding its majority being tested.”

Muhyiddin was sworn in as prime minister on March 1 after a power grab within the then-governing Pakatan Harapan coalition triggered the resignation of his predecessor – and party co-founder – Mahathir Mohamad, the collapse of the coalition that had governed Malaysia since May 2018, and a week of political intrigue.

On announcing his decision to name Muhyiddin as prime minister, after meeting each member of Parliament individually, King Abdullah Ahmad Shah said he believed Muhyiddin had the numbers, even as Mahathir and Pakatan Harapan said they did. A parliamentary sitting scheduled for March was postponed.

Speaking to Malaysians on national television at the end of the month, 10 days after the country had gone into a coronavirus lockdown, the man who had been Pakatan’s home minister acknowledged the frustration felt by many voters at the sudden change in administration, and appealed for their support.

“This government may not be the government that you voted for,” Muhyiddin said, urging Malaysians to come together. “I want all of you to know that this government cares for you.”

In contrast to Pakatan Harapan, which included the multiracial but mostly ethnic Chinese Democratic Action Party and the multiracial Keadilan Rakyat, Perikatan Nasional is dominated by ethnic Malay parties. While Malays, who are Muslim, make up the majority of Malaysia’s population, about 44 percent of Malaysians are of other ethnicities.

Muhyiddin’s own Parti Pribumi Bersatu Malaysia (Bersatu) is split, with 94-year-old Mahathir who has been Malaysia’s prime minister for 25 of the past 39 years remaining the chairman of the party and still backing Pakatan. He is thought to have about five of the party’s members of Parliament on his side, compared with Muhyiddin’s 31.

To hold onto his job, Muhyiddin is reliant on the backing of the United Malays National Organisation (UMNO), which was rejected by voters in the last election amid massive corruption, and Parti Islam SeMalaysia (PAS), whose goal is to turn Malaysia into an Islamic state. UMNO has 39 members of Parliament.

“His position as prime minister is very much dependent on whether he can control his (own) party and prevent its [members of Parliament] from defecting to Mahathir and Pakatan Harapan,” said BowerGroup Asia director Asrul Hadi Abdullah Sani. “Muhyiddin must formalise Perikatan. Otherwise, he will be a one-term [prime minister].”

The need to satisfy the different parties has led to a bumper-size Cabinet. Key party figures, including PAS leader Hadi Awang, have been made special envoys with ministerial status, and a slew of backbench members of Parliament appointed to chair government-linked companies and agencies.

But while Asrul believes Muhyiddin can be confident of the support of UMNO and PAS, others are not so sure.

“It’s a coalition of convenience,” said political analyst Oh Ei Sun, adding that UMNO could abandon Muhyiddin once he is seen to have outlived his usefulness.

UMNO, which dominated Malaysian politics until May 2018, has continued to prevaricate, suggesting Perikatan is more of a pact than a formal coalition. Some of its senior leaders, including the current president and former deputy prime minister, Ahmad Zahid Hamidi, and former Prime Minister Najib Razak, are on trial on corruption charges totalling hundreds of millions of dollars – in Najib’s case in relation to state fund 1MDB.

Amid the machinations, Francis Hutchinson, the coordinator of the Malaysian Studies Programme at ISEAS-Yusof Ishak Institute in Singapore, estimates Perikatan can count on 107 members of Parliament. In a commentary published with research associate Kevin Zhang on May 14, Hutchinson said with the backing of a handful of non-aligned MPs the grouping could manage a “narrow and unstable majority”.

While the government insists the decision to hold a single, ceremonial sitting is because of the current global pandemic, opposition members have questioned why the country cannot use video conferencing as other countries, including the United Kingdom, have done.

Yeo Bee Yin, who was minister of energy, science, technology, environment and climate change until March, said in a tweet on Saturday the government should not use the coronavirus as an “excuse” to limit sittings.

“Parliament debate & vote can be done virtually,” she wrote. “Many countries have done.”

Her successor, Khairy Jamaluddin, responded in a blog post that while the UK had tended to be a “reference point” for Malaysia’s parliament, the dates for Parliament had already been set for the year and there would be 61 days for majorities to be tested. He added that a virtual sitting would require amendments to the standing orders.

“I would urge the Speaker to call for the Standing Orders Committee to consider the amendments needed,” he wrote.

Others point out that the unprecedented nature of the pandemic, which has left many of the poorest struggling to make ends meet, demands Parliament’s involvement.

The country’s economy grew 0.7 percent in the first three months of the year with the central bank governor warning the pandemic had “created an unprecedented economic crisis”.

The government has so far announced wage subsidies, loan extensions and the early release of retirement savings worth billions of ringgit to help people through the difficult months ahead, but analysts say Parliament has a crucial role to play in considering and fine-tuning such plans.

“My reading of the constitution is that these (financial) packages need to be brought to parliament,” said Lim, the constitutional lawyer. “That process has not taken place. It appears the government is implementing policy by decree.”

Analysts argue even with the ceremonial session, there remains an opportunity for the opposition to make its concerns felt. They could attempt to amend the daily agenda, or stage a walk-out.

“It would ultimately be an exercise in political futility, but it would show their concerns,” said Oh.

By the time Parliament is next due to sit on July 18, the coronavirus threat will probably have receded – Malaysia has already eased its lockdown to allow people to return to work providing they meet social distancing guidelines – but that is unlikely to ease the pressure on Perikatan.

“As the COVID-19 situation dies down and the PN government is called into action – to actually govern and revive the economy, more disputes are likely to arise, which would likely increase its instability,” said Elvin Ong, a political researcher, based in Singapore.

Mahathir and Anwar will also have space to ponder their next move.

“The delay only lends weight to Dr Mahathir’s charge that the Perikatan Nasional administration is illegitimate,” Hutchinson and Zhang of ISEAS-Yusof Ishak said. “When coupled with the internal unrest within the ruling coalition over the allocation of ministerial portfolios, UMNO’s refusal to commit to a formal partnership with PPBM, and the deepening economic malaise in the country, the persistent doubts about the legitimacy of Muhyiddin Yassin’s mandate will only intensify.”

Parliament may only sit for a few hours on Monday, but Malaysia’s political machinations look set to rumble on for some time to come. 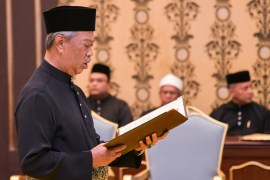 Muhyiddin emerges as prime minister after infighting between parties in the ruling coalition triggered its collapse. 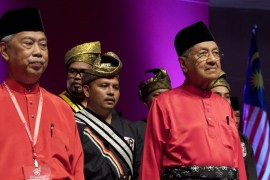 Mahathir gives up on confidence vote against new Malaysia PM

Veteran politician says he no longer believes his coalition has the numbers to carry the vote in parliament.