A two-week ceasefire declared by the Saudi-UAE coalition fighting Yemen’s Houthi rebels came into effect on Thursday, but the armed group says it would will not abide unless a years-long siege on the impoverished nation is lifted.

The announcement came days after the United Nations called for a halt in fighting amid the coronavirus pandemic.

SPA said the ceasefire was intended to help prevent a coronavirus outbreak in Yemen, while also allowing for a de-escalation in the fighting. It was also aimed at giving the Houthis an opportunity to join UN-sponsored talks on a settlement to the five-year conflict that has killed tens of thousands of people.

“We will continue to fight and target their military installations and industrial sites since they continue with the siege. So we don’t consider it to be a ceasefire,” he said.

“There has to be total end of the siege or else the war will continue.”

The conflict, widely seen in the region as a proxy war between Saudi Arabia and Iran, has been in a military deadlock for years.

Riyadh last year took over most of the costly and unpopular campaign after key coalition partner the United Arab Emirates (UAE) significantly scaled down its presence.

Earlier, Mohammed Abdulsalam, spokesman of the Houthi movement, said the group sent to the UN a comprehensive plan to end the war.

“[Our proposal] will lay the foundations for a political dialogue and a transitional period,” Abdulsalam said in a Twitter post on Wednesday.

Last week, UN special envoy Martin Griffiths sent a proposal to the internationally-recognised government, the Saudi-UAE military coalition that supports it, and the Houthi movement that controls the capital, Sanaa, and most of northern Yemen.

The proposal called for a nationwide ceasefire, including halting all air, ground and naval hostilities, and for the parties to ensure compliance by forces on the front lines.

The UN and Western allies have been pointing to the threat of coronavirus to push Yemen’s combatants to agree to new talks to end a war that has left millions vulnerable to disease.

Yemen has been mired in conflict since the Houthis toppled the government from power in Sanaa in late 2014.

The conflict has killed more than 100,000 people and unleashed an urgent humanitarian crisis that has pushed millions to the verge of famine and forced thousands to seek shelter in displacement camps.

“We are tired of the war “… We want it to stop for good,” said Abd al-Basset Muhammad, 49, who owns a juice shop in the southern port of Aden, interim headquarters of the Saudi-backed government.

“If the war hasn’t already killed you, you are dying of hunger or disease.”

University student Amal Abd al-Rahman, 24, said Yemenis had suffered enough. “We want to live to learn. If coronavirus appears, Yemen will be facing an unprecedented catastrophe.” 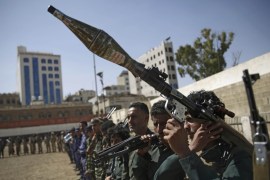 After five years of war in Yemen, battles continue to rage 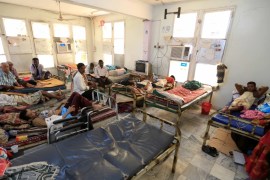