Iran has no proxies but it has friends, Iranian Foreign Minister Mohammad Javad Zarif said, a day after US President Donald Trump alleged Tehran or its “proxies” planned a sneak attack on US targets in Iraq.

“Don’t be misled by usual warmongers, AGAIN, @realDonaldTrump: Iran has FRIENDS: No one can have MILLIONS of proxies. Unlike the US – which surreptitiously lies, cheats & assassinates – Iran only acts in self-defence,” tweeted Zarif on Thursday.

“Iran starts no wars, but teaches lessons to those who do.”

Iran has FRIENDS: No one can have MILLIONS of"proxies"

Unlike the US—which surreptitiously lies, cheats & assassinates—Iran only acts in self-defense. Openly

Iran starts no wars, but teaches lessons to those who do

Trump said in a tweet on Wednesday that Iran is planning a “sneak attack” on US troops or “assets” in Iraq, warning the country will pay a “heavy price” if this happens.

The president made the abrupt announcement amid lingering tensions between the two countries over past confrontations, as well as the coronavirus pandemic.

Upon information and belief, Iran or its proxies are planning a sneak attack on U.S. troops and/or assets in Iraq. If this happens, Iran will pay a very heavy price, indeed!

Trump’s tweet coincided with US officials saying intelligence suggested that Iran or its Iraq-based proxies were planning an attack on US personal in the country, reported the Wall Street Journal on Wednesday.

“We’ve been seeing something brewing and developing pretty seriously,” an unnamed US official told the Journal, adding that intelligence has mounted over a two-week period. “We expect something soon.”

The US official said he expected the potential attack to be more menacing than previous rocket attacks.

Another American official told Reuters news agency on condition of anonymity that intelligence about a potential Iran-backed attack in Iraq suggested it would likely be a deniable attack. The official did not disclose intelligence on the timing or precise locations of any attack.

Meanwhile, senior Democrats have advised Trump against attacking Iran without consulting Congress. In a letter on March 27, they called on the US president to discuss any potential military action overseas with lawmakers.

News reports suggest the US deployed Patriot air defence systems to an Iraqi military base as a precaution against attacks by Iran-backed armed groups. One of the Patriot batteries was reportedly deployed to the Ain al-Asad facility.

While the 2015 nuclear deal between Iran and world powers offered a period of detente, relations have deteriorated with Trump’s decision nearly two years ago to abandon that multilateral agreement and reimpose US sanctions that have crippled the Iranian economy.

Tensions worsened after a January 3 US drone attack in Iraq killed Qassem Soleimani, the head of Iran’s elite Quds Force, as well as Abu Mahdi al-Muhandis, who founded Iraq’s Shia Kataib Hezbollah militia after the 2003 US-led invasion of Iraq.

Iran retaliated with a rocket attack on Iraq’s Ain al-Asad base where US forces were stationed on January 8. No US troops were killed or faced immediate bodily injury, but more than 100 were later diagnosed with traumatic brain injury.

The US has blamed Iran-backed Kataib Hezbollah for a March 11 rocket attack that killed two American troops and a 26-year-old British soldier in Iraq and, a day later, carried out air raids against its fighters in Iraq.

Phillip Smyth, an analyst who tracks Shia militias at the Washington Institute for Near East Policy think-tank, said he believed Trump’s warning was prompted by the emergence of the League of the Revolutionaries, a group he said was formed to give Kataib Hezbollah deniability to attack US targets. 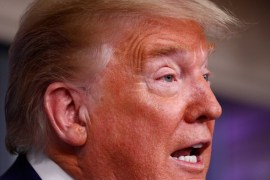 Trump, without offering details, warns against possible ‘sneak attack’ against US troops in Iraq. 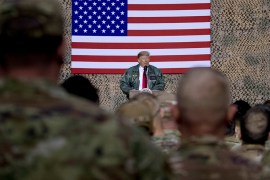 Iran warns US after Patriot missile deployment to Iraq