New York remains the epicentre for coronavirus cases in the United States with 10,834 deaths and over 200,000 reported cases as of April 14, but experts warn many other cities and states are quickly becoming hot spots for the outbreak.

While New York City sees a spike in deaths, major cities in the states of Louisiana, Illinois, Michigan and Florida have seen a surge in the number of cases. That’s in addition to cities and states on the West Coast that were first affected by the outbreak.

Here’s a look at some of the US hot spots outside of New York:

The home of the US automotive industry and one of the largest cities in Michigan, Detroit faced an economic downturn for years as auto production moved overseas.

The metropolitan area has a population of more than four million and a poverty rate of 35 percent, roughly three times the national average. Detroit also has a large homeless population, which officials say is particularly at risk.

Michigan has more than 25,000 confirmed coronavirus cases as of April 14. Wayne County, where Detroit is located had more than 11,000 cases and 760 deaths.

“At this time, the trajectory of Detroit is unfortunately even more steep than that of New York,” Dr Teena Chopra, the medical director of infection prevention and hospital epidemiology at the Detroit Medical Center, was quoted as saying by the Associated Press.

The largest city in Illinois faces many of the same issues as New York City, and Chicago’s coronavirus statistics are starting to paint a dire picture. 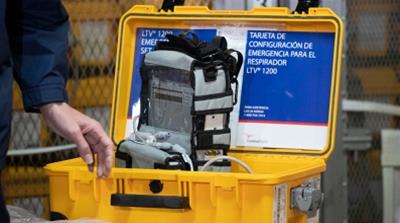 Cases have shot up in Illinois, with over 800 deaths and more than 22,000 cases as of April 14. More than 15,000 of those cases were confirmed in the Chicago area, one of the largest cities in the US with a metropolitan population of over nine million.

Officials, including those at the US National Guard and the Army Corps of Engineers, are working to set up emergency hospitals. McCormick Place, the largest convention centre in the US, has already been converted.

Illinois Governor JB Pritzker said at a coronavirus briefing that most of the models that he has seen show “that we’ll be peaking sometime in April”.

Louisiana has developed coronavirus cases faster per capita than other states, according to officials there, and no city in the state has been hit harder than New Orleans.

There were more than 5,700 cases in the Orleans Parish, which encompasses New Orleans, according to the latest figures on April 14. Data shows 276 people there died of COVID-19, the disease that the coronavirus causes.

New Orleans faces many of the same issues as Detroit. Its poverty rate is about 25 percent, according to Welfare Info, a website that helps people find benefits.

The Ernest M Morial Convention Center in New Orleans has been converted to an emergency hospital, with 1,000 beds and more capacity if needed.

The city, along with Detroit, was highlighted as a cause for concern by Dr Anthony Fauci, the head of the National Institute of Allergy and Infectious Diseases, who has become a symbol of stability in the US.

“It’s a smaller city, obviously, so they can’t be totally comparable. But the dynamics of the outbreak in New Orleans are worrisome”, Fauci said on March 30.

Florida Governor Ron DeSantis has issued a stay-at-home order for the southern part of his state as the number of coronavirus cases grows.

The order affects the four counties – Broward, Miami-Dade, Palm Beach and Monroe – that have the bulk of the state’s 21,000 cases, according to the latest figures. The order was later extended to include the entire state.

Travellers entering the state from Louisiana or New York City must quarantine for 14 days.

The US capital is relatively small, with an estimated population of slightly more than 711,000 as of 2019. However, many of those who work in DC come from both Virginia and Maryland, the two states that border the district. Its metropolitan population is more than six million.

The city’s importance as the home to most major branches of the national government and its proximity to other large population centres make it frequently visited by a wide range of domestic and international travellers.

There were more than 2,000 confirmed cases as of April 14, according to city data.

DC Mayor Muriel Bowser warned on April 3 that one in seven DC residents will likely contract the coronavirus before the pandemic ends.

Dr Deborah Birx, a health official in the US government, and coordinator of the White House’s coronavirus response team, warned last week that Pennsylvania and Colorado, along with DC, could be future hot spots.

They are starting “starting to go on that upside” of the mortality curve, Birx said.

Colorado health officials predicted 33,277 deaths by June 1 in the worst case and 379 in the best case, according to local media. There were more than 7,600 cases on April 14, with over 1,000 of those being in Denver, the largest city. At least 308 people had died, state authorities said.

Pennsylvania had more than 25,000 cases of coronavirus on April 14, with 608 deaths, according to the state’s tally. More than 7,000 of those cases were in Philadelphia, the state’s largest city.

While these cities are drawing concern, every population centre is at risk, due to the nature of the virus, officials say.

Authorities continue to encourage social distancing and keeping travel outside the home to a minimum.