Health authorities around the globe continue to scramble to contain the coronavirus pandemic with the United States now caught in the contagion’s crosshairs.

The virus, which causes a respiratory illness called COVID-19, has spread to more than 180 countries and territories on six continents, infecting 1.6 million people and killing nearly 100,000.

The vast majority of infections and deaths had previously occurred in mainland China, where authorities placed a region of 60 million people under lockdown to contain the pathogen.

Spain reported 683 daily coronavirus deaths in the past 24 hours, a lower number of fatalities compared to the previous two days.

The US again recorded nearly 2,000 fatalities, while in Britain almost 1,000 victims are dying daily.

Russia reported a record one-day rise in cases of novel coronavirus, pushing the official tally to more than 10,000, a day after President Vladimir Putin said the coming weeks would prove decisive in the fight against the virus.

At least 18 countries in the Middle East and North Africa have also reported cases..

How did the outbreak begin?

On December 31 last year, China notified WHO of several cases of an unusual pneumonia in Wuhan, a port city of 11 million people in the central Hubei province. Several of the infections were linked to the Huanan Seafood Wholesale Market, which was shut down the following day.

Chinese authorities ruled out a recurrence of the virus that causes the severe acute respiratory (SARS), an illness that originated in China and killed more than 770 people worldwide in 2002-2003. On January 7, officials said they had identified a new virus, now named SARS-Cov-2.

Two days later, a 61-year-old man who had purchased goods from the Huanan Seafood Wholesale Market died from the infection – he was the country’s first known victim of the virus.

In the following weeks, the outbreak ballooned across China, spread across the border, and reached all but one of the world’s continents.

How does the virus spread?

Like other coronaviruses, the new one is transmitted from person to person via droplets when an infected person breathes out, coughs or sneezes. It can also spread via contaminated surfaces such as door handles or railings.

Infectious disease and virus specialists estimate that each person carrying the virus is passing it to two or three other people on average.

COVID-19 causes a range of symptoms. The most common include fever, fatigue and a dry cough. The disease is mild in majority of the cases.

In the most critical cases, the infection can cause severe pneumonia, multiple organ failure and death.

WHO says COVID-19 has killed about 5.9 percent of confirmed cases globally, a figure far above the fatality rate for the seasonal flu.

Where did the new coronavirus come from and how deadly is it?

Coronaviruses are zoonotic, meaning they are transmitted between animals and people. While the animal source of the new type of virus is not yet clear, scientists suspect bats may be its host, and say the virus passed to humans via another animal species, such as the pangolin.

Scientists believe SARS also originated in bats and was most likely passed on to humans through cat-like civets. The coronavirus that causes the Middle East Respiratory Syndrome (MERS) jumped to humans via camels. Below, we look at the most deadly disease outbreaks that originated in animals. 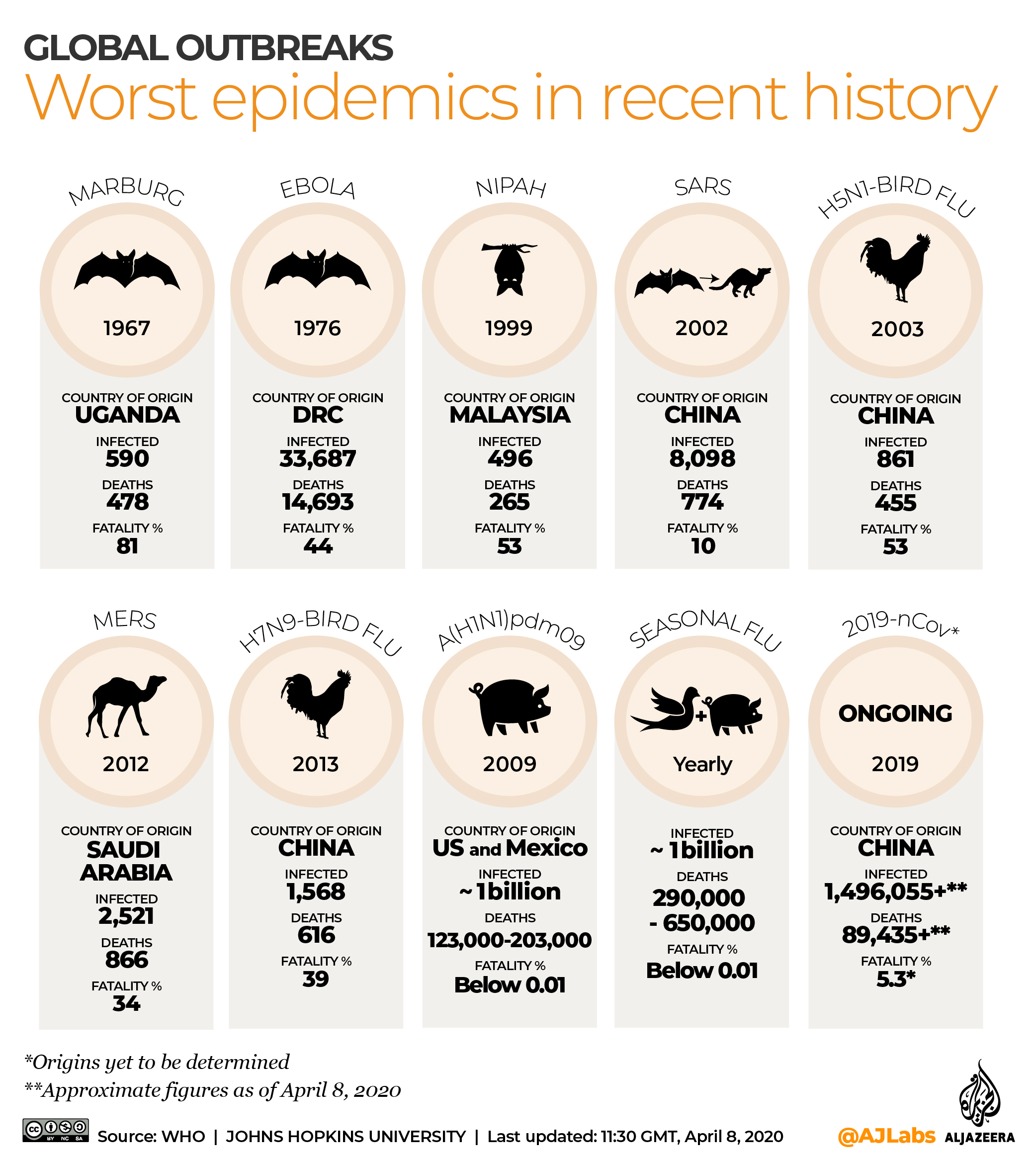 Older people, especially those with chronic illnesses such as heart or lung diseases, are more at risk. Among younger people, deaths are rarer, according to WHO, but some have made headlines, such as the 34-year-old Chinese doctor who was reprimanded by authorities for sounding an early alarm about the virus only to later succumb to it.

On average, however, WHO says people with mild cases recover in about two weeks, while those who are sicker can take anywhere from three to six weeks.