A resurgent Joe Biden has scored sweeping victories across the United States with the backing of a diverse coalition and progressive rival Bernie Sanders seized Super Tuesday’s biggest prize with a win in California as the Democratic Party’s once-crowded presidential field became a two-man contest.

The two Democrats, lifelong politicians with starkly different visions for the US’s future, were battling for delegates as 14 states and one US territory held a series of high-stakes elections that marked the most significant day of voting in the party’s 2020 presidential nomination fight. The winner of the primary season will take on President Donald Trump in the November general election.

The exit of Michael Bloomberg from the race on Wednesday morning left Massachusetts Senator Elizabeth Warren as the last barrier between either man and the nomination. Warren, who finished in a disappointing third place in her home state, was said to reassessing her candidacy on Wednesday.

The contours of a nomination fight pitting Biden against Sanders, each leading coalitions of disparate demographics and political beliefs, were crystallising by day’s end as the former vice president and the three-term senator spoke of and to each other through duelling victory speeches 4,000 kilometres (2,500 miles) apart on Tuesday night, even if they avoided using each other’s name.

“People are talking about a revolution. We started a movement,” Biden charged in Los Angeles, knocking one of Sanders’ signature calls for a “political revolution”.

Without citing his surging rival by name, Sanders swiped at Biden from Burlington, Vermont.

“You cannot beat Trump with the same-old, same-old kind of politics,” Sanders declared, ticking down a list of past policy differences with Biden on Social Security, trade and military force.

“This will become a contrast in ideas,” he added. “We’re going to win the Democratic nomination and we are going to defeat the most dangerous president in the history of this country.”

The balance of Super Tuesday’s battlefield – with Biden winning at least nine states and Sanders four – raised questions about whether the Democratic primary contest will stretch all the way to the July convention or be decided much sooner.

Biden’s strong finish punctuated a dramatic turnaround in the span of just three days when he leveraged a blowout victory in South Carolina to score sweeping victories on Tuesday that transcended geography, class and race. His victory there prompted former South Bend, Indiana, Mayor Pete Buttigieg and Senator Amy Klobuchar to drop out of the race and endorse the former vice president.

Biden showed strength in the Northeast with a win in Massachusetts, won Minnesota in the upper Midwest and finished on top across the South in Virginia, Alabama, North Carolina, Tennessee and Arkansas – in addition to Oklahoma. He gained an unexpected victory in Texas, where he was neck-and-neck with Sanders for much of the night, and the New England state of Maine was not called in his favour until Wednesday afternoon.

Sanders opened Super Tuesday as the undisputed Democratic frontrunner and was in a position to claim an insurmountable delegate lead. And while he scored the night’s biggest delegate-prize in California, he scored just three other decisive victories, winning his home state of Vermont, along with Utah and Colorado.

Still, Sanders proved he could deliver in perhaps the greatest test of his decades-long political career. His success was built on a base of energised liberals, young people and Latinos. And his conclusive win in California marks a huge reversal in a state he lost four years ago.

In Biden and Sanders, Democrats have a stark choice in what kind of candidate they want to run against Trump.

Sanders is a 78-year-old, self-described democratic socialist who relies on an energised coalition of his party’s far-left flank that embraces his longtime fight to transform the nation’s political and economic systems.

Biden is a 77-year-old lifelong leader of his party’s Washington establishment who emphasises a more pragmatic approach to core policy issues like healthcare and climate change.

Biden racked up his victories despite being dramatically outspent and out-staffed. Moderate rival Bloomberg, for example, poured more than $19m into television advertising in Virginia, while Biden spent less than $200,000. Bloomberg spent more than half-a-billion dollars in Super Tuesday states overall.

Black voters have been key to Biden’s success. Biden, who served two terms as President Barack Obama’s vice president, won 60 percent of the black vote in Alabama, where African Americans made up more than half the Democratic electorate on Tuesday. Bloomberg earned 25 percent and Sanders won about 10 percent of African American votes, according to AP VoteCast, a wide-ranging survey of the electorate.

Perhaps another theme of the night was long lines.

Some voters in Texas reported waiting up to five hours to vote. By 11:30pm in the state, lines were reported in several places, including Texas Southern University.

It’s 11:30 PM and there are still voters in line at TSU. This is unacceptable!

VOTING SHOULD BE EASY and not take 4+ hours. pic.twitter.com/Y0lP7EbW3V

The unusually long lines are a result of the reduction of polling stations after hundreds were closed over recent years, with rights groups saying the closures disproportionately affected minority groups.

“I think the story tonight is really about the closure of polling places across Texas and across the country,” said Charlie Bonner, communications manager for MOVE Texas, a nonpartisan organisation that encourages young people to vote.

“We’re seeing [closures] predominately in black and brown communities across Texas,” he told Al Jazeera. “And it’s having a disproportionate effect on our young people.”

Long lines were also reported in California. The Sanders campaign requested an emergency injunction on Tuesday, asking for polls in Los Angeles County to stay open for an extra two hours after reports of delays and long lines.

The county is one of several big jurisdictions in California that used new voting machines and procedures in the 14-state Super Tuesday primary, a day when millions turned out to vote.

“If you’re in line to vote, stay in line!” Sanders tweeted late in the night.

It was not immediately clear if the injunction had been granted.

As the results continue to come in, Tuesday’s delegate counts are expected to continue to shift, perhaps dramatically. Some candidates continue to hover around the 15 percent vote threshold they must hit to earn delegates.

The ultimate nominee must ultimately claim 1,991 delegates, which is a majority of the 3,979 pledged delegates available this primary season. 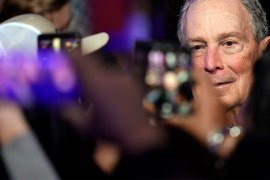 Bloomberg announced his departure from the race after a disappointing finish on Super Tuesday. 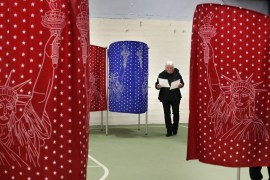 Who are the US voters behind Joe Biden’s comeback?

A crowded race defined by voters agonising over who can beat President Donald Trump in November comes into focus. 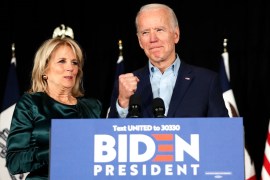 Joe Biden: Who is he and where does he stand on key issues?

A decades-long Democratic resume could prove more of a hindrance than a help to the former vice president. 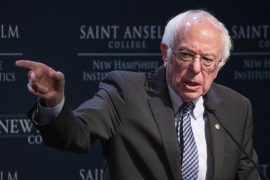 Bernie Sanders: Who is he and where does he stand on key issues?

The self-proclaimed democratic socialist has called on Americans to help him change the face of US politics.