She is in charge of propaganda affairs for North Korea and has frequently appeared at her brother’s major public events, including summits with President Donald Trump and other regional leaders.

In the statement issued on Tuesday night, she criticised South Korea’s presidential Blue House for expressing strong concerns over the North’s firing drills and urging it to stop acts that do not help reduce military animosities.

“As far as I know, the South side is also fond of joint military exercises and it is preoccupied with all the disgusting acts like purchasing ultra-modern military hardware,” Kim Yo Jong said.

“They meant they need to get militarily prepared but we should be discouraged from military exercises. Such a gangster-like assertion can never be expected from those with normal way of thinking.”

Describing the Blue House as “a mere child” and “a burned child dreading fire,” she questioned how its words and actions could be “so perfectly foolish in detail”.

Kim Yo Jong did not name liberal South Korean President Moon Jae-in, whom she has met several times.

However, she said: “The South side’s response is so regretful and disappointing but it is somewhat fortunate that it was not a direct statement of the president.”

South Korea’s Unification Ministry, which handles inter-Korean affairs, said on Wednesday it had no specific comment on Kim Yo Jong’s statement.

But spokesman Yoh Sang-key said the two Koreas should maintain mutual respect while working towards establishing lasting peace on the Korean Peninsula.

The back-to-back firing exercises were an apparent show of force by Kim, who had earlier promised to bolster his nuclear deterrent and warned of “shocking action” over now-stalled nuclear negotiations with Trump.

The latest firing drills were his first weapons tests since late November.

Kim Yo Jong’s statement was issued in her capacity as a first vice-department director of the ruling Workers Party’s Central Committee.

Kim Yo Jong’s statement “suggests that her status and influence have been expanded to such an extent as to express her opinions externally and beyond playing a role of assisting Chairman Kim Jong Un on his public activities,” said analyst Cheong Seong-Chang at South Korea’s private Sejong Institute.

Believed to be in her early 30s, Kim Yo Jong took a prominent role at the summits Kim Jong Un has held with Trump, Moon and Chinese President Xi Jinping since North Korea entered nuclear talks in 2018.

During one of the three summits with Moon in 2018, Kim Yo Jong handed her brother a pen when he signed the guestbook, and took his gloves after he shovelled mud on a ceremonial tree and a bouquet of flowers that he had been handed at the border.

Her proximity to her brother during the summit sparked outside speculation that she may be the No 2 in the North after her brother purged potential rivals seen as posing a threat to his family’s rule.

Earlier in 2018, she went to South Korea to attend the opening ceremony of the Pyeongchang Winter Olympics, becoming the first member of the North’s ruling family to visit the South since the end of the 1950-53 Korean War.

At the time, she met Moon and conveyed her brother’s invitation to meet in Pyongyang. 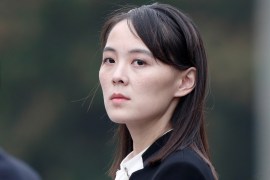 Kim Yo Jong to meet South Korean delegates and deliver flowers and a condolence message after former first lady’s death. 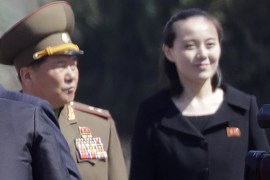 Kim Yo-jong, who is subject to US unilateral sanctions, will visit South for Olympic’s opening ceremony, Seoul says. 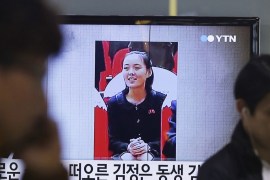