Johannesburg, South Africa – Despite all the warnings, Mama Pinda and Mama Thando decided to go to church.

Dressed in skirts and colourful headwraps, the two ladies in their late thirties met on Monday evening to walk to their church service in Troyeville, Johannesburg. Now more than ever, they felt the urge to pray.

“People are scared,” said Mama Pinda, as she hurried up the hill.

“We are chasing the coronavirus away in our prayer,” she added with a laugh.

Mama Pinda and her friend, who brought her toddler along, stubbornly tried to defy the appeals to avoid crowded spaces amid a general atmosphere of hesitation in the streets that followed the announcement by South African President Cyril Ramaphosa of a series of drastic measures to curb the spread of the new coronavirus.

Outcomes of the Special Cabinet Meeting on the #CoronaVirusSA outbreak #COVID19SA https://t.co/7wNdxac82L

When he addressed the nation on Sunday evening, Ramaphosa called “for a change of behaviour amongst all South Africans”.

Gatherings of more than 100 people were prohibited while the population was advised to minimise contact with others and do the “elbow greeting” rather than shaking hands. Schools, nurseries and universities were also ordered to remain shut from Wednesday onwards.

“Never before in the history of our democracy has our country been confronted with such a severe situation,” Ramaphosa said in a dramatic speech, which he opened by declaring a national state of disaster.

By the end of his address, everything seemed to have changed.

“Suddenly, South Africans jolted into action,” said Professor Mosa Moshabela, from the School of Nursing and Public Health of the University of Kwazulu Natal. “And that is good,” added Moshabela, who is convinced that the country’s fighting chance against the new coronavirus is social distancing and precautious behaviour. 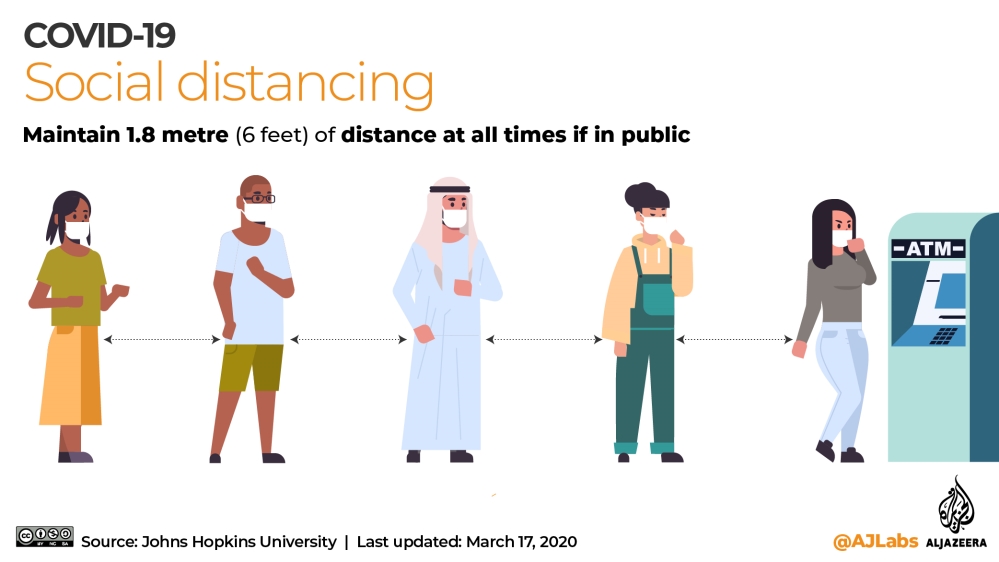 Now declared a pandemic, the outbreak of the new coronavirus that was first detected in China late last year has infected nearly 200,000 people in more than 150 countries.

COVID-19, the highly infectious disease caused by the virus, has so far killed almost 8,000 people, while more than 81,000 others have recovered. Across Africa, the number of registered infections has risen to 418 in 30 countries, while South Africa’s government has been one of several in the continent to impose travel restrictions on European countries and the United States.

In the days before Ramaphosa’s speech, South Africans had been aware of “corona” but did not seem too concerned about it as the country of some 59 million people had only registered just a few dozen cases, all of which involved international travellers.

But over the past 48 hours, a sense of insecurity has largely swept through South Africa as it is getting ready for the shutdown. Measures other countries had taken gradually over weeks, such as closing schools, imposing severe domestic and international travel restrictions and shutting entry points, South Africa took all at once. Thirty-five of 53 land entry points have been closed, as have two out of eight seaports.

By Wedneday morning, South Africa had 116 confirmed cases of COVID-19 and no deaths.

Despite the relatively low numbers, one of the main worries is what will happen once the virus reaches the crowded inner cities and townships.

“We must alert all South Africans that the internal transmission risk is now settling in,” Minister of Health Zweli Mkhize said in a statement on Tuesday. “Once this infection starts spreading in taxis and buses, it will create a new dynamic.”

COVID-19 infects people of all ages, but evidence to date suggests that older adults and those with underlying medical conditionsare at higher risk of becoming severely ill.

In South Africa, about 9 percent of the population is 60 years or older, while the situation is complicated by the country’s dual burden of HIV and tuberculosis.

“We have seven million people that are HIV-positive, and two million are not on treatment,” said Professor Susan Goldstein Public, a health specialist and deputy director of the Wits Centre for Health Economics and Decision Science.

“That is very, very worrying.”

Due to the disparate societal and demographic structure of South Africa, there is growing uncertainty about what may happen if the coronavirus is not contained.

“We also don’t know how it plays out in very poor areas where there aren’t places for quarantine – and bed-sharing is not possible,” added Goldstein, who holds some hope that the strong private health sector may open to everyone.

“Then we may have enough beds. That is what the national health insurance is currently trying to achieve.”

More than 25 years after the fall of apartheid, South Africa is still one of the most unequal countries in the world, which translates into the failure of delivering basic services to its people, including healthcare. Eighty-two percent of people living in South Africa have no health insurance and rely on public clinics and hospitals. These facilities are overcrowded and understaffed and often fall short of coping with the high amount of communicable and infectious diseases.

“We cannot contain COVID-19 with our health system alone,” Moshabela said. “If we look at how Italy [Europe’s coronavirus hotspot] is coping with the virus – we can’t do it. We will be similar to that with the difference is that we don’t have a big old population but a high number of people who have TB and HIV. Those who are going to be affected the most are going to be between 20 and 60.”

Health professionals agree that only a drastic public health response can prevent the virus from spreading at a fast pace, warning that societal factors such as lack of access to information and lack of sense of empowerment – people often do not know where to seek help or what they can do to protect themselves – complicates the fight to contain COVID-19.

Compounding the challenging situation is the country’s high unemployment rate of 29.1 percent. “Many people live under conditions of severe poverty,” Moshabela said. “Asking those to restrict movements and not go to work is not going to be an option.”

Meanwhile, in the streets of Johannesburg, the mood has shifted from cracking “corona” jokes to general tension and confusion.

In Bertrams, a low-income neighbourhood just east of Johannesburg’s inner city, people started moving into the local supermarkets to equip themselves for what is coming. Shops and other places frequented by the public intensified hygienic controls. Some started wearing face masks.

At the entrance of a local supermarket, two ladies sprayed everyone’s hands in an attempt to limit germs; all employees wore blue single-use gloves; and the managers covered their mouths with masks.

Having believed a rumour that COVID-19 comes from eating meat, some people think they have to change their diets. On his way out of a local corner shop, a man proudly held up his plastic bag and announced that he is now buying fish. “Nyama [meat] gives you corona,” he said.

False information shared in Whatsapp groups and other social media platforms perpetuate the confusion. “A Palestinian scientist has found the vaccine against corona” is one message circulating in the community groups. Another one reads: “Corona can be cured by boiling 8 tablespoons of garlic and 6 cups of water.”

Information is an important factor to contain the virus, said Moshabela, whose university will remain shut as of Wednesday. On this last day, he called a meeting in the boardroom to inform the people about the reasons behind the measures that have been taken.

“We don’t have the basics,” he said, referring to the need for people to understand why shaking hands, giving hugs or going to gatherings is not acceptable any more.

But even when information is accessible, there is denial.