Turkey‘s defence minister has warned that Ankara will change its plan of action in northwestern Syria if agreements over the last major rebel enclave in the country continue to be violated.

Ankara and Moscow, which back opposing sides in the conflict, have brokered a ceasefire for Idlib where Syrian government forces backed by Russian jets have pressed ahead with a fierce assault to capture the region from groups opposing President Bashar al-Assad.

“If the agreement kept being violated, we have Plan B and Plan C,” Defence Minister Hulusi Akar said in an interview published by the Hurriyet daily on Sunday.

“We, on every occasion, say ‘do not force us, otherwise our Plan B and Plan C are ready’.”

He did not give details but referred to Ankara’s military campaigns in Syria since 2016.

“Our observation posts there will remain in place within the agreement,” Akar said. “Despite this, if there is any obstacle, we put it clearly that we will do what’s necessary.”

As part of a 2018 deal with Russia, Turkey set up 12 observation posts in Idlib, and Turkish security sources said this week three of them have now been encircled by forces loyal to al-Assad.

Turkish President Recep Tayyip Erdogan has given Damascus until the end of the month to pull back from the outposts, warning that if they do not do so, Ankara would drive them back. He has also urged Moscow to convince the Syrian government to halt its ongoing offensive.

Since December, the Russian-backed Syrian army has pressed a blistering offensive against Idlib, home to more than three million people, retaking town after town from their opponents.

The violence has killed more than 300 civilians and sent some 586,000 fleeing towards the closed Turkish border,  threatening a new humanitarian crisis, according to the United Nations.

Turkey, which already hosts 3.6 million Syrian refugees, says it cannot absorb any more. In recent days, it  has deployed large convoys of vehicles carrying commandos, tanks and howitzers to shore up its military posts in Idlib.

On Saturday, Syrian state media said government forces had captured the Idlib town of Saraqeb, located on a junction of the strategic M5 highway. The motorway links Aleppo, once Syria’s economic hub, to Damascus and continues south to the Jordanian border.

With Saraqeb recaptured, little more than half of Idlib province remains in rebel hands, along with slivers of neighbouring Aleppo and Latakia provinces.

This could give the Syrian army “advantage to control, monitor and shell rebel positions in Idlib”, Ahelbarra said.

“The potential for a military confrontation pitting the Turkish army against the Syrian army is further increasing,” he added.

Meanwhile, a senior Turkish official warned on Sunday “all options are on the table”.

“There was a serious troop and military equipment support sent to Syria’s Idlib region in recent weeks,” the official, speaking on condition of anonymity, told Reuters news agency.

Three-hundred vehicles entered Idlib on Saturday, bringing the total to around 1,000 this month, he said.

He declined to say exactly how many new troops had been deployed, but described it as a “notable amount”.

“The observation points have been fully reinforced,” the official said. “The Idlib front has been strengthened.”

On Monday, eight Turkish military personnel were killed in shelling by Syrian government forces, prompting a response by Turkey’s army.

Idlib has long been a destination for civilians and rebel fighters who were either displaced or fled the government’s offensive elsewhere in Syria. Ankara backs certain rebel groups opposing al-Assad’s rule.

The Syrian government and Russia maintain the military operation in Idlib is aimed at driving out “terrorists” from the region, in accordance with the 2018 agreement. 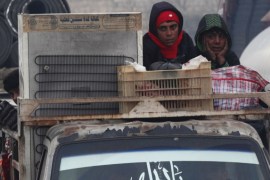 Saraqeb is considered a strategic prize for the Syrian government as it seeks to regain control of M4 and M5 highways. 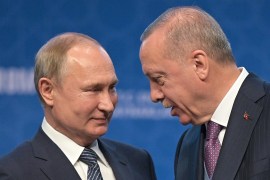 Could the killing of Turkish troops damage Turkey-Russia ties?

Though a source of friction, analysts say Ankara will not jeopardise its relationship with Moscow over events in Syria.