Hong Kong – A second government-chartered flight carrying passengers from the Diamond Princess cruise ship in Japan is due in Hong Kong on Friday, ending a two-week ordeal for city residents, who were on board the coronavirus-stricken vessel.

The first 106 of the 360 Hong Kong residents aboard the ship were evacuated on Thursday, while the remaining passengers are expected to arrive today.

Over the past two weeks, the situation on board the cruise ship docked in the port city of Yokohama has worsened, with at least 634 of 3,700 passengers and crew testing positive for the virus. At least 65 of those infected passengers are from Hong Kong.

On Thursday, two elderly Japanese passengers who were infected died of the disease, becoming the first two fatalities from the ship.

Throughout the week, several countries, including Australia and the US, have scrambled to airlift hundreds of their nationals from the port.

The nightmare aboard the Diamond Princess began on February 3 when 10 passengers and crew fell ill. The number has since ballooned into the largest coronavirus outbreak outside of mainland China.

After learning that his parents were on board the ship, Hong Kong resident Sammy Leung grew nervous, watching as the number of cases steadily climbed every day.

“My parents received their results earlier this week. Both were tested negative, and they show no symptoms,” said Leung. “So I remain upbeat.”

Leung’s parents are scheduled to return to Hong Kong on Friday.

‘Money is nothing if you die’

But hundreds of people are still anxiously waiting for a clean bill of health from Japanese officials before they can finally leave their luxury cabins, which have come to feel like prison to some.

Among those still aboard was Sunny Chen, a magician and performer from Taiwan.

“I’m no expert, so I’m not here to assign blame,” said Chen on Thursday afternoon.

“But we all have hanged in there this long. All I can hope now is to jump through this last hoop. I wish for a smooth complete close on this chapter so there would be no regret.”

Chen was tested on Tuesday, but without proof of negative results, he would not be allowed to board the flight home chartered by his government scheduled to leave on Friday, after a two-day delay.

Chen is one of the 20 or so Taiwanese on the cruise liner. He said at least three or four others were in the same situation as him, including a six-year-old girl.

Aside from the 2,670 passengers, many of whom have disembarked the ship, there are an estimated 1,100 crew members who remain on board.

Jayson P. Abalos, a Filipino crew member working in the kitchen section, of Diamond Pricess wrote on social media that although the quarantine period has already ended, they are still required to work for five days.

“We are counting the days, and it seems like it’s getting longer and longer. We are no longer functional…and we are stressed and frightened. The virus is spreading so fast inside this ship,” he said. “

“Money is nothing if you die.”

Back in Hong Kong, infection disease experts are bracing for the city containing the largest cluster of coronavirus cases outside mainland China, once all the stricken passengers have returned.

“The ship is most certainly an infected zone,” said Dr Ho Pak-leung, a microbiologist at the University of Hong Kong who oversees its centre for infection.

“The numbers are very disconcerting. Our hospitals should be all hands on deck and get ready.”

With about one in five on the ship so far testing positive, Dr Ho said the worst-case scenario for Hong Kong would add 90 cases to the current load of 69 patients.

The Hong Kong government has asked that 65 of its residents who tested positive for the virus remain in Japan for treatment, sparking anger from some family members.

Stepping up their efforts to appeal to the government, two sons of four of the passengers called a press conference on Wednesday, saying that their fathers, both in their 70s and testing positive, have been languishing in a hospital ward for days with four other patients, but had yet to receive any treatment.

The outbreak was traced to a Hong Kong passenger who disembarked on January 23, two days before the ship’s current voyage.

Days later, the 80-year-old was found to have carried the virus. Reports said the elderly passenger had also used the freshwater pools and hot tubs on the Diamond Princess.

After docking in Keelung, near New Taipei City, on January 31, the ship arrived in Yokohoma on February 3 with 10 people stricken with the virus.

By the following day, the Japanese health ministry ordered a 14-day quarantine for everyone on board and rushed to close its ports to all other cruise ships.

However, the first sign of failure at containment emerged last week when one of the Japanese health officials monitoring the quarantine came down with the virus.

Kentaro Iwata, an infection control specialist at Kobe University Hospital, warned of the situation on board, describing the rapid spread of infection as more dangerous than his previous experience dealing with the Ebola outbreak in Africa and SARS in China in 2003.

Other cruise ships plying China’s coasts over the past month may have stirred health scares, but none came close to the scale of the outbreak aboard the Diamond Princess.

“You couldn’t have a better incubator for infection. So it confirms what we already know. That this is a highly transmissible virus,” said Dr Anthony Fauci, director of the US National Institutes of Allergy and Infectious Diseases at a public forum on Wednesday.

“You amplify that when you put it in a closed space.” 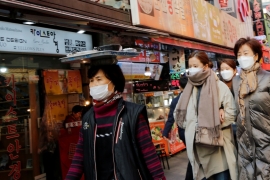 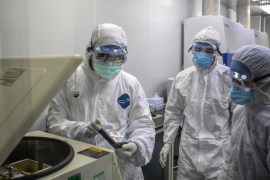