China has announced a drop in new virus cases for the third straight day, as state media released a speech by President Xi Jinping that indicated the country’s leadership was aware of the potential gravity of the outbreak far before the Chinese public was informed.

In the early days of the epidemic, which has been one of the biggest political challenges of Xi’s tenure, the president seemed to play a muted role, partly fuelling criticism of the government’s approach to the outbreak. But during a speech Xi delivered February 3, which was published by state media on Saturday, he said he gave instructions on fighting the virus as early as January 7.

It was not until late January that officials said the virus could spread between humans and public alarm began to rise.

In the address, Xi said he ordered the shutdowns at the epicentre: “On January 22, in light of the epidemic’s rapid spread and the challenges of prevention and control, I made a clear request that Hubei province implement comprehensive and stringent controls over the outflow of people.”

On January 23, Wuhan became the first city to impose an unprecedented halt on outbound transportation.

The publication of the speech could be a sign the government hopes to demonstrate it was acting decisively from the beginning of the outbreak. It has been dealing with public anger, which reached a peak earlier this month following the death of Li Wenliang, a young doctor who was reprimanded by local police for trying to spread a warning about the virus. He ended up dying of the disease himself.

In an apparent response to the outrage, the ruling Communist Party’s top officials in Hubei and Wuhan were axed and replaced last week.

The disclosure also opens Xi up to criticism over why the general population was not alerted sooner. Trust in the government’s approach to outbreaks remains fractured after the SARS epidemic of 2002 and 2003, which was covered up for months.

Slowing for a third day

State media released Xi’s speech shortly before China’s National Health Commission announced there were 2,009 new COVID-19 cases reported in mainland China on Saturday, the third day in a row the number of cases has dropped.

Meanwhile, there had been no significant increase in the number of new deaths, the commission said. To date, 68,500 cases have been reported and 1,665 people have died as a result of the virus in mainland China since the outbreak began in Hubei province in December.

The fall in new cases follows a spike of more than 15,000 on Thursday when the central province of Hubei adopted a new diagnostic method that includes clinical diagnoses in its official account.

Overwhelmed by suspected cases, the province has not been able to test every person exhibiting symptoms. The clinical diagnosis is based on doctors’ analyses and lung imaging and is intended to allow probable cases to be treated as confirmed ones without the need to wait for a lab result.

Despite the promising data, World Health Organization chief Tedros Adhanom Ghebreyesus warned on Saturday that it was “impossible to predict which direction this epidemic will take”.

“We ask all governments, companies, and news organisations to work with us to sound the appropriate level of alarm without fanning the flames of hysteria,” he said, speaking at the Munich Security Conference.

“China has bought the world time. We don’t know how much time,” he added.

The UN health body has asked China for more details on how diagnoses are being made. An international team of WHO experts will arrive in Beijing this weekend for a joint mission with Chinese counterparts. 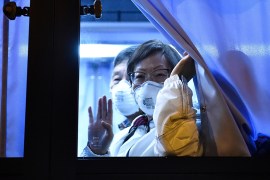 Forty US nationals infected with the COVID-19 coronavirus to stay in Japan for treatment, health official says. 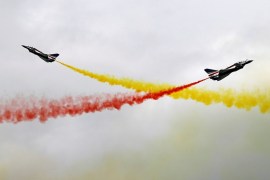 Business, but not as usual, at Singapore Airshow 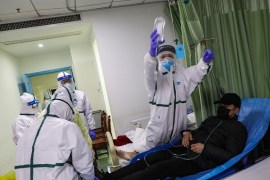 The country’s health ministry says the affected person is a ‘foreigner’ who is hospitalised and in isolation.