A Saudi-UAE-led coalition fighting Yemen’s Houthi rebels has confirmed that one of its fighter jets went down in the war-torn country.

The Royal Saudi Air Force Tornado aircraft “crashed” in northern al-Jawf province during an operation to support Yemeni government forces, the coalition said in a statement carried by the official Saudi Press Agency on Saturday.

The statement came after a spokesman for the Houthis said the group’s fighters had downed a Tornado jet belonging to “enemy forces” in the same province, according to a statement carried by their broadcaster Al Masirah TV on Friday.

Yahya Saria also said the plane was downed with an advanced surface-to-air missile.

Marwan Bishara, Al Jazeera’s senior political analyst, said it would be a “very significant” development in Yemen’s long-running war if the Houthis shot down the jet.

Separately on Saturday, Al Masirah TV quoted Houthi health officials as saying that at least 30 civilians were killed in coalition air raids in the same region that the plane had gone down.

Youssef al-Hadiri, spokesman for the Houthis’ health ministry, accused the Saudi-UAE-led coalition of hampering rescue operations on the scene of the purported attacks in the al-Jawf district of al-Masloub.

“It [the coalition] continues to carry out air raids there,” al-Hadiri told the dpa news agency, without providing more details.

A drastic surge in fighting between the warring sides since last month has exacerbated the country’s long-running war and further complicates a fragile peace process.

For months, back-channel negotiations in Oman between Saudi Arabia and the Houthis stirred modest hopes for reconciliation. But sharply escalating violence has put the political process on shaky ground.

Both sides have concentrated their forces in three main areas: Nehm, a half-hour drive from Sanaa; al-Jawf, a mountainous northern district; and Marib, a western province that saw one of the deadliest incidents in January when a missile attack on a government military camp killed more than 100 people.

Since the beginning of the conflict, tens of thousands of people have been killed and millions driven to the brink of famine in what the UN calls the world’s worst humanitarian crisis. 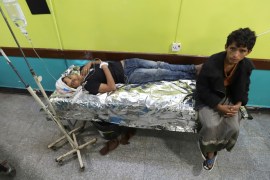 Martin Griffiths warns of collapse of peace efforts amid rise in violence between Saudi-UAE coalition and Houthis. 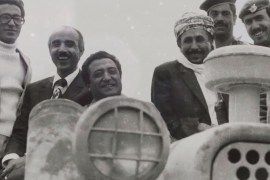 Events leading up to the 1977 murder of Ibrahim al-Hamdi, president of North Yemen, and its effects on a divided nation.

In Pictures: Spoons become a new symbol of Palestinian ‘freedom’