Yousef was worried when he heard in mid-October that Russian and Syrian government troops had entered northeastern Syria. The 24-year-old resident of Raqqa city feared the return of government forces to his hometown could endanger his life.

Within days of Syrian army units being deployed in the northern part of the province, he and his three younger brothers fled to Turkey, where they are now staying with an uncle.

Yousef, who requested that his real name not be used for his safety, said he knows of dozens of others who have fled since October last year, fearing that the Kurdish-dominated Syrian Democratic Forces (SDF) might hand over territories under their control in northeast Syria to the government of President Bashar al-Assad.

Rumours of a possible deal between the SDF and Damascus started circulating shortly after Turkey launched a military operation to push back the Kurdish People’s Protection Units (YPG), a component of the SDF considered a terrorist organisation by Ankara, from areas close to its border.

Several days later, Russia brokered a deal with Damascus, the SDF and Ankara to de-escalate tensions, which saw the deployment of Russian and Syrian government forces to the area.

In February this year, it was reported that the Syrian Democratic Council, the SDF’s political arm, started a dialogue with Damascus with Russian mediation, although the content of the talks is still not publicly known.

Since October, several protests against the return of the government have broken out in cities and villages across the region, including Raqqa province. Fear has sent some fleeing to Turkey or rebel-controlled areas in the north and west.

Yousef told Al Jazeera he took part in anti-government protests in 2011 and feared that he could be wanted by Syria’s security services.

“We young men are fleeing because we are afraid of forced conscription and revenge attacks which the militias of the regime carry out in every city and village they enter which were outside their control,” he said.

Raqqa, his hometown, was the first provincial capital to fall under opposition control after the start of the Syrian uprising in 2011.

Ali al-Ahmed, 42, another Raqqa resident, also confirmed that people have been leaving the city because of the uncertainty and fears that the SDF could strike a deal with the Syrian government. According to him, hundreds of young men have fled so far, fearing forced conscription.

“The return of the regime to Raqqa is a great danger to the people of Raqqa,” he said.

In December 2019, Russian troops visited Raqqa. A video of the visit released by Russian state-owned broadcaster RT showed Russian soldiers handing out bags of goods stamped with the Russian and Syrian government flags and talking to crowds of children.

According to Sallal al-Muftah, a member of the citizen journalist group Raqqa is Being Slaughtered Silently, the Russian army visited the village of al-Assadia north of Raqqa, not the city itself.

“They distributed some aid and filmed themselves for propaganda purposes, to legitimise their presence in Syria,” he told Al Jazeera.

In recent years, the Syrian government, with Russian and Iranian support, has managed to regain control of a number of opposition-held areas using a combination of reconciliation and evacuation deals, including the city of Aleppo, the Ghouta suburbs of Damascus and Deraa province. Raqqa residents fear the SDF could conclude a similar deal.

“In every house in the province of Raqqa, you would find people wanted by the regime, whether for participating in protests or for refusing military service,” al-Muftah said.

“In addition to unlawful demolition and confiscation of private property that belonged to people affiliated with anti-government groups, the Syrian state security apparatus has arrested hundreds of people who chose to remain and signed reconciliation agreements,” she said.

These reported violations have caused people to continue fleeing areas where the government has regained control.

Fearing the consequences of a partial withdrawal of its main backer, the US, from Syria in October 2019, the SDF, which did not join the Syrian opposition in the civil war but has engaged in limited clashes with government forces, started talks with Damascus. This engagement, however, appears to be only in its initial stage.

According to Kirill Semenov, a Moscow-based Middle East analyst, the SDF initially agreed to the deployment of government forces along the Syrian-Turkish border and at a few points along the M4 highway, including the cities of Ein Issa and Tel Tamer, but not on reconciliation.

“There was no agreement on the SDF joining the regime army or the preservation of its administration [in the territories it controls],” he added.

As long as the US maintains its military presence in northeast Syria, the SDF has no reason to conclude a deal with Damascus and hand over control of its territories to al-Assad, said Semenov.

However, there are also some who would like to see the return of the government to the area. Abdel Aziz al-Hinnedi, a Raqqa activist who fled to Germany when ISIL (ISIS) took over the city in 2014, told Al Jazeera that many in the province want Damascus to regain control, hoping this would bring back state institutions that provide basic services.

“There is cautious optimism about the return of the regime … Supporters of the regime are happy that Russian forces entered the area,” said al-Hinnedi.

The city of Raqqa and many villages and towns in the province were devastated by US-led coalition air raids during the anti-ISIL operation between 2016 and 2017. According to some estimates, between 70 and 80 percent of the city was destroyed, while its infrastructure was almost completely wiped out. Today, reconstruction efforts and international support have been limited and basic services are either absent or inadequate.

Al-Ahmad said the city still does not have electricity or running water, medicine is difficult to find, healthcare services are expensive, and fuel for transportation and heating has become unaffordable.

After fleeing ISIL’s takeover of Raqqa in 2014, he returned in 2017 following its liberation only to find his house completely destroyed as a result of the air raids. He has spent the last two years struggling to rebuild his home and is reluctant to leave again.

For Yousef, a return to Raqqa is out of the question for now, despite the lack of progress in negotiations between the SDF and the Syrian government.

“I will not come back until [there is] a complete peace solution. This means elections for parliament and president and a new constitution,” he said. 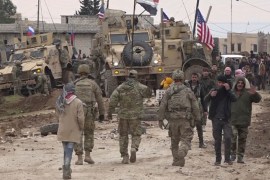 Syrian killed in rare clash between US troops, government forces

US-led coalition says its troops opened fire at checkpoint in northeast Syria after they came under small arms fire. 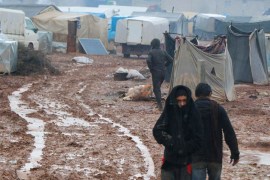 People who fled their homes in northwest Syria amid government offensive say they have been left with no shelter.