Kosovo’s highest court has ruled that the country must hold a fresh general election after the parliamentary confirmation of its new government earlier this year was declared illegal.

The Constitutional Court of Kosovo on Monday said the election of the government of Prime Minister Avdullah Hoti was invalid because the June parliamentary confirmation of his administration was passed with a vote by a legislator who has since been jailed.

The government, led by the centre-right Democratic League of Kosovo, was elected by 61 deputies in the Balkan country’s 120-seat parliament after weeks of legal wrangling following the dismissal of the previous government.

Ex-Prime Minister Albin Kurti, whose administration had lost the no-confidence vote, filed a complaint to the Constitutional Court demanding its ruling on whether the Hoti government was elected legally.

Kurti had argued that the decisive vote of legislator Etem Arifi, leader of a Roma minority party, was illegal because he had already been convicted of fraud.

Arifi was sentenced to 15 months’ jail in August 2019 for illegally using 26,000 euros ($31,800) of public money given to an NGO for personal profit. Nevertheless, he ran for the new parliament in October last year and was automatically elected to the parliament.

But in September of this year, Arifi handed himself over to police and is now serving his sentence.

It went on to call on Kosovo’s president to set the date for a new election, which must take place within 40 days.

Early elections have become routine in Kosovo, wearying a public that has low faith in a political class that seems to lurch between crises.

Since the former Serbian province declared independence in 2008, which Serbia refuses to recognise, not a single government has finished its full term.

The country’s latest poll is now set to be held in the depths of winter and under many lockdown measures due to the COVID-19 pandemic. 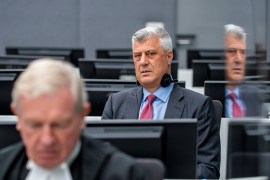 Hashim Thaci pleads not guilty to war crimes charges as he appears for first time at special international court. 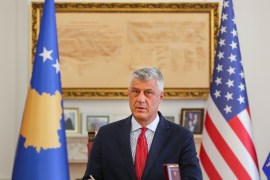 Hashim Thaci, a leader during Kosovo’s war for independence, is accused of nearly 100 murders and other atrocities. 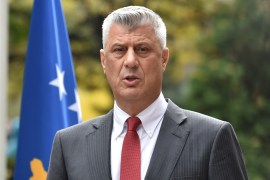 Kosovo president resigns: What you need to know in 500 words

Hashim Thaci heads to The Hague to face war crimes charges along with three other Kosovar officials.