Beirut, Lebanon – Tarek Chehab describes his 3D design factory as a “place where you can make pretty much anything — a ‘Lala-land’ for creative types like architects and product designers.”

In the past, Styro 3D, named after the versatile styrofoam used in most of its products, mainly made “decorations, wedding installations, window displays, exhibitions and movie sets — things like a Godzilla, a big rock”, Chehab said.

But his clientele has all-but disappeared in a turbulent year of massive anti-government protests, a near-total economic collapse and one of the worlds largest non-nuclear explosions, which killed 200 people and wrecked large parts of Lebanon’s capital, Beirut.

The economic crisis and post-blast devastation were greatly exacerbated by the COVID-19 pandemic, which officials have responded to with a number of lockdowns and ever-changing regulations that have further choked businesses.

To survive, a company that brands itself as “3Defying your ideas” has had to rapidly adapt.

“Don’t ask me where we got the courage to go on,” Chehab told Al Jazeera during an interview at his large factory on the eastern outskirts of Beirut.

Standing among life-sized statues of superheroes, ranging from Batman to the Incredible Hulk, the entrepreneur said Styro 3D’s precise machinery — which includes a one-armed robot resembling the iconic Pixar lamp-shade — could carve anything from large blocks of styrofoam.

Chehab is most proud of two creations: a 3D “I Love Beirut” sign set up in the city’s downtown area and a nine-metre clenched fist that he put up in the city’s central Martyrs Square in support of the 2019 October protests.

The iconic artwork has been burned down twice by counter-protesters, and each time Chehab has replaced it overnight — albeit with a bigger version.

Perhaps because he works in a place where little seems impossible, Chehab, 34, is deeply optimistic.

In 2020, that positivity was tested to its limits.

When the massive explosion ripped through Beirut just after 6 p.m. on August 4, two of Styro 3D’s employees — 22-year-old Ibrahim El-Qaffas and 23-year-old Roshdi al-Gamal — were killed.

El-Qaffas perished when a wall caved in on him, al-Gamal as he walked to the supermarket. Soon after, three employees chose to quit, some after seeing el-Qaffas in his dying moments.

Earlier in the year, frustration with Lebanon’s deepening economic crisis and the lack of political will to transform in the wake of anti-government uprising drove two employees to seek their fortunes abroad. Another one left the country following the port explosion.

A business of 24 employees before the crisis, Styro 3D now has 16. Those who remain have seen their wages lose more than half their value due to the depreciation of the Lebanese pound against the dollar — and that’s after Chehab slightly increased wages “so people can survive.”

The currency’s 80 percent depreciation — caused by mismanagement of the financial sector and an acute shortage of United States dollars — effectively wiped out the savings of millions of Lebanese.

“The local market is pretty much dead,” Chehab says, noting projects for NGOs now make up the lion’s share of their locally focused work.

On a recent day, workers were putting together a nativity scene for one of Beirut’s worst-affected neighbourhoods, as well as a large candlestick with an orange cloth that fluttered like a flame by the power of a small fan. The names of blast victims were going to be written around its base, Chehab said. “It’s hard to find the Christmas spirit.”

Memorials and clenched fists may capture Lebanon’s zeitgeist, but they are not enough to keep Styro 3D afloat.

So in the aftermath of the port explosion, the company pivoted to producing wooden frames and doors to rebuild homes and businesses damaged in the incident.

The wood-carving side of their business has picked up since. But to stay afloat long-term, Chehab is in the process of shifting his company towards an export-focused model that aims to bring in so-called “fresh” money, or hard currency, from abroad. He is also ramping up online sales, which have spiked amid COVID-related business closures.

Styro 3D’s nimbleness is a harbinger of what economists have said must be a greater change in Lebanon’s economy – a shift away from an unsustainable system that imported some 80 percent of goods, to one that is more self-sustaining and export-focused.

“The private sector is clearly reeling from the depression and policy paralysis: demand has collapsed; working capital and liquidity is almost non-existent; infrastructure and basic public sector services are crumbling; and, increasingly, skilled labour is fleeing,” Amer Bisat, head of Sovereign and Emerging Markets at BlackRock told Al Jazeera.

“In other countries, a depreciation of this magnitude tends to create important sectoral shifts towards hard-currency generating activities, including exports,” he said.  “In fact, you are already hearing of this shift in Lebanon with parts of the agriculture and high-skilled design sectors able to offset domestic demand with external demand. In the long run, this could be an important and healthy development.”

Chehab is already shifting focus to two new product lines. One is luxury, custom-made bedrooms for kids that are easily transported, “so they can sleep in a helicopter, a spaceship, pretty much anything 3D.”

He says Styro 3D’s market research has shown that “someone in the Gulf or Russia who is willing to pay something like $60,000 for a sofa would be willing to spend between $10,000 and $25,000 on a fully-fledged bedroom for their kids. These are things they dream of.”

The company is also launching a new, sustainable line of model figurines made of plaster and glass powder sourced from the thousands of tonnes of glass shattered in the Beirut explosion. “It lowers our cost and we’re also using something that there is an abundance of, so it doesn’t end up in a landfill,” he said.

Business, much like life, Chehab said, “is all about how you survive, adapt, grow, because you’re going to get bad news every few years, whether it’s a family member dying or something else. How you deal with it is what really matters.”

This article is part of Al Jazeera Digital’s ongoing series profiling small businesses around the globe that have survived market disruptions from COVID-19 as well as economic challenges unique to their countries. Click here to read about small businesses in Tehran, Iran. 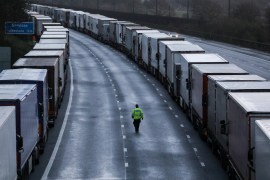 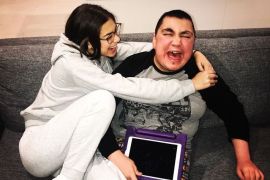 The front-line heroes of the pandemic: Young carers

Life for children tasked with caring for sick or disabled relatives has become significantly tougher because of COVID. 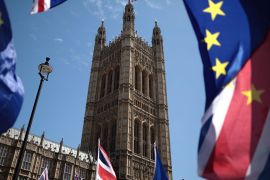 Sterling tumbled 2.5 percent but bounced back after the prime minister made another offer to salvage Brexit talks.