Leaders of three main armed rebel groups occupying large areas of the Central African Republic announced a coalition ahead of next week’s elections, while the government accused former President Francois Bozize of an “attempted coup”.

The move to form a coalition, announced on Saturday, could further increase tensions already on the rise in the troubled country ahead of presidential and legislative votes on December 27, where the opposition fears massive electoral fraud.

The armed groups decided “to combine all of our movements into a single entity, called the Coalition of Patriots for Change or CPC, under a unified command”, they wrote in the statement.

The CPC invited “all other armed groups to join”. They also urged its members to “scrupulously respect the integrity of the civilian population” and to allow vehicles belonging to the United Nations and to humanitarian groups to circulate freely.

Meanwhile, the government said on Saturday that Bozize was currently near the city of Bossembele, about 150km (90 miles) northwest of Bangui and was intending to march on the capital with his men.

“This is clearly an attempted coup d’etat that the government denounces during this electoral period,” said government spokesman Ange-Maxime Kaagui.

He accused Bozize’s troops of having “cowardly murdered three gendarmes”, as well as a military engineer, without giving further details.

The UN mission in the CAR, MINUSCA, said on Friday that its blue helmet forces were on “maximum alert” to prevent armed groups from disrupting the elections.

Bozize, who recently returned after years in exile, has been barred from running in the election by the country’s top court as he had been sought in an international arrest warrant filed by the CAR on charges including murder, arbitrary arrest and torture.

The CAR spiralled into a conflict in 2013 when Bozize was overthrown as the president by the Seleka, a rebel coalition drawn largely from the Muslim minority.

The coup triggered a bloodbath between the Seleka and so-called “Anti-balaka” self-defence forces.

France intervened militarily in its former colony and after a transitional period, elections were conducted in 2016 and won by President Faustin-Archange Touadera.

Intercommunal fighting has receded in intensity in the last two years, but armed groups hold sway over two-thirds of the country, often fighting over resources.

The new coalition, the CPC, unites all the groups that emerged from the Seleka forces with Anti-balaka fighters against Touadera’s government.

According to UN and humanitarian sources on Friday, the rebel armed groups have secured control of key routes leading to the capital Bangui.

“Reinforcement of the MINUSCA resources, including with air assets, is a response to the violence committed by these armed groups and which also affected Yaloke and Bozoum”, towns just about 200km (125 miles) from Bangui, killing two members of government forces, the UN mission said.

Al Jazeera’s Nicolas Haque, reporting from Dakar, Senegal, said rebel groups called for matches on the capital in a statement because they say Touadera is not respecting the agreement signed in 2019 to give these armed groups’ leaders position in government and funds to let them disarm.

“So that’s why they’re heading towards the capital. Now in that statement that we mentioned that was made by these armed groups, there was no mention of Francois Bozize but the government believes he is also behind this latest move to the capital Bangui.

He said the Norwegian refugee council has called this one of the most neglected crises on the earth.

“That’s what’s at stake in this election, it’s to try to establish the rule of law and the government in places where it has retreated but also come to help these millions of Central African Republic people who have seen little of their government helping them.”

In New York, UN chief Antonio Guterres condemned escalating violence in the CAR and called on all sides to work towards ensuring conditions conducive to the holding of credible and peaceful elections, his spokesman Stephane Dujarric said in a statement.

The UN chief called on all parties to “resolve their differences peacefully … in the interest of the Central African people who have for too long suffered from violence and instability”.

Thierry Vircoulon, the coordinator at the Observatory for Central and Southern Africa for French Institute of International Relations, told Al Jazeera that the move to form a coalition reflects fears among rebel groups over the unfairness of the election and that they would not be able to reach an accommodation with Touadera if he wins.

“I think it will be an intense period between the two rounds of elections but the problem presently is that the first round of election is very compromised,” he said.

“But given the security situation right now, it’s of course impossible to organise an election.” 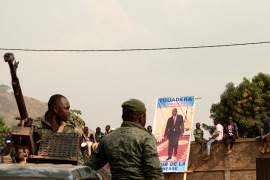 French and Russian Facebook trolls fight it out in CAR elections 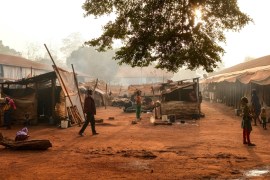 In Central African Republic, a colossal struggle against COVID-19

Experts warn coronavirus could tear through CAR at ‘lightning spread’ if the vulnerable country does not get support. 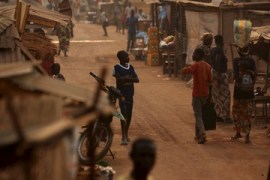 Fighting has intensified between ethnic groups and armed gangs vying for territory.