Fiji’s government has warned residents to stay alert on Friday as a slow-moving hurricane ground across the Pacific island nation, bringing gusts of wind of up to 285km per hour (177mph), causing flooding and landslides, and leaving at least two people dead.

The powerful Cyclone Yasa, a top category 5 storm, landed over the Bua province on the northern island of Vanua Levu on Thursday evening, bringing torrential rain and widespread flooding across low-lying areas of the archipelago.

As of 00:10 GMT on Friday, Cyclone Yasa has slightly weakened to category 3 storm, according to the Fiji Meteorological Service. It missed the most-populated area around the capital, Suva in the southern main island of Viti Levu, where an estimated 850,000 people live.

One person was confirmed dead in the town of Labasa in Vanua Levu island, according to the FBC News. The fatality was seeking shelter inside his home when part of the building collapsed and pinned him.

According to Prime Minister Frank Bainimarama, the second fatality is a three-month old baby from the Western Division in Viti Levu island. He did not announce other details.

“#TeamFiji, we are not out of the woods yet, keep safe and adhere to weather warnings!!” the office of Bainimarama posted on social media on Friday morning.

Ahead of a nationwide curfew overnight on Thursday, the prime minister had warned the country’s near one million population to find shelter before one of the southern hemisphere’s most intense tropical storms on record.

Images shared on social media showed roads blocked by landslides, floodwaters and fallen trees. All roads in Rakiraki, a district on the main island with about 30,000 residents, were flooded, according to local media.

Sanaka Samarasinha, the United Nations Resident Coordinator of Fiji, told Al Jazeera that the most immediate need of residents affected by the cyclone would be food and water.

“We are very much aware that there are already thousands of people, who have moved away from their homes in low-lying areas and who need continuing care in the coming days and weeks,” Samarasinha said.

He noted that many of the homes in Fiji are not built to withstand powerful storms. But he also added that with the eye of the storm missing the capital, the damage would likely be less than expected.

Parts of Fiji is still reeling from the damage brought by another category 5 Cyclone Harold, which hit the country in April.

Because of the experience of Fiji in recent months and years in dealing with similar powerful cyclones, the country has become more prepared in dealing with disasters, and the emergency food supplies are in place, Samarasinha added.

The UN will be helping with the Fiji government in coordinating the response and deliver help to the most affected areas. Currently, it has 589 staff from various agencies that can lend help in the humanitarian response.

Meanwhile, Shairana Ali, CEO of Save the Children in Fiji told the Australian Broadcasting Corporation on Friday morning that she expects the destruction “to be quite severe” in the northern Vanua Levu island.

“Some of the evacuation centres, especially the schools in the Bua district, the roofs had blown away so people had to basically move from classroom to classroom at the height of the cyclone to take shelter.”

“The wind has flattened many community buildings and crops have been flattened.”

Save the Children’s Ali said the full picture of the storm’s impact was yet to emerge from isolated rural communities and remote islands.

Bainimarama, a long-time campaigner for climate action, blamed global warming for creating the recent monster storms, which were once rare but have become relatively common.

“This is not normal. This is a climate emergency,” he wrote on social media.

The cyclone, which is moving southeast at about 22km/h (14mph), was passing through smaller islands around Lomaiviti on Friday morning.

Yasa is expected to exit the seawaters of Fiji by Saturday morning, moving southeast towards the South Pacific nation of Tonga, which has a population of more than 100,000. 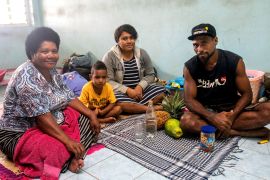 Government warns of flash floods and waves up to two-storeys high in areas where 95 percent of Fijians live. 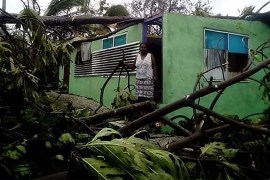 No immediate reports of deaths but buildings have been damaged and towns flooded in the Pacific island. 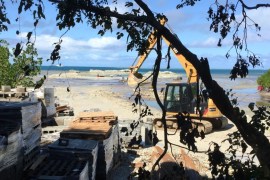 We investigate a Chinese developer accused of ruining land and intimidating locals as it builds Fiji’s biggest resort.