Karen Freedman has no concerns about taking a coronavirus vaccine, in fact, she says she is looking forward to it.

Her father died of COVID-19 in April after contracting the disease in a nursing home, and although she complies with social distancing and mask-wearing guidelines in her hometown in South Carolina, Freedman worries about contracting the virus. The 54-year-old social worker says a vaccine would enable her to finally resume activities halted by lockdowns, like going to the local swimming pool.

“I think it’s vital and essential,” Freedman says. “I am so for taking the vaccine, to me, it’s common sense, it’s obvious.”

But on day two of the roll-out of the Pfizer-BioNTech vaccine across the United States – part of the initial 2.9 million doses distributed across the country – not all Americans are quite ready to roll up their sleeves.

Freedman’s fiance, Shaun Artis, 44 says he does not plan to take a vaccine, joining a sizeable number of Americans who are sceptical about safety.

“I don’t know much about the vaccine, I’m not a doctor, I’m not a scientist, I only know, I don’t trust it,” Artis says.

According to a Pew Research Center survey published earlier this month, some 60 percent of Americans say they intend to take a COVID-19 vaccine. Though this figure is up from 51 percent back in September, pollsters say some concerns remain among the American public about potential side effects of a vaccine, given the unprecedented speed in which they have been developed, and many Americans are wary about being among the first to be inoculated.

Alec Tyson, associate director of research at the Pew Research Center says his research found that intent to take a vaccine is tied to confidence in the research and development process to deliver a safe and effective vaccine.

But this attitude is not static.

“Even among people who say they don’t currently plan on getting the vaccine, about half of those people say once others start to get it and there’s more information about it, they say it’s possible they will take it,” Tyson told Al Jazeera.

According to the survey, 21 percent of Americans say they are “pretty certain” they will not take a vaccine, even after more information becomes available.

But in order to stop the spread of the disease, or reach so-called herd immunity, US top infectious disease doctor Anthony Fauci says 75-80 percent of the population will need to be vaccinated – a challenge that is going to prove as much logistical for a country of 330 million people, as it is a battle to instil public confidence in vaccines.

The rolling out of the first vaccine comes at a pivotal moment in US politics. President Donald Trump, who has been criticised for downplaying the risks of COVID-19, slamming lockdown measures and foregoing mask-wearing in public, is due to leave office on January 20. He will be replaced by President-elect Joe Biden, who has promised to do more to defeat the pandemic and whose administration will manage the bulk of the vaccine campaign.

Amid an alarming surge of COVID-19 cases and deaths ahead of the colder months, health experts say it is going to be crucial to instil faith in vaccines that will blunt a pandemic that has killed more than 300,000 Americans, shut down parts of the economy and thrown millions out of work.

Data collected during clinical trials suggest the two-dose Pfizer-BioNTech regimen is safe for people aged 16 and over, and 95 percent effective in preventing COVID-19. A second dose is required three weeks after the first.

The Pfizer-BioNTech vaccine, as well as the Moderna candidate, which could be approved by the US Food and Drug Administration (FDA) later this week, both use a technology that has never been licensed for widespread use, raising concerns about possible long term effects, even among health practitioners.

“What I’m most concerned with, is there is no long-term safety profile, it’s only been eight months,” said Laura Minard, a Board Certified Nurse Coach from Northern California.

“Vaccines are meant to cause inflammation in the body, so that we can get an antibody response and we have no idea what that inflammatory initial response does long-term to the body,” Minard told Al Jazeera.

Two recipients of the Pfizer-BioNTech vaccine in the United Kingdom, which began administering it last week, suffered from anaphylaxis, an allergic reaction which can sometimes be severe and even life-threatening. The FDA, which issued an emergency approval for the vaccine on Friday, updated its recommendations to say those with known severe reactions to any of the components of the vaccine, should not take it.

Unlike traditional vaccines that use a small dose of inactivated or weakened virus, Pfizer-BioNTech and Moderna’s COVID-19 vaccines use mRNA, which contains instructions for the body to produce “spike proteins”, a replica of the SARS-CoV-2 virus. If or when the body is exposed to the virus, the immune system would recognise these new proteins as foreign and create antibodies to fight them.

Michael Wilkes, professor of Medicine and Global Health at UC Davis says despite the limited data about the disease itself and the potential for long term side effects of the new vaccines, the benefits of the vaccine outweigh the risks and is the only way to prevent the further large-scale loss of life.

“We’ve got great scientists vetting this, we got a very transparent process if there is one flaw in the process – and it’s no one’s fault – but it’s that there hasn’t been a long term study, or even a medium-term study,” Wilkes told Al Jazeera.

The government has signed deals with Pfizer-BioNTech and Moderna to buy a total of 200 million doses, enough for 100 million people and Trump has said that vaccines will become available to “every American who wants it” by the spring of 2021.

Wilkes believes the plan for medical workers, doctors and nurses to receive the doses before the general public, will help in “building trust” in a vaccine.

Addressing some of these concerns, FDA Commissioner Stephen Hahn said during a news conference on Sunday: “We worked quickly based on the urgency of this pandemic, not because of any other external pressure.”

Bhaskar Chakravorti, the dean of global business at the Fletcher School of Law and Diplomacy at Tufts University, who has been studying the effect of information and misinformation during the pandemic, said the top speed with which the COVID-19 vaccines were developed, as well as concern that the process was influenced by political interests, have all created “fertile ground” for fears around the vaccines.

Race is a factor, too.

Among Black Americans, a community that has been disproportionately affected by this disease, 33 percent say they have “a great deal of confidence” in the medical process, according to the Pew poll, compared with 43 percent of white Americans.

Chakravorti says this is due to the fact that historically, Black Americans have had unequal access to healthcare, and have collective historical trauma tied to the notorious “Tuskegee experiment”, the government’s secret Syphilis study on 600 Black men, who were left untreated with the disease for decades.

“There is a long shadow of the Tuskegee experiment in the Black community which inherently makes many sceptical of new medical interventions,” he says, “and a COVID vaccine is a tremendous example of that.”

Chakravorti says overall, much of the scientific information about the disease and the vaccines, is lost on the public.

“People have heard that there is a silver bullet or a magic pill that has been proven very effective,” Chakravorti tells Al Jazeera, “But after that, most people are either just hopeful that this is going to solve their problems or they are genuinely concerned, they think this is too good to be true.”

Chakravorti adds that there has also been a longstanding anti-vaccination movement in the US that has recently gained ground by promoting falsehoods on social media claiming that COVID-19 is a “hoax” and that the vaccines are accompanied by “microchips that are part of a plot by the federal government” to control people.

Meanwhile, Freedman says she has full faith in the scientific process behind the making of the vaccine, which she believes will enable her to go back to her office and socialise with friends and family, as well as not have to wear a mask in public. She says it upsets her that her own fiance has such a different outlook.

Lately, she says it has turned into such a heated debate, that the couple has stopped discussing it altogether. 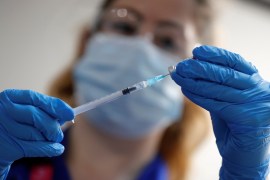 US: How the Pfizer-BioNTech COVID-19 vaccine roll-out will work

The vaccine, the first approved for emergency use in the United States, will arrive at distribution sites on Monday. 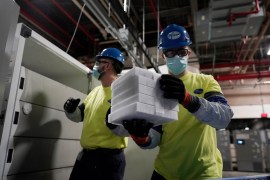 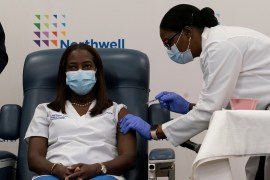 Intensive care unit nurse becomes the first person in the US to receive the Pfizer/BioNTech COVID-19 vaccine.