Turkey has appointed a new ambassador to Israel after a two-year absence, reports say.

In May 2018, Ankara withdrew its envoy over deadly attacks against Palestinians in the besieged Gaza Strip who were protesting US President Donald Trump’s decision to move the US embassy from Tel Aviv to Jerusalem.

The move to appoint Ufuk Ulutas, 40, as the new Turkish ambassador is part of an attempt to improve ties with incoming President-elect Joe Biden’s administration, a report by Al Monitor quoting “well-placed sources” revealed last week.

Ulutas, described as “very polished”, “very clever” and “very pro-Palestinian” by sources quoted in the report, studied Hebrew and Middle Eastern politics in the Hebrew University in Jerusalem. He is also an expert on Israel’s regional rival, Iran, but is not a career diplomat.

Turkey first broke off diplomatic ties with Israel in 2010 after 10 pro-Palestinian Turkish activists were killed by Israeli commandos who boarded a Turkish-owned flotilla trying to deliver aid and break Israel’s years-long maritime blockade of Gaza.

They restored ties in 2016, but relations soured again in 2018 in the aftermath of the US embassy move.

Ulutas’ appointment also comes as a number of Arab countries – Bahrain, Morocco, Sudan and the United Arab Emirates – agreed to normalise diplomatic ties with Israel in deals brokered by outgoing US President Trump.

The Palestinian leadership has slammed the deals as grave betrayals by the Arab states that further undermine Palestinian efforts to achieve self-determination.

Earlier this year, Trump proposed a so-called Middle East plan that overwhelmingly favoured Israel and was categorically rejected by the Palestinians.

Both Trump’s proposal and the recent normalisation deals have been criticised by Turkish President Recep Tayyip Erdogan, who has positioned himself as a staunch supporter of the Palestinian cause in the Muslim world.

Despite the new reported appointment of Ulutas as ambassador, it remains to be seen whether Ankara will establish full diplomatic ties with Israel.

Erdogan and Israeli Prime Minister Benjamin Netanyahu have often exchanged angry remarks, with a war of words reaching a boiling point about two years ago.

At the time, Erdogan called Netanyahu a “terrorist” in response to Netanyahu’s comments rejecting Ankara’s “moral lessons” over the Israeli army’s killing of Palestinian protesters in Gaza and labelling Erdogan as someone who “bombs Kurdish villagers”.

Erdogan had also criticised a controversial Israeli law that defined the country as the nation-state of the Jewish people. 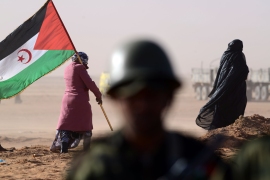 US adopts map of Morocco that includes disputed Western Sahara

Western Sahara is mostly under Morocco’s control, but tensions with pro-independence Polisario Front remain since 1970s.