Guatemala City, Guatemala – Cristina Valenzuela was one of the first to arrive. A well-known figure at protests against corruption in recent years in Guatemala City, she wore her iconic “Virgin of the Struggle” costume: a green veil, blue mask, and orange shawl.

The little cloth dolls always affixed to her protest sign called for President Alejandro Giammattei and other officials to resign – a popular refrain that intensified across the country as anger over corruption and inequalities erupted last month into anti-government protests that continue weekly.

Feminist collective members gathered outside the Ministry of the Interior on December 5, where Valenzuela joined their performance of “A Rapist in Your Path”, a feminist anthem against rape culture and state violence.

The women then marched as a feminist bloc to join broader protests against the government.

Valenzuela said corruption is not an abstract issue disconnected from historical exclusion, discrimination, and violence, and she believes the struggles against them go hand in hand. That perspective has been gaining ground in Guatemala.

“There needs to be more unity,” she said. “As people we should support each other and defend each other.”

Women have been at the forefront of struggles for social justice in the country for decades, whether they are protesting in the streets or organising behind the scenes.

Feminist groups and Indigenous movements often highlight the systemic nature of the issues of the day, and their demands for broader structural change have been gaining ground at recent protests amid an ongoing political crisis.

After the move drew quick and widespread condemnation, the politicians quickly restored the funds, but it was too late: years of simmering discontent over corruption and governance were thrust to the surface.

People took to streets and plazas around the country four weeks ago and they have held rallies every Saturday since. Congress repealed the budget bill, but most protesters were already calling for the resignations of Giammattei, Congress leaders, and the attorney general.

Vice President Guillermo Castillo said on November 20 that he had asked Giammattei to jointly resign with him for the good of the country.

Following an Organization of American States mission visit, however, the pair united on December 4 to announce a dialogue process, the closure of a contentious government coordinating body, and that Giammattei had requested all ministers and vice ministers resign for evaluation.

But the budget bill itself was never the real issue; for many Guatemalans, it represented politicians’ tendency to govern in their own interests over those of the population.

‘We want to live’

The 2021 budget cut funding for women’s programmes, underfunded centres for survivors of gender violence, and reduced the budget of the Office of the Human Rights Ombudsman.

The Ombudsman’s office is one of only two state institutions with a dedicated unit for the defense of LGBTIQ rights, said Stacy Velasquez, a leader of the Reinas de la Noche association of transgender women.

The other is a dedicated holding cell for LGBTIQ arrestees in Guatemala City’s court complex, she said.

“We do not exist in the budget,” Velasquez told Al Jazeera in Guatemala City’s central plaza after a transgender-inclusive women’s march against gender violence.

This year alone, 18 transgender women have been killed in Guatemala, Velasquez said, bringing the total over the past four years to 89. Rampant discrimination excludes them from most employment opportunities, leaving sex work as the only option for the majority, she said.

Reinas de la Noche and other groups want the government to dedicate resources to the prevention and investigation of hate crimes against LGBTIQ people and to other key issues affecting the community, including HIV and employment discrimination.

“What we are asking is to be included,” Velasquez said. “We want to live, to work, and to flourish.”

Indigenous people, and women in particular, also face ongoing discrimination. Close to half of Guatemala’s inhabitants are Indigenous Maya, and racism is historically linked to extreme violence.

More than 80 percent of the estimated 200,000 people killed during the country’s 36-year civil war between the military and guerrilla groups from 1960-1996 were Maya civilians. A United Nations-backed truth commission concluded that state actors committed genocide in some regions.

Some of Guatemala’s leading human rights groups were founded during the civil war by Maya women seeking truth and justice for relatives killed or forcibly disappeared by military and paramilitary forces.

We do not need to be afraid anymore. We are more united now, but we need to unite even more because the president is not listening to us

Today, Indigenous women are at the forefront of trials for crimes against humanity, including wartime sexual violence.

Indigenous women lawyers have been increasingly involved in their legal representation in court, said Jovita Tzul, a Maya K’iche’ lawyer working with the Centre for Human Rights Legal Action on cases involving past crimes against humanity, ongoing land rights conflicts, and the criminalisation of community leaders.

“Experiencing and feeling justice in the body of a woman is not the same [as it is for men] in a system designed exclusively for male litigants,” Tzul said at a rally on Thursday outside the Constitutional Court, where she accompanied civil war victims and survivors demanding the court rule on their challenges to the shutdown of institutions mandated to uphold peace accords.

She told Al Jazeera that women’s involvement in these cases is critical as it allows “the perspective of the women who are victims or criminalised in these proceedings” to be heard.

Indigenous women have been in the national spotlight in war crimes trials, but they are also leaders behind the scenes in their own communities.

In Tecpan, a town 80 kilometres west of Guatemala City, Marina Rodriguez and other local Maya Kaqchikel members of the Ruk’u’x Kem Iximche’ women’s association focus on passing traditional knowledge and culture down to younger generations.

“Girls rarely weave anymore. But our weaving contains our cosmovision. It is very sacred,” said Rodriguez, gesturing to her huipil, a traditional hand-woven blouse.

Ruk’u’x Kem Iximche’ has a weaving school in Tecpan and its main focus is intergenerational work to keep the Kaqchikel language and culture thriving, but the association also focuses on women’s rights.

“There is a lot of discrimination and racism,” Rodriguez told Al Jazeera. “This patriarchal, classist and racist system devalues us and criminalises us.”

Rodriguez was one of several Maya women leaders from around the country who spoke outside the presidential palace on Thursday at the end of a march led by traditional Indigenous authorities, women’s groups and land rights movements.

The president’s resignation is still a unifying demand, but calls for much deeper structural change are growing.

For instance, the Indigenous-led march called for a pluri-national constitutional assembly, which could write a new constitution and lay a foundation for a state that represents and serves everyone. Feminist movements have made the same demand.

“We do not need to be afraid anymore,” said Rodriguez. “We are more united now, but we need to unite even more because the president is not listening to us.” 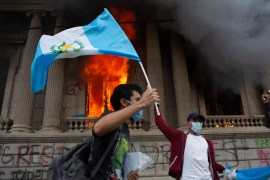 A contentious budget bill pushed thousands into the streets to call for an end to corruption, among other demands. 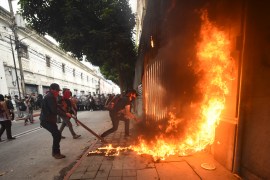 Protesters set fire to part of Guatemala’s Congress building amid growing demonstrations against the president. 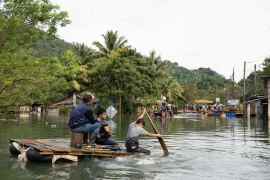 ‘That roof over there is mine’: Guatemala’s flooded communities

As flooding submerges homes in isolated communities of Alta Verapaz, many are left without supplies or places to stay.