Press advocacy and human rights groups have expressed outrage over the execution of Iranian journalist Ruhollah Zam, with some campaigners calling it a “shocking escalation” in the use of the death penalty by Iran against dissidents.

Zam, who was convicted for fuelling anti-government unrest during nationwide protests some three years ago, was captured in 2019 after years of living in exile in France. He was sentenced to death in June.

Reacting to the news of the execution on Saturday morning, Reporters Without Borders (RSF) said on Twitter it is “outraged at this new crime of Iranian justice and sees [Supreme Leader] Ayatollah Ali Khamenei as the mastermind of this execution”.

“His execution is a deadly blow to freedom of expression in Iran and shows the extent of the Iranian authorities’ brutal tactics to instil fear and deter dissent,” Amnesty said.

It added that after the Supreme Court upheld Zam’s death sentence on Tuesday, “authorities rushed to execute Zam a mere four days later, in what we believe was a reprehensible bid to avoid an international campaign to save his life”.

Tara Sepehri Far, a researcher at Human Rights Watch, called the escalation “a shocking escalation in the use of the death penalty against dissidents”, adding that Zam was executed on “vaguely defined national security charges”.

Iran is one of the world’s top executioners.

It’s appalling that in a shocking escalation in the use of the death penalty against dissidents, this morning, Iranian authorities executed Rouhollah Zam, the founder of the popular opposition telegram channel Amadnews, on vaguely defined national security charges. pic.twitter.com/1C8Rf3KqqI

Sherif Mansour, of the Committee to Protect Journalists, said Zam’s execution had seen “Iranian authorities join the company of criminal gangs and violent extremists who silence journalists by murdering them”.

“This is a monstrous and shameful act, and one which the international community must not let pass unnoticed,” Mansour said.

Zam’s website and a channel he created on the popular messaging app Telegram had spread the timings of the protests and embarrassing information about officials that directly challenged Iran’s government. His Amad News feed had more than a million followers.

Iranian officials have accused the United States as well as Tehran’s regional rival Saudi Arabia and government opponents living in exile of stoking the unrest, which began in late 2017 as regional protests over economic hardship spread nationwide.

The demonstrations represented the biggest challenge to Iran since the 2009 Green Movement protests and set the stage for similar mass unrest in November 2019.

Zam escaped Iran following the post-election protests of 2009 and was granted asylum in France.

However, he was abducted during a visit to Iraq in October 2019 by Iran’s Islamic Revolutionary Guard Corps, apparently with the assistance of Iraqi intelligence authorities, and forcibly returned to Iran, according to Amnesty.

Amnesty called on the international community, including member states of the UN Human Rights Council and the European Union “to take immediate action to pressure the Iranian authorities to halt their escalating use of the death penalty as a weapon of political repression”.

“The world must not stand by in silence as the Iranian authorities take their already horrific attacks on the right to life and freedom expression to unprecedented levels,” it said. 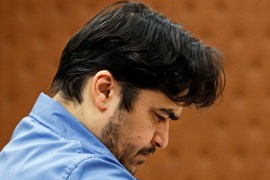 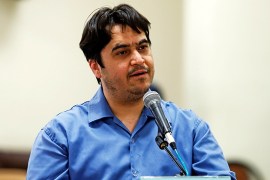 Ruhollah Zam, who was accused of fueling anti-government protests, was arrested after his return from exile in 2019.