Ghana’s opposition has rejected the presidential and parliamentary election results after President Nana Akufo-Addo was announced the winner with 51.59 percent of the vote.

“Overwhelming evidence available makes it impossible for us to accept this spurious and hurried conclusion,” Haruna Iddrisu, a member of parliament for the National Democratic Congress (NDC) party said late on Wednesday.

“We intend to take decisive and concrete steps, both with the presidential and parliamentary results, to overturn this brazen and shameless attack on our democracy,” said Iddrissu, speaking at a press conference in the capital, Accra.

The results followed a contentious poll that both candidates had said they were leading based on their parties’ tallies.

The Ghana Police Service said it recorded more than 60 incidents at Monday’s vote, in which Akufo-Addo ran for re-election against his main rival Mahama and 10 other candidates.

Five people have been killed in election-related violence since Monday, police said, marring what observers said was a well-organised vote.

The West African country is known for its stable democracy, but tensions rose on Tuesday after Mahama claimed to have won a parliamentary majority and warned Akufo-Addo, of the New Patriotic Party (NPP), against stealing the vote.

Mahama, 62, charged that Akufo-Addo, 76, had harnessed the military in a bid to sway the outcome, a claim the government said was false.

“You cannot use the military to try and overturn some of the results in constituencies that we have won. We will resist any attempts to subvert the sovereign will of the Ghanaian people,” Mahama said.

In a victory speech on Wednesday, the president-elect addressed his jubilant supporters, calling for peace.

“Now is the time, irrespective of political affiliations, to unite, join hands and stand shoulder to shoulder,” Akufo-Addo said.

Ghana has had seven peaceful transitions of power since the return of democracy almost 30 years ago, as post-electoral grievances have until now been pursued through the courts – a rarity in the troubled region. 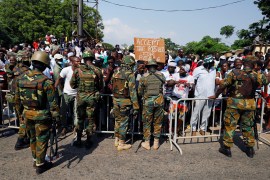 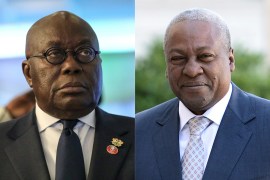 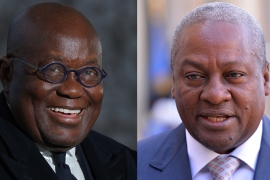 Ghana votes in tight race between incumbent and former president

Ghanaians set to elect the new parliament and president in a race dubbed ‘the battle of two giants’.