Voters in coronavirus-battered Jordan will head to the polls on Tuesday to elect a new parliament amid a deepening economic crisis worsened by the pandemic.

With few resources and a high dependency on foreign aid, particularly from the International Monetary Fund (IMF), members of the new parliament will have as their main goal the restructuring of the country’s debt, estimated at more than 100 percent of its gross domestic product (GDP).

Unemployment for the first quarter of 2020 also stands at a staggering 23 percent.

“This vote is different, with people in greater distress because of the epidemic,” Oraib Rintawi of the Al-Quds Center for Political Studies told AFP.

COVID-19 has claimed more than 1,180 lives from more than 104,800 cases in Jordan, according to health ministry data.

However, Rintawi doubted there would be a high turnout because “most Jordanians think parliament plays a marginal role in the political system,” as the formation of governments in the Hashemite kingdom is not party-based or dependent on the outcome of the vote.

There have been some calls on social media to postpone the elections, but the government has said the vote will go ahead.

Parliament was already dissolved in late September ahead of the vote, and under the law, new elections must be held within four months.

Jordanian Minister of Political and Parliamentary Affairs Musa Al-Maaytah insisted on Friday it would be better to hold the vote now rather than in a few months’ time.

“Economic, political and social life must continue,” he added.

King Abdullah II last month named veteran diplomat Bisher al-Khasawneh as prime minister ahead of the vote, after parliament reached the end of its term.

“People will vote along tribal lines for a candidate from their clan or for representatives who will provide them with services,” not for political reasons, Rintawi said.

Some 4.5 million people eligible to vote will cast their ballots for candidates to fill 130 seats in parliament, 15 of them reserved for women, from a field of 1,674 candidates running on 294 lists.

Security forces are also expected to fan out across the country’s 1,880 polling stations.

But virus curbs banning gatherings of more than 20 people have put paid to traditional shows of patronage such as candidates’ tents offering Arabic sweets and coffee.

The Islamic Action Front, the political branch of the Muslim Brotherhood and the main opposition force in Jordan, has pledged “to work to defend people’s rights, dignity and livelihood, and to confront corruption”.

Also in the running for four-year terms in parliament are representatives of the country’s main tribal clans, independents, leftists and a large number of wealthy businessmen.

Jordan has taken an economic hammering from COVID-19 with some $3bn lost in vital tourism revenues in the first nine months of 2020.

Campaigning for the legislative elections was also forced to switch to videos posted on social media platforms, especially Facebook.

Home to some of the world’s finest archaeological sites, including the ancient city of Petra, tourism normally accounts for 14 percent of Jordan’s GDP.

But the industry has been brought to a standstill by the COVID-19 pandemic.

War in the region is further taxing resources. The country is home to some 2.2 million Palestinian refugees and more than 650,000 Syrian refugees, according to the United Nations refugee agency, UNHCR.

Jordan estimates the cost of hosting Syrian refugees at about $10bn and regularly complains of a lack of international support.

In March 2020, the IMF approved $1.3bn in aid for Jordan, subsequently adding about $396m in emergency funds to soften the impact of COVID-19.

Saleh al-Armouti, a former Islamist member of parliament, put the focus squarely on economic hardships in a campaign video.

“Our poor country can no longer feed itself because of the hegemony” of the IMF, he said.

Official statistics show the poverty rate has increased to 15.7 percent, a rate which the World Bank forecasts will rise sharply because of the novel coronavirus. 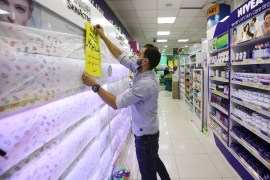 A shopping mall in Jordan removed French products from shelves in response to comments made by Emmanuel Macron. 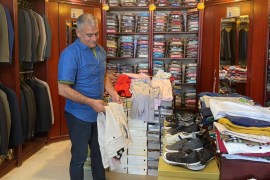 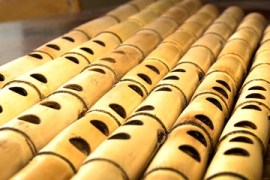 For love of the nai: Reviving the reed flute in Jordan

The nai is one of the world’s oldest musical instruments.