The United States is planning to sanction Gebran Bassil, the leader of Lebanon’s Free Patriotic Movement (FPM) party, which was founded by President Michel Aoun and is allied with Hezbollah, the Wall Street Journal (WSJ) has reported.

US President Donald Trump’s administration is expected on Friday to impose the sanctions on Bassil for assisting his ally, the Lebanese Shia group Hezbollah, the newspaper reported late on Thursday citing sources.

According to the report, the decision has been approved by the Treasury Department and Secretary of State Mike Pompeo who is expected to announce the sanctions in Washington.

The US Department of Treasury did not immediately respond to a Reuters news agency request for comment outside regular working hours.

Bassil, the son-in-law of Lebanon’s president and head of the Christian-led FPM, is also a former foreign minister.

The US deems Iranian-backed Hezbollah, which is a powerful political presence in Lebanon, to be a “terrorist” group, a charge Hezbollah denies.

In September, the US blacklisted two former Lebanese government ministers it accused of enabling Hezbollah.

“Corruption has run rampant in Lebanon, and Hizballah has exploited the political system to spread its malign influence,” US treasury secretary Steven Mnuchin said in a statement in September.

“The United States stands with the people of Lebanon in their calls for reform and will continue to use its authorities to target those who oppress and exploit them,” he added.

Fifteen years after the assassination of Lebanon’s Prime Minister Rafik Hariri, Hezbollah has risen to become the overarching power in a country that is now collapsing under a series of devastating crises.

Currently, Lebanon’s banks are paralysed, its currency has crashed and sectarian tensions are rising. 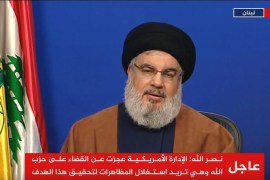 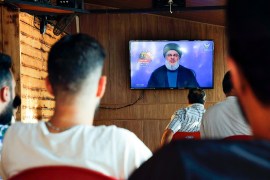 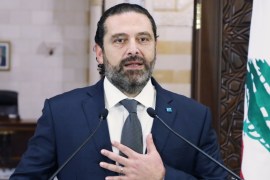