Orlando, Florida – President Donald Trump’s victory in Florida on election night kept his chances for a second term alive but unlike past presidential election cycles, this race will not hinge on the Sunshine State.

With 96 percent of precincts reporting, Trump beat Biden in Florida, 51.3 percent to 47.8.

Democratic nominee Joe Biden, 77, had a chance for a first-round knockout punch with Florida. He swung hard but missed. Trump’s campaign needed Florida’s 29 Electoral College votes – the nation’s largest battleground prize – to avoid an early night loss on Tuesday and he got them. Despite Florida playing the role of a bellwether for decades, the race for the White House will likely be won or lost someplace else.

Biden made an aggressive Florida play – he visited the state in the final days and his wife made a last-minute stop here on election day – but his campaign failed to boost turnout enough in the state, particularly in the highly populated blue counties in the southeast.

This year, Trump, 74, won 512,000 votes in that county, exceeding his 333,000 number four years ago. He would have needed to exceed Clinton in that crowded county to match support for Trump in more conservative parts of the state. To that end, his campaign missed the mark.

Early exit poll data suggest Trump’s success came from inroads among Latino voters. While Trump is not expected to win a majority of these voters in Florida or nationwide, he did appear to narrow the gap against Biden in parts of the Sunshine State where it mattered.

Preliminary exit polls from CNN suggest that support for Biden among Florida Latinos did not match that for Clinton. Biden won just more than 50 percent; Clinton had won more than 60 percent. A significant amount of support for Trump came from Cuban American voters.

The result comes after Trump’s campaign heavily invested in Latino outreach for months before election day. The campaign aired ads in Spanish throughout the summer and aimed to tie prominent Democrats who embrace the “socialist” label to Biden to woo Latinos who fled oppression and economic depression in failed socialist and communist states.

In other parts of the state, Biden did meet turnout expectations, but it just was not enough to make up for lost margins in the southeast.

Biden, for instance, made in-roads in Trump-friendly Sumter County, a region in the centre of the state north of Orlando. The county is home to the largest population of retirees who live in The Villages, a sprawling community for the elderly that consistently votes Republican. Where Clinton won just 29 percent, Biden inched Democratic numbers into the low 30s.

With 92 percent of precincts reporting in Duval County, Biden appears to have beaten Trump, a region Clinton lost.

And in Pinellas County, a notorious swing district that Trump won in 2016 after it voted Democratic for two prior presidential election cycles, Biden holds a narrow lead.

But despite narrowing margins in red districts and winning battlegrounds, it appears, ultimately, to have been a poor showing in Miami-Dade that kept him from winning. 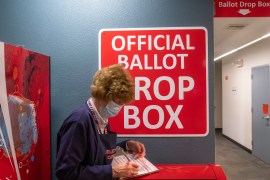 How to follow the Electoral College as the votes come in

Trump needs Florida, Biden has more options. Our guide to states the candidates need to win to capture the presidency. 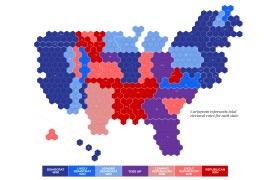