Thousands of pro-democracy activists have blocked an important junction in Bangkok to rehearse “coup prevention” strategies in the latest round of Thailand’s anti-government protests.

The country has for months been rocked by youth-led protests demanding a new constitution, reform of the untouchable monarchy, and for the resignation of Prime Minister Prayuth Chan-ocha, but they say they do not want him replaced by another general.

Prayuth, who came to power in a 2014 coup, this week played down the prospects of being overthrown or introducing martial law.

Inflatable Santa Claus figures joined the bright yellow rubber ducks that have become a symbol of the movement as some 5,000 demonstrators massed on Friday in the shadow of a motorway flyover in the north of the capital.

Natalie, a 32-year-old Bangkok office worker, said the last coup was disastrous for Thailand and warned the country should not go down that path again.

“Now is a crisis time in Bangkok and Thailand. I want new elections and to change the prime minister and form a new government to actually listen to the people,” she told the AFP news agency.

One of the protest leaders, Panupong “Mike Rayong” Jadnok, told the crowd: “The 14th coup will not happen because the people will come out and resist.”

Some protesters burned pictures of Prayuth.

As part of what they called “coup prevention” drills, protesters passed an armada of the pool toy ducks over their heads, to represent the military passing over the people to take the front row of Thai politics.

Another group paraded portraits of generals who had led past coups before ritually burning them.

Prayuth and Thailand’s army chief, General Narongpan Jittkaewtae, this week dismissed the possibility that another coup was imminent – but that has only increased speculation that one could be on the cards.

“The government has no intention of using martial law or talk about a coup,” said government spokesman Anucha Burapachaisri.

Political scientist Titipol Phakdeewanich from the Ubon Ratchathani University believes another coup is unlikely at present.

“I don’t think he will be ousted because he still has strong support from conservatives … and big businesses,” he told AFP.

But in a country that has seen a dozen coups since it became a democracy in 1932, the current round of protests, which began in July, has heightened rumours another could be looming.

The movement has broken new ground for Thai political activism by demanding changes to the monarchy, a once-revered institution which some in the kingdom are beginning to question.

Protesters also accuse the monarchy of enabling decades of military domination and have demanded curbs to the king’s powers – including his power to approve any future coups.

The Royal Palace has made no comments on the protesters although the king said recently that they were loved “all the same”.

Next week a constitutional court in Bangkok will rule on whether Prayuth has broken rules by living in an army house, despite the fact the former general is no longer in the military’s top brass.

Losing the case could see Prayuth forced out of office.

At least seven of the most prominent protest leaders face charges of insulting the monarchy, which could carry jail terms of up to 15 years, for comments they have made at different protests. 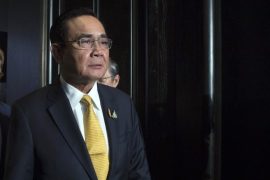 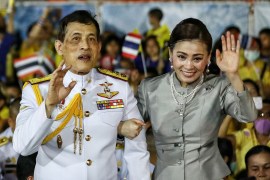 King says Thailand ‘land of compromise’ as he greets supporters

Two student leaders say they have been summoned for violating an emergency decree by joining the protest on October 15. 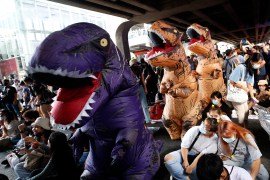 Summons issued for at least seven leaders under royal insult law, mark its first use since early 2018.