Scottish First Minister Nicola Sturgeon has said she wants to hold a second independence referendum as soon as next year, The Times newspaper reported.

The pro-independence Scottish National Party leader said she anticipates a vote will take place “in the earlier part” of the next Scottish parliament, which begins next year, The Times said.

“Scotland should have the opportunity to choose whether to become independent in the earlier, rather than the later, part of the next parliament,” Sturgeon told ITV Border, according to The Times.

Scots voted 55-45 percent against independence in a 2014 referendum but both Brexit and the British government’s handling of the COVID-19 crisis have bolstered support for independence among Scots.

The past 14 opinion surveys have suggested Scots support independence. Sturgeon’s Scottish National Party is expected to perform strongly in elections to the Scottish parliament in May.

Last month, an Ipsos Mori poll indicated 58 percent of Scots would vote to quit the four-nation United Kingdom if a referendum on Scottish independence was held this year.

To go ahead, the SNP would need to gain the required transfer of power from Westminster in order to hold a legally binding independence poll. 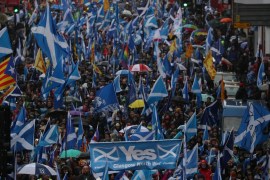 Demonstrators brave the weather in Glasgow, calling for a second referendum on Scotland’s independence. 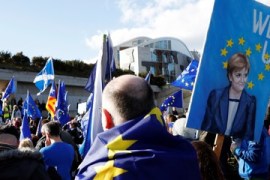 Growing backing for Scotland’s leader and disapproval of Brexit are driving renewed support for independence from the UK. 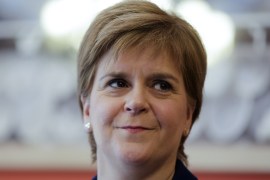 The UK government’s inept response to the COVID-19 pandemic has put Scottish independence back on the agenda. 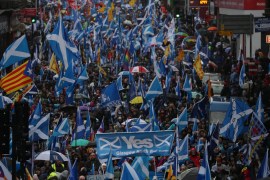 UK: Is Scotland on course to leave Britain?

Last week, a bombshell survey indicated that nearly 60 percent of Scots would vote to quit the United Kingdom.