Tehran, Iran – Iran has condemned a statement by three European powers expressing concern over its scaling back of commitments under the landmark 2015 nuclear deal.

In a statement on Saturday, the Iranian foreign ministry’s spokesman called a statement by France, Germany, and the United Kingdom – together known as the E3 – “irresponsible”.

Saeed Khatibzadeh called on the E3 to fulfil its commitments under the Joint Comprehensive Plan of Action (JCPOA), the 2015 nuclear deal signed between Iran and world powers that put curbs on Iran’s nuclear programme in exchange for the lifting of multilateral sanctions.

“The peaceful nuclear activities of the Islamic Republic of Iran are fully within the framework of international laws and completely legal and legitimate, and in line with countries’ intrinsic legal rights,” Khatibzadeh said in a statement.

The E3 said this week it remains committed to the nuclear deal, which the United States has tried to unravel since President Donald Trump unilaterally withdrew from it in May 2018 and reimposed harsh sanctions on Iran.

However, the three countries said they “continue to be extremely concerned by Iran’s actions, which are hollowing out the core nonproliferation benefits of the deal”.

After remaining committed to the nuclear deal for one year under new US sanctions, Iran started gradually scaling back its commitments in moves it said are quickly reversible.

But the European powers said they are concerned about Iran enriching uranium above the 3.67 percent threshold set in the nuclear deal, and its continued growth of a low-enriched uranium stockpile, now 12 times the JCPOA limit according to a recent report by the International Atomic Energy Agency.

“Contrary to the JCPOA, Iran is using advanced centrifuges for the production of low-enriched uranium,” the E3 said, adding Tehran is also enriching at Fordow, a facility that “has no credible civilian use”.

The E3 also expressed concern over Iranian research and development of several types of advanced centrifuges and feeding uranium hexafluoride to its IR2m cascade of centrifuges.

In his statement, Khatibzadeh said Iran is acting based on provisions of the nuclear deal in scaling back its commitments since the US exited the deal and Europe failed to deliver economic benefits promised after the lifting of multilateral sanctions.

“This is completely in line with the JCPOA and Iran has always stressed that if other parties fully implement the JCPOA, Iran’s nuclear steps are reversible,” he said. 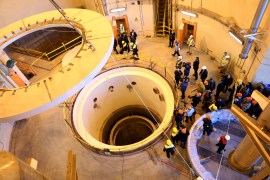 Zarif did not insist on any compensation from the US – unlike other Iranian leaders who demanded ‘damages’. 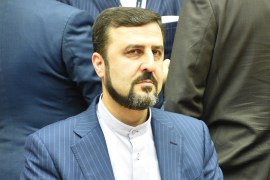 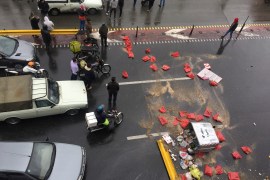 The latest blacklistings fall as President Trump, who has taken a hard line on Iran, is set to leave office on Jan 3.