Uganda’s presidential candidate Bobi Wine has been released on bail, local media reported, as police said the death toll in clashes triggered by his arrest earlier this week hit 37.

Wine, who was charged with actions likely to spread the novel coronavirus, is expected to appear back in court on December 18, the Daily Monitor reported on Friday.

The 38-year-old pop star and politician, whose real name is Robert Kyagulanyi, was arrested on Wednesday while campaigning in eastern Uganda for the January 14 general elections.

He was charged with holding mass rallies in violation of restrictions on gatherings imposed by the government to curb the spread of the coronavirus.

Earlier on Friday, authorities deployed the military across the capital Kampala and surrounding areas to help the police disperse protesters. The security forces have arrested hundreds, and used live bullets, tear gas and water cannon in efforts to quell the unrest.

Police spokesman Fred Enanga said the arrested protesters were involved in violence, including targeting members of the public who do not support Wine’s National Unity Platform (NUP) party.

“What we have seen in the last few days, that is violence, vandalism, looting, intimidation and threats, are crimes that were being committed [against] people who are not pro-NUP. This is not something that we can tolerate.”

Uganda, a nation of 42 million people, is due to hold presidential and parliamentary elections on January 14, with Wine emerging as a serious threat to veteran President Yoweri Museveni, 76, who aims to extend his rule to at least 40 years.

Wine has amassed a large following among the Ugandan youth, attracted by his bold criticism of the government, often in his song’s lyrics.

Al Jazeera’s Malcom Webb, reporting from Nairobi, said court proceedings may interfere with Wine’s campaign rallies, as could a limit of 200 people set on public gatherings set by Uganda’s health ministry and electoral commission as part of COVID-19 restrictions.

“If that is going to be enforced, from here on it’s going to be very difficult for any of the candidates to hold meaningful rallies – especially in urban areas, where they tend to attract significantly larger crowds,” Webb said.

He said four other opposition presidential candidates have suspended their election campaigns in protest at what they say is unfair treatment of Bobi Wine.

“This election is nearly two months away, ” Webb said.

“We’re waiting to see what, if any, campaigning will actually be able to go ahead between now and then,” Webb said. 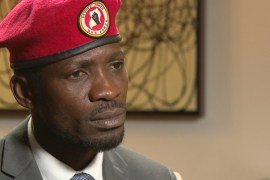 Bobi Wine: People of Uganda will rise up if Museveni rigs vote 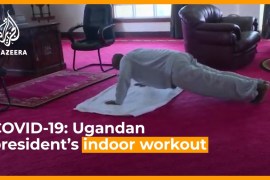 Ugandan president jogs and does push-ups in a video he released, encouraging people to exercise at home. 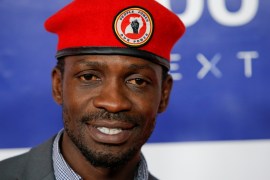