Palestinians have accused Mike Pompeo of helping Israel tighten its control over the occupied West Bank after the United States secretary of state said products from Israeli settlements in the occupied Palestinian territories can be labelled “Made in Israel”.

In a statement on Thursday, the Boycott, Divestment and Sanctions (BDS) movement also rejected Pompeo’s assertion that the Palestinian-led campaign is anti-Semitic.

BDS is a grassroots movement that seeks to pressure Israel to respect international law by ending its occupation of the Palestinian territories, ensure equal rights to Palestinian citizens of the state, and respect the right of return of Palestinian refugees.

“The BDS movement for Palestinian freedom, justice and equality, stands with all those struggling for a more dignified, just and beautiful world,” the group said in its statement.

“With our many partners, we shall resist these McCarthyite attempts to intimidate and bully Palestinian, Israeli and international human rights defenders into accepting Israeli apartheid and settler-colonialism as fate.”

Enjoyed lunch at the scenic Psagot Winery today. Unfortunately, Psagot and other businesses have been targeted by pernicious EU labeling efforts that facilitate the boycott of Israeli companies. The U.S. stands with Israel and will not tolerate any form of delegitimization. pic.twitter.com/N4oCD5IqRB

Speaking alongside Israeli Prime Minister Benjamin Netanyahu, Pompeo said earlier on Thursday that the US plans to label BDS as “anti-Semitic” and would task the Office of the Special Envoy to Monitor and Combat Anti-Semitism with identifying groups engaged in BDS.

“I want you to know that we will immediately take steps to identify organisations that engage in hateful BDS conduct and withdraw US government support,” Pompeo said.

The BDS movement said in its statement that it rejected “all forms of racism, including anti-Jewish racism” and accused the US and Israel of trying to silence advocacy for Palestinian rights.

In a separate statement, the US State Department also signalled plans to label goods made in areas “where Israel exercises the relevant authorities”, including Area C of the occupied West Bank, as “Israel”, “Product of Israel” or “Made in Israel” when exporting them to the US.

More than 60 percent of the occupied West Bank is considered Area C, and it includes Jewish-only settlements.

The Trump-Netanyahu alliance is intentionally conflating opposition to Israel's regime of oppression w/ anti-Jewish racism to suppress the struggle for Palestinian rights.

We stand with all those struggling for a more dignified, just and beautiful world. https://t.co/wqfCv4E6DK pic.twitter.com/qELtoE93B8

US President Donald Trump’s administration broke with decades of US foreign policy last year to announce that the US no longer viewed Israel’s settlements as “inconsistent with international law”.

Under the Fourth Geneva Convention, it is illegal for an occupying power to move its civilian population into the territory it occupies.

After meeting with Netanyahu on Thursday morning, Pompeo travelled to the West Bank to visit the Psagot Winery in a Jewish settlement in the occupied West Bank that has a blend named after him.

Pompeo’s visit departed from the past policy that had kept top US officials away from the settlements.

Breaking news: Israeli winemaker Yaakov Berg holds a bottle of his red blend named in honor of US Secretary of State Mike Pompeo at the Psagot Winery in the Sha'ar Binyamin industrial park near the Psagot settlement in the West Bank, north Jerusalem. @realDonaldTrump @SecPompeo pic.twitter.com/9dRYV2SfXW

But since taking office in 2017, Trump’s administration has pursued a staunchly pro-Israel policy, drawing the ire of Palestinian leaders who accused it of bias.

Among other measures, it has recognised Israel’s hold on the occupied Syrian Golan Heights, moved the US embassy from Tel Aviv to Jerusalem, and shuttered the Palestine Liberation Organization’s office in Washington, DC.

He accused the outgoing US administration of “active participation in the occupation of Palestinian lands”.

It is unclear whether Trump’s decision on settlement product labelling would be reversed by US President-elect Joe Biden’s incoming administration.

Pompeo also did not provide additional details about the Trump administration’s initiative or about what organisations would be at risk of losing funding.

“Pompeo is intoxicated by apartheid wine stolen from Palestinian land. It is opportunistic and self-serving, and it damages the chances for peace,” Ashrawi told Reuters news agency.

Both @SecPompeo & @USAmbIsrael are trespassing on Palestinian land stolen by Israel for its illegal settler-colonial enterprise. You've done a lot of damage already. Just go away! #FreePalestine https://t.co/OAhdhqfnqL

“Instead of combating systemic racism and far-right extremism in the United States, the Trump administration is undermining the common fight against the scourge of antisemitism by equating it with peaceful advocacy of boycotts,” said Eric Goldstein, the group’s acting Middle East and North Africa director.

Jewish Voice for Peace Action, a liberal US-based movement, denounced the idea that BDS is anti-Semitic, as well. The group said BDS is part of a push for equal rights for Palestinians.

“We are proudly Jewish, proudly anti-Zionist, and proudly pro-BDS,” the group tweeted. “BDS is a powerful tool in the work for Palestinian rights.”

We are proudly Jewish, proudly anti-Zionist, and proudly pro-BDS.

We are not afraid of you, Mike. https://t.co/gAkYwdF1VS 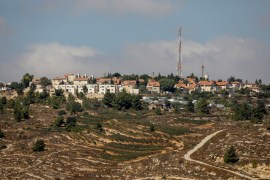 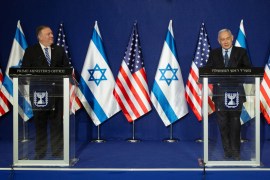 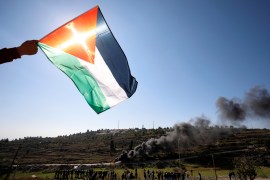 The tour came after Pompeo visited the Israeli settlement of Psagot in the illegally occupied West Bank.